Top Moments of the 2009 Season: The Elite Eight is Set

Share All sharing options for: Top Moments of the 2009 Season: The Elite Eight is Set

Closest race yet yesterday when Ingram's final TD of the National Title Game barely topped Roy Upchurch's Hokie leveling TD in the season opener by only 17 votes. Full disclosure, I went with Ingram yesterday even though Upchurch's TD was probably my favorite of the season. Why? If I'm gonna follow the "which made you happier" line....well, I'll just say Upchurch impressed the hell out of me but Ingram bulling his way over the goal line to seal the national title after Texas clawed their way back in had me flying about a mile high. But fear not Upchurch fans, now Ingram's final TD has to go against Cody 5 in the Elite Eight so Roy has one more shot at advancing into the Final Four. Anyway, on to the first round of the Elite Eight, today we've got my choice for the top moment overall, Marcell Dareus' TD against Texas vs Colin Peek's TD at Auburn. Vote away. 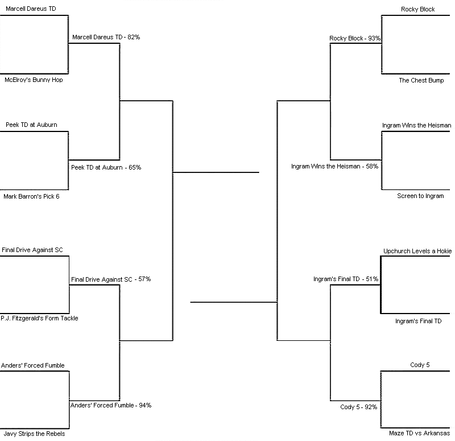