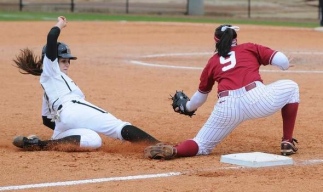 Friday, No. 7 Alabama entered into its second five-game weekend in as many weeks. This time, it is the NFCA Leadoff Classic in Columbus, Ga. Bama arrived riding a seven-game winning streak, appearing every bit like the Top 10 team it is. The first games pitted the Crimson Tide against Maryland, then taking on Iowa in the second half of the doubleheader.

Bama had a good series advantage versus the Terrapins, going 6-1 all-time and beating Maryland 7-0 the last time the teams met in 2005. This UMD team managed to hold off the Tide for most of the game, but Alabama came up big when it counted.

Charlotte Morgan took over pitching duties, getting two quick strikeouts and dispatching the Terps in the first. Alabama left one on base in the bottom of the inning, then Maryland came back up in the second. Pitcher Kerry Hickey knocked a single to right field to start things off, moving to second on a sacrifice bunt. Rightfielder Michelle Takeda followed that with another single, putting runners on the corners. Second baseman Marisha Branson reached on an error, but Takeda was tagged out at second. Another fielding error, this time a passed ball, allowed Hickey to score for what turned out to be Maryland's only run of the game.

Alabama couldn't get the offense going until the fifth, when two walks spelled a temporary end to Hickey's time in the circle. She was replaced by Kendra Knight, who had her own problems. Rightfielder Cassie Reilly-Boccia walked, loading the bases for Morgan, who reached on a fielder's choice as centerfielder Jennifer Fenton was tagged out at home. With two outs, shortstop Whitney Larsen came to the plate and -- surprise -- walks to scoring second baseman Kayla Braud. A wild pitch gave Reilly-Boccia the opportunity to score and Hickey came back on for Knight, who got the third out.

Morgan made short work of the Terps in the top of the sixth, and the Tide came back to put some more runs on the board. Like in the fifth, Bama capitalized on problems among the Maryland defense. Leftfielder Jazlyn Lunceford led off the inning with a single and took second courtesy of a sacrifice bunt by third baseman Courtney Conley. Lunceford scored on another bunt as Fenton reached on an error. Fenton didn't waste much time, stealing second and moving on to third on a wild pitch. Reilly-Boccia got it done, nailing a triple to center field and putting Fenton across the plate for Alabama's final run.

The victory moved Morgan to 2-0 on the season, going seven innings while allowing one run on four hits and striking out four.

In the afternoon, the Crimson Tide drew Iowa. It's been 11 years since the first meeting between Alabama and the Hawkeyes, a game that happened in Bama's third season in existence. Then, Iowa was ranked No. 23 in the country. It was unranked entering this game.

For the first three innings, neither team could do much of anything. The Tide broke the scoreless tie in the fourth inning. Catcher Olivia Gibson reached base on a walk at the beginning of the inning, and with one out, Fenton made it to first on an error. Keima Smith came on to pinch run for Fenton, but the extra speed wasn't needed. Braud was next up, hitting a double to center field to score both Gibson and Smith for the first runs of the game. Iowa cut the lead to one when first baseman Katie Brown took pitcher Kelsi Dunne's throw to left field for a solo home run.

In the top of the fifth inning, Conley reached on a fielder's choice when Larsen, who walked, was put out at second. Lunceford was the next batter, taking first and moving Conley to third on a fielding error. Though it can't be counted as an RBI, Lunceford provided Conley the opportunity to score when she stole second and the Iowa second baseman couldn't corral the throw. A double by Gibson sent Lunceford in and just like that, Bama went up 4-1.

Under most circumstances with three innings left, all the Tide had to do was hold tight and make sure the Hawkeyes didn't get close. However, Iowa got plenty too close for comfort. In the bottom of the sixth, Three straight singles began to change the complexion of the game. Rightfielder Tayer Leichsenring led it off, with second baseman Chelsey Carmody following up and first baseman Katie Brown getting the RBI on a hit to left field. Dunne pulled it together to strike out the next batter, but that didn't stop the action. Iowa put together a double steal with designated player Stephanie Ochoa at the plate. Brown went hell-bent for second base, and Carmody stole home to make it a game again. A strikeout and a walk later, shortstop Katie Keim hit a double to left center that drove in Brown. Just like that, the game was tied up at 4-4 with Bama coming up in the top of the seventh.

Three words: Jazlyn Lunceford, clutch. That's right -- Jaz did it again, hitting a game-winning solo home run with two outs. It's amazing that she's only a sophomore. Dunne have up a single in the bottom of the seventh, but Iowa couldn't get anyone into scoring position and Alabama collected its ninth consecutive win.