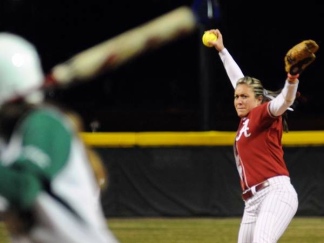 On Saturday at the NFCA Leadoff Classic, No. 7 Alabama squared off against No. 4 Michigan and Nebraska. Last year, Michigan put the Crimson Tide in a bad place by beating Bama 6-1 in the first game of the Women's College World Series. As well, the Wolverines are 5-3 against Alabama all-time. The only time Nebraska met the Tide was in the NFCA Leadoff Classic eight years ago. Saturday was set to be pretty interesting.

Charlotte Morgan, who pitched against Maryland, was called up to be in the circle versus the Wolverines, one of the best teams in college softball. It's funny, because northern teams are usually not that good at softball and baseball, considering that when the season starts, it's still damn cold. That's why teams from the SEC, Big XII and especially the PAC-10 do so much better, year in and year out.

Michigan announced its presence with authority, going up 1-0 in the bottom of the first inning. Leftfielder Bree Evans came up and knocked a double to right-center, and advanced to third on an illegal pitch. With two outs, catcher Roya St. Clair singled to center for an RBI. In the third, Alabama was able to tie up the game. On one out, second baseman Kayla Braud reached first on a bunt, and rightfielder Cassie Reilly-Boccia singled to right-center to put two runners on base. Morgan lined out, but shortstop Whitney Larsen claimed first base on an error that allowed Braud to score.

UM roared back in the bottom of the fifth, putting three runs on the board. Rightfielder Angela Findlay started it off with a walk, and third baseman Maggie Viefhaus came up with a single. After getting an out on a pop-fly, Lauren Sewell took over pitching duties for Morgan. It didn't help. First baseman Dorian Shaw drove in both Findlay and Viefhaus on a single to center. Brooke Ward came on to pinch run for Shaw, making it to third and then heading home via a fielder's choice and a throwing error.

Tide first baseman Amanda Locke cut the lead to 4-2 with a solo home run in the top of the sixth, then Michigan piled on again in the bottom of the inning. Centerfielder Molly Bausher started things off with a double, and moved to third thanks to a single by Evans. A single by Viefhaus drove in Bausher, followed by Evans scoring courtesy of an error that allowed St. Clair to reach first base safely.

With a 6-2 lead and one inning left to go, it looked like the Wolverines would hand Bama its first loss in eight games. That's when it got interesting. Centerfielder Jennifer Fenton took first on a bunt, moving over to second when Braud made a successful bunt attempt. A single by Reilly-Boccia brought Fenton around, while Braud camped out at second base. Morgan, brought back in at the pitcher's spot, singled to left field to load the bases for Larsen, who did what she had to. Larsen put a beating on the ball, hitting a grand slam to put the Tide ahead 7-6. And it still wasn't over. Coming up after a strikeout, leftfielder Jazlyn Lunceford hit a solo homer to tack on another run. After a change in pitchers, Locke was hit by a pitch, replaced by Lisa Elizondo. Elizondo took second on an illegal pitch, and became the penultimate Bama run when she was driven in by a home run by third baseman Courtney Conley.

Now, if only Alabama was playing like this in the opening series against Missouri....

In the second game of Saturday's doubleheader, the Tide came out swinging and didn't let up. Braud started things out with a bunt single, and scored on a single by Morgan to right-center. Pitcher Kelsi Dunne struck out each Cornhusker batter in the top of the second, and Locke stepped to the plate in the bottom of the inning to hit a double, eventually moving to third. That's when Fenton sent a home run over the fence in left-center field, giving Alabama a 3-0 lead.

Nebraska attempted to chip away at the lead in the top of the third, as first baseman Heidi Foland doubled with one out and was driven home thanks to a single by catcher Ashley Guile. Not to be outdone, Bama came back in the bottom of the inning with more runs. After the first out, Morgan walked, replaced on base by Elizondo. Then Larsen walked. With two baserunners, Lunceford ripped a triple to right-center that collected two RBI.

When Nebraska came back up to bat, one player reached after being hit by a pitch, and the subsequent double left two runners in scoring position. At that point, Sewell came on to pitch for Dunne. She gave up a walk and then a single to Foland, whose hit drove in a run and made second base on a bad throw. Another error allowed a second run to score, and that was the end for Sewell. She was replaced by Locke, who got the last outs in the inning.

Yet again in the fifth, Bama went yard with Locke hitting the home run this time. Going into the bottom of the second, Alabama had the chance to end the game early. Braud walked with one out on the board, then stole second. Keima Davis walked, and with two outs, Larsen singled to drive in Braud. A wild pitched gave Davis the opportunity to score, and that was it. Four games, four wins, and a 11-game win streak with one game left to go on the weekend.