Rolando McClain at the NFL Combine

Share All sharing options for: Rolando McClain at the NFL Combine 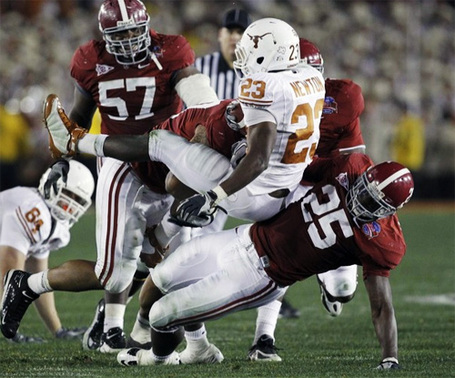 Just feed him lots of running backs and raw meat and he'll do fine.

While most of Day 2 coverage of the NFL Combine in Indianapolis focused on certain players we've all heard way too much about over the last four years, it was also time for the linebacker corps to get their moment in the sun.

And leading that group is our own Rolando McClain. Pro scouts that haven't been swooning over his formidable 6 feet 3, 254 pounds and other raw statistics, they are positively overcome when describing the man's "intangibles."

He is expected to be the first linebacker taken on April 24, being mentioned most regularly as a pick for Miami, Kansas City and Buffalo. Draftnicks say there's a realistic possibility he could go to Denver, Cleveland, Jacksonville, Pittsburgh and (oh God, please no) Oakland.

The one knock on Ro is his speed which leads some to question his effectiveness against the pro passing attacks. That won't be resolved in Indy since he'll skip the Combine 40-yard-dash and run it at Pro Day in Tuscaloosa on March 10.

McClain is the most sure-thing as a middle linebacker prospect in the draft since Patrick Willis. He's a prototypical combination of size, athleticism and intelligence. If McClain somehow turns out to be a bust, it will be a shock.

Here's what the rest of the press are saying in the wake of Day 2 of the Combine...

The best player on college football's best team in 2009 is expected to be picked in the someone in the No. 10 to No. 15 spot of the first round in April.That he will be drafted that high says something about how good pro scouts think he is. That he won't go higher says he is playing a premium position.

Giants, who could desperately use a middle linebacker after the neck injury suffered by Antonio Pierce inevitably led to his release earlier this month. In order to nab McClain, the Giants would probably have to trade up from the 15th overall pick. McClain is Pierce with more athletic ability.

While it wouldn't be my first choice to choose a linebacker at the No. 5 position in the NFL Draft, I have to admit that Rolando McClain is perfectly suited to play for the Kansas City Chiefs.

The Chiefs have the need for a linebacker like Alabama’s Rolando McClain, who would probably wind up starting for them immediately. But the safest pick could be an offensive tackle, where more prospects tend to develop as expected.

McClain is going to be an excellent pro linebacker, but he's not a centerpiece; he'll need help to be effective. In Buffalo, he'd make the abilities of Kawika Mitchell and Paul Posluszny immediately redundant, as he's the same type of player (though markedly more talented).

::UPDATE:: If you hop over to al.com they've got the transcript of Rolando's Q&A with the media at the Combine on Saturday that prompted all this attention.