Share All sharing options for: Softball: Tide upset in NFCA finale by UCF 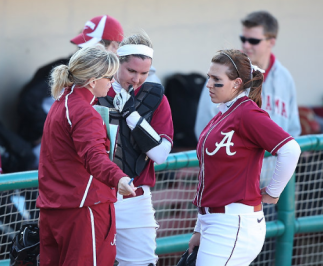 Sunday, No. 7 Alabama finished up its time in Columbus, drawing Central Florida in the last game in the NFCA Leadoff Classic. Up to this point, the Crimson Tide had an 11-game winning streak and looking at an opponent that was unranked and sub-.500, chances looked good to make the streak a dozen. Things, needless to say, did not go as planned.

How did this happen? A lot of singles in one inning for Central Florida, and not enough runs coming from the Bama offense.

The Tide started off the game going down 1-2-3, then the Golden Knights came up for what would ultimately win the game. It was Amanda Locke's turn to start in the circle, and it started off innocuously enough with a fly out. Shortstop Natalie Land started off the singles party, sending one up through the infield, making it to second on a passed ball. She was able to score when third baseman Hillary Barrow sent the ball into left field for another single. Pitcher Ashleigh Cole singled as well, moving to second on the throw, while Barrow claimed third. The second run of the inning came when first baseman Arielle Palafox singled to left, driving in Barrow and putting Cole on third. Locke appeared to be on her way to getting out of the inning by striking out the next batter, but Central Florida had one more coming. Second baseman Marissa Menendez notched an RBI single, and that was all UCF would need for the ballgame.

Neither team did much offensively in the second, but in the top of the third inning, leftfielder Jazlyn Lunceford hit a solo shot to left to put Alabama on the board. Centerfielder Jennifer Fenton followed that up with a single and a stolen base, as did second baseman Kayla Braud. With runners on second and third, first baseman Charlotte Morgan hit a fly-out, but Fenton used the chance to score. That would be it for the Tide, and it was the end of the winning streak.

Locke stayed in for four innings, recording her first loss of the season while giving up three earned runs on six hits, striking out three and walking one. Kelsi Dunne came in for the last two, striking out four. One inning can change a game. It broke in Bama's favor earlier, but it didn't in this game.

Liked that game against Michigan? The teams are going to meet up again. This weekend, Alabama invites the Wolverines and DePaul to Tuscaloosa for the Easton Challenge. Bama doesn't have a mid-week game, so this should give the Tide some time to rest up and get ready for another tough weekend of non-conference action.