Share All sharing options for: A Completely Unexpected (but Still Welcome) Installment of the Crimson and White Roundtable 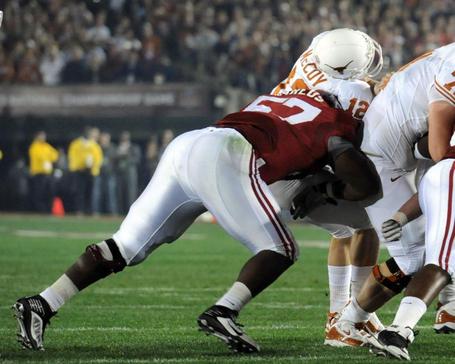 And just like that, our hopes for an ongoing roundtable were dashed!

Quickly, for the uninitiated, the Crimson and White Roundtable is an idea we stole from Black Shoe Diaries to have an ongoing and somewhat organized discussion among the Bama bloggers throughout the season that never really could get off the ground since none of us is particularly organized or was sufficiently motivated to take the thing over and make sure it was getting done.  I'd blame myself but that's just totally out of character for me, so instead we'll just doggedly insist that Colt McCoy would have kept it running to perfection if he hadn't gotten hurt and move on along with (hopefully) a fresh round of hot Q&A action thanks to the efforts of Mr. Will Heath and his shameless linking.

Well, I guess we can just keep re-living 2009 forever, but perhaps we should instead be asking "should we...?" and "why would we...?" instead.  As for should, I bow to the wisdom of our beloved Nicktator:

"That's the paradox of success," Saban says. "The moment you stop to enjoy it, you are in trouble. You have to keep moving forward. It's not what you have done that's important. It's where you are going."

That's not to say we as fans can't revel in a perfect season and celebrate the tremendous plays and all the effort put in by the team to achieve it, but that's all past and come spring practice none of it matters.  Which brings us to the "why would we just keep re-living 2009 forever?", 'cause it's not like this was our only opportunity at glory.  Think about it this way; there's a whole boatload of blue chip talent from the last two top rated recruiting classes (as well as from this year's top five rated class) that have yet to see the field in any meaningful way.  As great as the 2009 team was and as much as Cody and Javy and Anders and Ro and Peek and all the others guys that have moved on will always have a special place in our hearts for the crystal they brought home, there's a whole slew of guys on the bench just waiting to do the same thing and with just as good of a (if not a better, considering the returning talent on offense and all the blue chippers waiting their turn on defense) chance to do it, too.  So yeah, it's fun to re-live it all right now but once spring practice starts and we're combing over every minuscule shred of intel we can get to see how the secondary is shaping up and so forth, speculating on the future will be a hell of a lot funner.

I'm gonna have to agree with Will on this one and go with Javy. Losing someone with the leadership and knowledge of the defense like McClain to the NFL hurts, but I have every faith that a) Dont'a Hightower is every bit of an athlete as Ro and can fill those shoes just fine, b) we've got so many super stud LBs just waiting for their turn that this year's unit, at least on paper, will be even better than 2009's, and c) both Hightower and Mark Barron have been in the system long enough to know the defense in and out and can call the shots just fine.  But Arenas?  Kid is just a special player.  Think about all the things he has done for the team over the last two years.  Physical, shutdown corner, moves right over to Star in the nickel where he can play rover underneath while also being physical enough to play the run, was a mean pass rusher this past season, is ridiculously strong for his size, put on a clinic in form tackling every time he got near a ball carrier, and managed to set the SEC record for career kick return TDs and was only about 10 yards shy of the all time NCAA record for kick return yardage.  You just don't find all that rolled into one too often, and "replacing" him will be an almost impossible task for one player.  It will take a combination of two or three players just to handle the "corner/star/returner" aspect of his game, but everything else?  Nope.

Probably easiest answer is McElroy and the offense. By the end of the season (barring the MNC game where he played with a cracked rib), McElroy had ridden the first year starter roller coaster from dark horse Heisman candidate to OMG worstest ever to game manager back to solid QB that can win a game for you.  With a season under his belt, conference and national title rings on his fingers, all of his top targets at wide receiver, a ridiculously loaded backfield, and three of five starters on the line returning there's no reason to think the offense as a whole and the passing game in particular shouldn't be taking a big leap forward.

I think probably the natural concerns are rebuilding the secondary and finding someone to fill Cody's shoes. I may just be getting cocky here, but I'm not sure just how much of a concern those really are.  The secondary? Yeah, we lose our top three corners and a senior safety in Justin Woodall (and probably Robby Green if his suspension holds up), but Mark Barron is proving to be worth every ounce of his recruiting hype and the corner situation isn't exactly dire.  BJ Scott redshirted last year and will have gone through two years worth of spring and fall practices on top of the season and bowl practices working with the corners.  He knows the defense, he has the ability, now all he needs is a chance.  Phelon Jones already has SEC game experience at corner after having transferred from LSU and spent all of last year learning the system.  Dequan Menzie is a JUCO signee, and lord knows we don't waste scholarships on two year players unless they can make an immediate impact (a la Cody and James Carpenter).  And that's not even mentioning Dre Kirpatrick and Demarcus Milliner, two five star recruits that have been in the system for a full year (Kirkpatrick) and are already enrolled and will go through both spring and fall (Milliner) camp.  Like the LBs, on paper we have a better group of DBs than we did last year.

As for Cody? Jury is still out on whether Josh Chapman can fill that gap (or two, as it were).  He's a fine nose tackle on his own, and there are plenty of fresh bodies to rotate (Kerry Murphy, Luther Davis,and Darrington Sentimore all spring to mind), but man, you just didn't run against Cody and he made life so easy for the LBs.

Coach Saban does not approve of this question.