RBR at the Movies: Kicking It

Share All sharing options for: RBR at the Movies: Kicking It 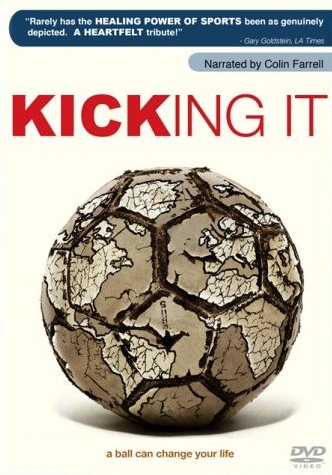 I know spring practice is starting and that we have an important basketball game today, but I'm going to get going on one of the football off-season features I've been planning for quite some time: RBR at the Movies.

Today's film is KICKING IT, a 2008 documentary about the Homeless World Cup. Yes, you read that correctly, the Homeless World Cup. The HWC was the brainchild of Scotsman Mel Young and Austrian Harald Schmied who hoped to bring attention to homelessness issues the world over as well as to help the individual participants to better their lives through learning teamwork, responsibility, setting goals, etc.

Narrated by Colin Farrell, it primarily follows six players, one each from Afghanistan, Spain, Kenya, Ireland, Russia and the United States. Their reasons for being homeless are varied: sometimes it's because of bad decisions (drugs, crime, etc.) and others because it's beyond their control (war refugees, born homeless, etc.) Because of the varius laws and/or economic conditions of their respective countries, these guys face enormous (and varied) challenges to bettering their lives.

The film follows the individuals from the selection process to their respective country's teams through their performance in the tournament and does a "where are they now" type update sequence at the end. While the HWC unfortunately can't boast a 100% success rate in turning the lives of the players around, it does have an incredibly high success rate in changing the players' lives for the better. From the HWC website:

The impact is consistently significant year on year with 73% of players changing their lives for the better by coming off drugs and alcohol, moving into jobs, education, homes, training, reuniting with families and even going on to become players and coaches for pro or semi-pro football teams.

There's some incredibly poignant moments throughout the film, but none probably moreso than seeing one of the Russian players say something to the effect of "We just want to feel like humans, even for a little bit." Not all of these guys get it turned around, but most of them do and that's a pretty powerful thing.

This film currently boasts an 8.1 out of 10 user rating on IMDB. Watch the trailer below: