Share All sharing options for: The Crimson Tide's Fastest Man 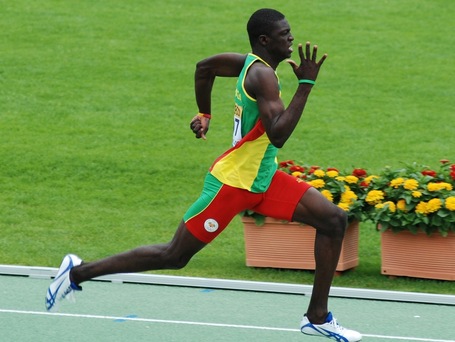 Kirani James, running for his home country of Grenada, races in the 200 meters final at the 6th IAAF World Youth Championships in Italy, July 2009. He finished with a career best 21.05.

When it comes to raw speed few can compare to Alabama's 17-year-old true freshman, Kirani James. On Saturday, the Gouyave, Grenada native earned All-American honors at the NCAA Indoor Track and Field Championships at the Randal Tyson Track Center in Fayetteville, Ark.

James entered the meet ranked second in the world in the 400 meter sprint this year and lived up to the billing. He ran a 45.63 in the final netting him second place in a field that featured the top-five fastest 400m sprinters in the world this year. Georgia sophomore Torrin Lawrence won the race by four tenths of a second.

Last week James was named the SEC Men's Freshman Runner of the Year, as voted on by the league head coaches. At the SEC Indoor Championships in February he finished second in the 400m with a career-best 45.24 - the fifth-fastest time in collegiate indoor history.