Top Moments of the 2009 Season: The Elite Eight - Cody 5 vs Ingram's Final TD

Share All sharing options for: Top Moments of the 2009 Season: The Elite Eight - Cody 5 vs Ingram's Final TD

Ok, so when I thought yesterday's might actually be close? Wrong. Anders' forced fumble makes it to the Final Four with 89% of the vote where it will face another MNC moment, Dareus' TD, for a shot at the championship game. Today we're pitting Upchurch's game winning catch at Auburn with Ingram's MNC clinching TD against Texas. If things go like I imagine they will, we'll have an Ingram-less Final Four, which just boggles my mind. Just goes to show that we've got a team that put together a perfect season and not just one star player when a Heisman winner can't even crack the Final Four. Vote away: 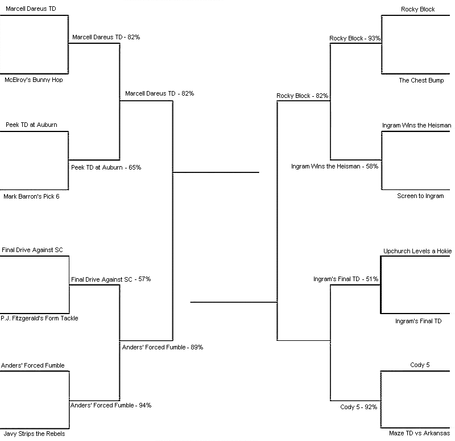