You know the routine, so let's lead things off with the roster news breaking at the moment:

McKeller was dealing with a "traumatic wrist injury" and had been through several surgeries that had failed to improve the situation, according to Saban.

You hate to hear the news for McKellar, but I cannot say it is much of a surprise. I speculated about his future several days ago, and when no mention was made of him when spring practice opened, you had to know something was up. You hate to hear the news on a personal level for McKellar, and I also hate to hear it on a football level. A few scratched their heads when we took him a year ago, but he looked good in his senior year and I, for one, was looking forward to seeing what he could do. Fortunately, though, we're not hurting for depth at tackle, and for Mr. McKellar he gets a full paid ride probably worth $35,000+ to attend The University of Alabama. We should all be so lucky. Best wishes to him.

Some more injury news today as well, as Trent Richardson largely did not participate in practice. According to a direct quote from Coach Saban:

"He strained his hamstring a little bit on Monday. He did some things in individual drills and a little bit in the kicking game, but for the most part we held him out."

No use rushing things with Trent, really, and frankly I always hope for the coaching staff to be extremely cautious with injuries like this one. Hamstring injuries always concern me simply because they tend to linger and re-aggravate themselves so easily, and honestly I always worry a bit with Richardson and nagging leg injuries just because he is so massive. I wouldn't expect anything major here, but I wouldn't be surprised to see Trent have a pretty uneventful spring.

In other news, it also seems like we are starting to get some early ideas on the offensive line. After the viewing period, Gentry Estes speculated the following:

As Saban has and will continue to insist, "there is no depth chart." But that said, here's a guess at some (very tentative) offensive line groupings I could gather from the past two practice viewings: James Carpenter (LT), John Michael Boswell (LG), David Ross (C), Barrett Jones (RG) and Alfred McCullough (RT) were in one unit. Tyler Love (LT), Anthony Steen (LG), Brian Motley (C), Chance Warmack (RG) and D.J. Fluker (RT) were in another. Remember that last season's starting center, William Vlachos, is out for spring drills after undergoing foot surgery.

That is about in the neighborhood of what I expected. Seeing the name of David Ross in there isn't overwhelmingly surprising, despite him being incognito in 2009. He was the top back-up in 2008, and with him being a fifth-year senior you had to figure he wouldn't be too far from the top of the depth chart. With that said, though, if someone really did go down during the season for an extended period of time, I still tend to think we'd probably see either Warmack of Boswell at guard. Those guys are younger and have more upside, and the difference between the three isn't that great, so that is what I would expect to happen.

At tackle, having Alfred McCullough at first-team right tackle isn't a huge surprise. He really doesn't have long frame like you expect in a modern SEC tackle -- he's only 6'2 -- and while that will hurt him some, he's a road grader who is probably comparable to Drew Davis in terms of pass protection abilities, and many people overlook the fact that he played a lot last year, particularly in goal line and short-yardage situations. I imagine it is going to be hard to keep him off the field in some capacity in 2010.

The real newsmakers at tackle that will get most attention are Tyler Love and D.J. Fluker. It's nice to see that Fluker has made his way to the second-string, and I wouldn't be the least bit surprised to see him make a tough run at the starting job at right tackle. His development has been relatively slow to date, but his physical skills are such that even a modicum of technical refinement will see him playing at a high level, so he can certainly take off at any time. Moreover, Love at left tackle is what you should expect. Barring injury, he won't start there until Carpenter departs, but Love has developed a general reputation as likely the best pure pass blocker we have on the team -- given his long frame and quickness, that shouldn't be a real surprise -- and that is why we are grooming him to inherit the left tackle position. I know what you're probably thinking... "So why not put him at right tackle now?" The short of it is that Love is still a bit on the lean side and will probably never be an overly dominant run blocker, and you generally look for more of a road-grader at right tackle. That alone will likely keep him isolated on the left side, with McCullough and Fluker set to battle things out at right tackle.

Moving on, so, all of the Michael Bowman rumors? He is still at wide receiver, and here is a picture of him courtesy of the Tuscaloosa News: 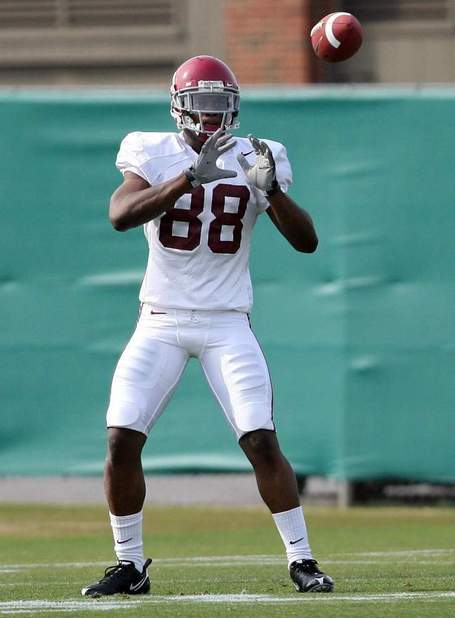 That's one big kid, I can tell you that much. He's not the 245 pounds like the rumors had him as before spring practice, but he sure as hell isn't the 210 pounds like the official roster has him at either. It certainly seems like at this point that the tight end rumors were / are largely unfounded, but I wouldn't be so quick to dismiss the possibility altogether. He wouldn't be a true tight end for us -- of course, he would have probably never been that regardless, this isn't a guy who is ever going to play at 260+ pounds -- but I wouldn't be overly shocked to see us try to use him at some point like Oklahoma used Jermaine Gresham, or some other modern-day-wide-receiver-labeled-a-tight-end.

Another photo from the Tuscaloosa News, this one of William Vlachos and Trent Richardson on the exercise bikes: 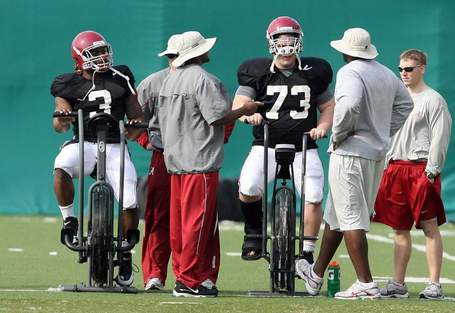 Look closely at the right foot of Vlachos in that photo. That is one very heavy-duty walking boot that he is sporting there, as it extends almost all the way up to the ankle. I speculated several days ago that Vlachos would likely miss all of spring practice, and after seeing this, you definitely have to feel like that will be the end result. I look to see him back come August.

Finally, we'll close with the latest on Kendall Kelly, who spent his third day at safety, were according to Chase Goodbread things are apparently working out well:

Nevertheless, despite that, I still find it interesting that Kelly is still wearing his old #81. That was confirmed today by the following photo from the Tuscaloosa News: 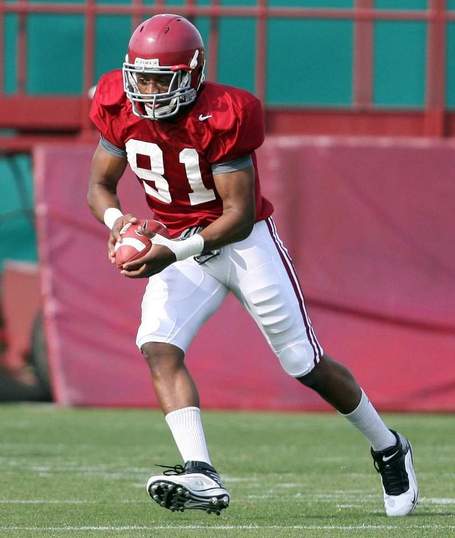 I still find that very odd. We've assigned numbers to all of the freshmen, and we've had other number changes among returning players, so why have Kelly wearing #81? You know he won't be wearing that number if he sticks at safety. Of course, though, I may be reading entirely too much into it, and if nothing else, the other signs seem to point towards this move sticking. We'll see what happens from here. I imagine that if Kelly is still at safety by this time next week, then we'll know the move is for good. Finally, one positive sign here... no braces, no tape-jobs, no added padding, etc. for Mr. Kelly. Always a refreshing sign when you are talking about a player who has been struggling to stay healthy.