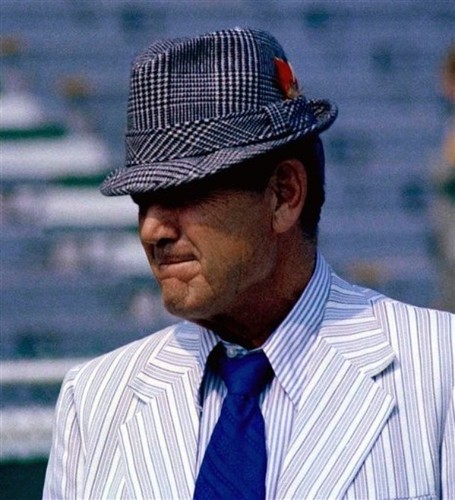 As long as they don't mess with 323 then nobody's gonna get hurt.

Last September, in the wake of the resounding victory over Virginia Tech in the season opener, I posted an item listing the win as the 800th in Crimson Tide football history. Turns out I jumped the gun a bit and Mr. Holiday had to come in and clear up the mess.

The confusion stemmed from the uncertainty of how to handle the victories between 2005 and 2007 that were subject to vacation by the NCAA. Earlier this week, the association illogically decided to uphold the Committee on Infractions ruling that Alabama must clear 21 football victories from the record books.

That puts the Crimson Tide's all time record at 792 wins, 316 losses and 43 ties. And now we can revisit the list of college football's all-time winningest programs with a bit more authority.

The numbers above are from the NCAA's 2008 overall statistics updated with the association's info on each team's subsequent seasons. Ideally, I'd prefer to link to a single authoritative source on the revised numbers but that's not available yet.

According to Mr. Holiday there are a likely a couple good reason for that. First off, Alabama must now send the NCAA a list of the games that will be vacated from the program's record before they are formally stricken from the association's rolls. Then, it's also possible that both UA and the NCAA must update all the individual player statistics for the games involved. Wonderful.

So what does all this mean? Alabama drops from sixth in the all-time win column to No. 7 and the all-time winning percentage total (.707) stands at No. 6. Is there any upshot? Why yes. It now seems the earliest we can hit the 800-win-mark (again) is on Oct. 23 in Neyland Stadium against the hated Vols. Now wouldn't that be nice?