Third Saturday in Blogtober is to blame this week, so away we go:

1. It's way early, but who do you think will replace Tim Tebow as Gary Danielson's man crush?

Cam Newton, obvs.  I mean, the kid was going to be the next Tebow at Florida before the whole laptop incident, and now that he's playing in Gus Malzahn's high school offense he's destined to be the greatest quarterback in the entire history of the game because Gus Malzahn's high school offense dominated our defense for 58 minutes last year if by dominate you mean generated its lowest number of offensive snaps in conference play all year long, managed only 6 first downs (also the same number of three and outs in the game!), turned the ball over twice, and didn't do jack shit for the final three quarters beyond connecting on a blown coverage for a cheap TD. Besides that he's already won a national title at the JUCO level, and did I mention he's playing in Malzahn's high school system? Clearly he'll be an unstoppable man beast worthy of Danielson's fanatical devotion.

2. Each season under McElwain (and Saban), the offense has added several wrinkles that largely transformed the offense. Last year, it was the addition of the Wild Elephant. What can we expect this fall?

I don't know (or think, really) that we'll necessarily be adding "wrinkles" this year, though I don't expect that the offense will look the same either.  The Pistol and the Wildcat were huge additions to the offensive toolbox last year, but I don't really know that we exploited them as much as we could have and wouldn't be surprised to see any new wrinkles this season coming within the two old wrinkles, particularly the Wildcat.  Remember, Ingram wasn't the only one running it last year. Upchurch was taking snaps in it when he was healthy (more than a few early on and at least one against Texas off the top of my head) and Trent Richardson also took a few snaps as well.  Even though we used it as a power run formation roughly 99% of the time, there's so much more we can do with it.  Exhibit A:

That's obviously not a specific play we'll be doing often (ran it only one other time, against LSU with Smelley playing the Julio role from TE but was alas a little overthrown and incomplete), but it serves to illustrate my point that the Wildcat package has plenty of potential to become a big part of the offense, be it Ingram/Richardson just barreling over tackle, splitting McElroy (or anyone else that can throw) out wide and pitching to him, having someone come on the sweep....man I want to see that thing exploited big time this year.

3. Of all the young players vying for playing time in the secondary, who do you think will take over for the departed Javier Arenas at the Star position?

That's a pretty tough question given we're still wondering who's going to take Javy's and Kareem's places at corner, much less who's going to be the #3.  Just gut reaction makes me think either Dre Kirkpatrick or DeMarcus Milliner will be there (I've already said I think BJ Scott and Phelon Jones have the inside track at CB), but who knows?

4. What is the #1 question about the team that you'd like to see answered this spring?

Who's going to be the #3 back (or the "Roy", as I like to think of it, spread the word and see if we can get that to catch on).  Ingram and Richardson are obviously going to be carrying the workload, but Upchurch just provided that extra something in the backfield the last two seasons that I think will be important to find again this year.  He was a great rusher in his own right, but he was also an excellent pass blocker, a serviceable lead blocker out of the I when lined up at fullback, and had great hands out of the backfield (attention NFL people who may need a 3rd down back...) and the way he took over the Tennessee game in '08 after Coffee went down and Ingram was struggling was just a sight to behold.  With Terry Grant hanging it up, Mike Marrow moved to H-Back/TE, and Jalston Fowler moving to defense right off the bat, you're down to Demetrius Goode, Jeramie Griffin, and Eddie Lacy as candidates.  Even though they all have something to recommend them (Goode's been around awhile and got a lot of garbage time carries last year, Griffin is a straight up bruiser, and Burton Burns described Lacy as a combination of Ingram and Richardson, which just sounds unfair), until they can get on the field and show it the "Roy" is still up in the air. 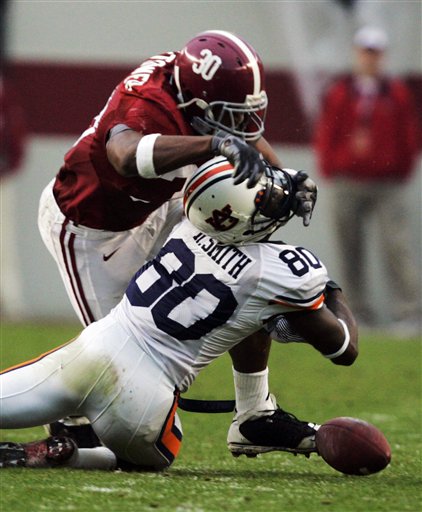