Top Moments of the 2009 Season: The Final Four - Rocky Block vs Cody 5

Share All sharing options for: Top Moments of the 2009 Season: The Final Four - Rocky Block vs Cody 5

It is with great regret that my personal favorite moment of the season, Marcell Dareus' TD to end the first half against Texas, was upset by Eryk Anders' forced fumble by a scant 32 votes. I'm not saying Anders' fumble didn't make me happy; when it happened I leapt from the couch screaming and the dog, who had been quietly snoozing on the couch next to me through most of the second half, also leaped to her feet and started barking because I have trained her right. But the big man TD? Its such a rare and precious gift to football that I really thought our own contribution would make it to the end. Oh well. Today we've got the dagger plays against our two biggest rivals so I imagine the vote will come down to who do you hate more, Tennessee or Auburn. Vote away: 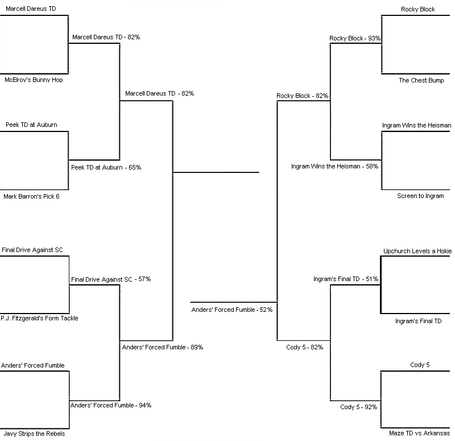