Stadiums I've Been To: Reliant Stadium

Share All sharing options for: Stadiums I've Been To: Reliant Stadium

I know past installments of this feature have focused solely on places I've been to watch college football games, but in the spirit of keeping with our attempts to diversify coverage here at RBR (basketball, softball, baseball, gymnastics, etc.), I figured I would expand this column to include venues I've seen other sports in as well. There's still plenty of places I've seen college football that I haven't included yet, so don't despair, I just figured I would mix things up a bit this time. With that in mind, I bring you my trip to... 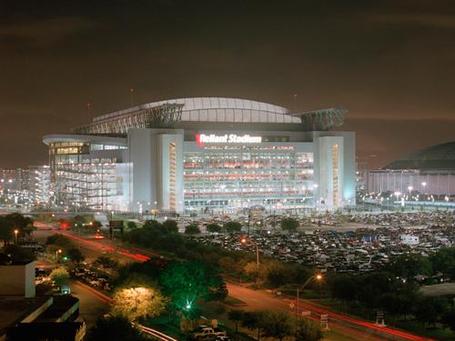 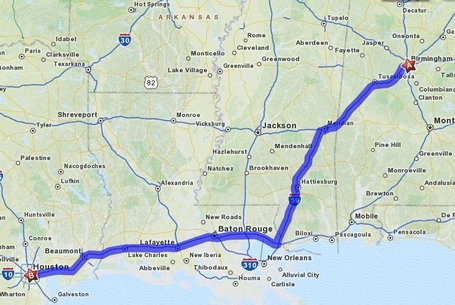 Like many trips I've taken, there was a healthy dose of ridiculousness in even getting to the city of Houston and into my hotel. I intended to break the drive up by spending the night in New Orleans but that didn't happen of course. Because of work, I didn't leave Birmingham until 10pm and figured I'd get to New Orleans sometime around 3 in the morning. Something ended up happening with my friend I was going to stay with and she couldn't accommodate me that evening because she had to leave town on short notice to attend to a sick family member or something similar. I didn't find this out of course, until I was somewhere in Mississippi. Rather than fork out a bunch of cash for a few hours' nap somewhere in Louisiana, I decided the thing to do would be just to plow on throughout the night to Houston.

I ended up pulling into Houston sometime during the 7:00 o'clock hour and enjoyed a healthy dose of heavy Houston rush hour traffic before finally making my way to my hotel around 8:30 or 9:00. Being the atom-splitter that I am sometimes, I didn't even consider the fact that I wouldn't be able to "early check-in" at my hotel well before noon. Not being able to get into my hotel until around 3pm or so, I find myself exhausted, hungry and aimlessly wandering around looking for somewhere to kill time. I found my way to Barnes & Noble where I perused books for an hour or so, but was eventually too tired to be able to function or construct coherent sentences so I went and slept in my car in the parking lot of the hotel I wasn't able to access yet.

After snoozing for a couple of hours I attempted to early check-in again and was told I could have a regular room but that the suite that was reserved for me (I knew someone that worked high up in that hotel chain...trust me, I can't afford suites) wouldn't be ready for another hour or two. I told the guy I didn't care if they checked me into a utility closet at that point, I just wanted somewhere air-conditioned that I could sleep. For those of that you have never been to Houston, it's probably the humidity capital of the world...or at least the United States. This was early May. I shudder to think what summertime there must be like.

I haven't been to the new stadium in Dallas, but at the time I went to this game, I imagine that Reliant was pretty much the envy of many other stadiums in the US. Retractable roof, good sight lines, construction that's more vertical than bowl style (so everyone is more on top of the action) and you have the recipe for an amazing facility. Despite the heat outside, they were able to keep it really cool in the stadium by not opening the roof until just before kickoff.

As far as seating for soccer goes, my seats kind of sucked in that I was directly behind one of the goals. That being said, the view was still incredible and made quite an impression: 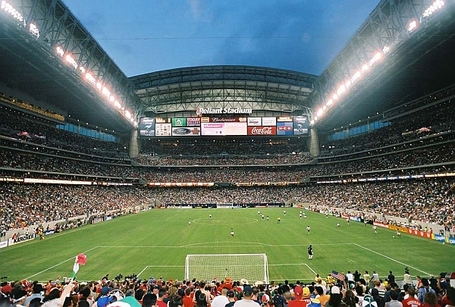 USA vs. Mexico is a seriously intense rivalry. Think of the Iron Bowl or the 3rd Saturday in October and add an international element to it and you've got one seriously high voltage game every time these two foes step on the field. At the time of this game, the USA was coming off of an impressive run to the quarterfinals in the World Cup in Japan and South Korea in 2002. To add insult to injury for Mexico, the United States eliminated Mexico from the World Cup with a resounding 2-0 win over our neighbors to the south in the city of Jeonju. Enjoy reliving those highlights here (well, except for the work of cheap shot artist Rafa Marquez):

This game fell during an impressive run where the US didn't lose to Mexico anywhere but in Mexico for nearly a decade. The States mounted an impressive 10-0-2 run outside of Mexico (outscoring them 21-3 in those games) during this time. This game was their first meeting since the World Cup in South Korea and the Mexicans were out for vengeance. The Mexican press billed the game as "La revancha en la cancha" or "revenge on the field."

In reality, it wound up being a bit of a sluggish affair with neither side mounting many legitimate scoring chances and ended up a scoreless tie. Despite the lackluster game, it was a fun trip as the sold out crowd was absolutely electric throughout the game. I hated that I ended up seeing one of the two ties during that glorious run, but hey, at least we didn't lose.