Share All sharing options for: It ain't over till it's over...

While most have probably removed the 2010 recruiting class to the trash heap of history, it would be wise to recall the words of Yogi Berra, and to that end it ain't over yet.

Seantrel Henderson, the nation's top prospect, has yet to sign a letter of intent. When he announced his decision on National Signing Day, he was careful to note that he had only verbally committed to USC, and had intentionally decided to forgo officially signing until after the Trojans went before the NCAA's Committee on Infractions. Now more than a month after Signing Day, Henderson remains unsigned, and given the continued concern of major sanctions for the Trojans, there seems to be a growing consensus that Henderson will ultimately flip and sign with either Ohio State or Miami. Verbal commitment notwithstanding, no one really has any firm grasp on just where he will end up.

And Henderson is not the only elite prospect left on the board, either. Latwan Anderson, another five-star prospect, remains unsigned as well. He verbally committed to West Virginia in early January at the US Army All-American Game, but continued to flirt with other schools and ultimately decided not to sign a letter of intent with on National Signing Day. More than a month later, he remains unsigned and continues to weigh his options at West Virginia, Miami, and USC.

Cases like Henderson and Anderson are by no means anomalies in the modern age of recruiting. While there have always been such instances in the recruiting world, the rate at which we see high-end prospects spurn schools that they had previously given their verbal commitment to is growing higher and higher. Just browsing prospects generally considered top 50 prospects in the 2010 recruiting class -- and notwithstanding either Henderson or Anderson -- I personally counted ten prospects who gave a verbal commitment to at least one school only to ultimately sign with another. 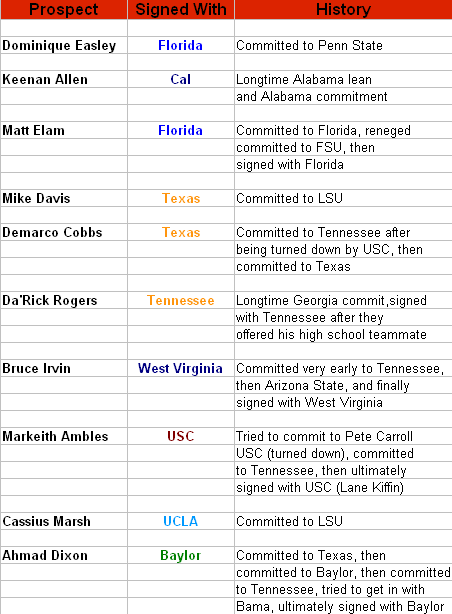 The individual stories behind the cases vary greatly. At least one involves possibly sinister activity by those surrounding the prospect (Keenan Allen). At least two of them were the likely result of package deals (Allen and Da'Rick Rogers). Some involve players who probably just finally got that long-awaited offer from the school they had really pined for all along (Demarco Cobbs, Dominique Easley, and Markeith Ambles). Others involve players who were turned away by their teams' struggles (Mike Davis), while others perhaps just ultimately couldn't go through with packing up and moving 2,000 miles away (Cassius Marsh). A few behaved like they possessed ten cent heads (Ahmad Dixon and Matt Elam).

In any event, regardless of the specifics behind each individual decision, the point remains that with each and every prospect, every single one of them at some point verbally committed to a school, said all of the glowing things about that particular school, sported their garb everywhere they went, recruited others... only to say to hell with it all and sign somewhere else at the drop of a hat.

Furthermore, this is a phenomena that has not been isolated to the ultra-elite prospects either. Alabama fans should know that well after the 2010 recruiting season. Keenan Allen notwithstanding, two other plays reneged on verbal commitments with the Tide to sign with hated rivals -- Craig Sanders and JuWuan James, the former on concerns over playing time after the commitment of Alfy Hill, and the latter of concerns with possible future NCAA sanctions -- which is to say nothing of a third (Blake Sims) who briefly de-committed in early January (days after the Tide won a national championship, mind you). Nor is it to say anything of the endless rumors that we heard involving the aforementioned Alfy Hill, Corey Grant, and others, and frankly if we broke this discussion down into this whole "Team X is my big leader right now" bit, this piece would take days to finish.

Truth be told, Chris Rock probably had it right ten years ago. He wasn't exactly talking about recruiting, but the point applies nevertheless:

A man is basically as faithful as his options. That's how faithful a man is, no more, no less.

The truth of the matter is that verbal commitments are meaningless. They always have been, of course, in the sense that they are not legally binding on either school or prospect, but in this day and age they are more meaningless than ever, as both schools and prospects continue to shop for the best deal until the last minute of the last day. As a general rule of thumb, until there is a binding relationship in place, the entirely ordeal is largely just a bunch of hot air.