Share All sharing options for: More on Malcolm Faciane 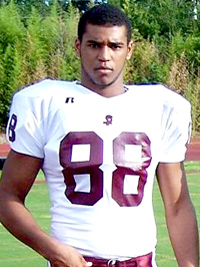 As we linked earlier in the day, Malcolm Faciane became the sixth commitment of the 2011 recruiting class when he gave his verbal commitment to Nick Saban and company this morning. A bit more info on Faciane...

A product of Picayune, Mississippi, Faciane is a very big kid coming in at approximately 6'6 and 265 pounds, and after just turning 17 yesterday (literally), Faciane may grow even bigger. Just prior to the start of his junior season some eight months ago, he was "only" about 6'4 and 220 pounds, but he has shot up a couple of inches the past few months and added another 40 pounds. If he stops growing, he'll report to Tuscaloosa almost an exact physical replica of what Michael Williams reported at three years earlier.

At this point in his career, Faciane is a big, physical guy who excels at run blocking. Picayune High has a run-heavy offense and rarely throws the football. As a result Faciane only had seven catches a year ago -- though he did average over 20 yards per catch when they did get it to him -- and at this stage he is pretty raw as a pure receiver. Supposedly Picayune will be getting the ball to him more often this Fall, but admittedly that's the standard line with pretty much every recruit in the country.

For Alabama, Faciane really stood out to Alabama in early February. It was then that he ran a blistering 4.61 at a Nike combine, and the Alabama offer quickly followed. I imagine that our staff took one look at him and realized that he was the size of Michael Williams and could run a legitimate 4.6, and after that the decision to offer him became a no-brainer. As is often the case with many recruits, we were on him earlier than everyone else, but offers from all three major programs in the state of Mississippi quickly followed. Again, it's not surprising to see what they saw in him... big, athletic kids are hot commodities, period.

And speaking of that combination of size and athleticism, it is that which makes Faciane a highly versatile prospect. He is being recruited as a tight end right now, but with his size and athleticism any number of positions is feasible. If he continues to grow and bulks up some more, he could easily turn into an offensive tackle. Or, conversely, we could just as easily put him at defensive end, and with his size we could probably even move him inside on the defensive line with occasion. Saban has a well-known reputation for loving versatile prospects, and Faciane definitely fits into that group.

Making matters better, Faciane is also a standout student in the classroom. Meeting the academic standards for admission won't be any issue for him, and furthermore he already sports offers from both Vanderbilt and Stanford. Again, it's easy to see what our coaching staff saw in him... a big, physical, athletic kid who was also a standout in the classroom, what is there not to love?

The only possible concern I have with Faciane is LSU. He has mentioned the Bayou Bengals quite a bit and he has held them in pretty high regard. He does not have an offer from them at the moment, though apparently they are recruiting him, and I imagine if LSU really goes after him (which is probably a when, not an if), we may have a bit of a fight on our hands. For now, though, bother me tomorrow, and just enjoy another strong addition to another strong recruiting class. Roll Tide, Malcolm.