Share All sharing options for: The A-Day Game Open Thread 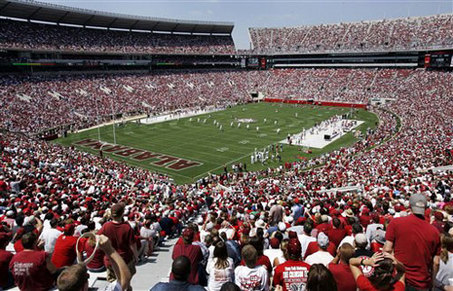 For all of those who cannot make it to the A-Day game today, myself included, chime in here with all of your thoughts on the action in the live game thread. I'll be participating throughout the day and I'll have a lot more up on the A-Day game later today once everything is wrapped up. Roll Tide, and hope for the best.

Recruiting Update: HUGE recruiting news already from A-Day... Hasean Clinton-Dix has committed to Alabama. I'll have more up on this one later, but this is a huge coup for us. The Florida native is rated by Scout.com as a five-star prospect and the #1 safety prospect in the country. You don't get much bigger commitments than this.

Recruiting Update II: Another HUGE commitment coming out of today, as LaMichael Fanning has committed to Alabama. The Georgia native transferred to Auburn high school last year, and Alabama snagged him over offers from pretty much every school in the country. He's going to be a high four-star at absolute worst, and with a 6'7 frame he is the perfect fit for a defensive lineman in a 3-4 scheme. As with Clinton-Dix, I'll have more on him later today. It's hard to understate this one... this is the best recruiting day we've had in ages, and the 2011 class is starting look nothing short of elite.