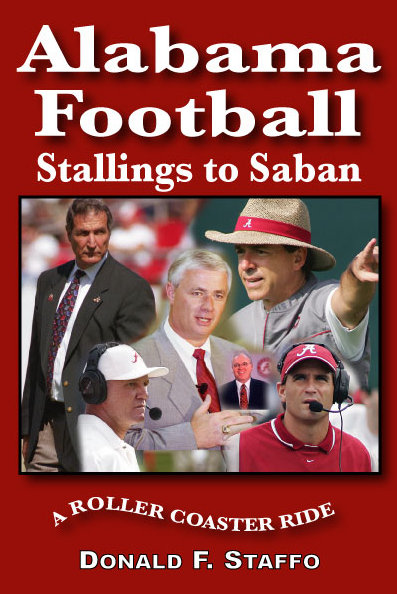 Donald Staffo's first book on Crimson Tide football was published in 1992 and the team immediately won the National Championship. The follow up, Alabama Football: Stallings To Saban, A Roller Coaster Ride, was published last year and Alabama proceeded to bring the crystal football back to The Capstone.

We're desperately hoping he is putting the finishing touches on a new one right now.

The first book, Bama After Bear: Turmoil and Tranquility in Tuscaloosa, covered the slow slide into mediocrity in the wake of Coach Paul W. Bryant's stepping down (and passing) that was finally resolved with the the arrival of Gene Stallings. The new book starts with Coach Stalling's triumphant 1992 title run and then it all goes downhill from there.

Problems started almost immediately after the 1993 Sugar Bowl with a player on the team signing with an agent in a Bourbon Street bar. That would be the start of a host of problems with the NCAA that would culminate in the forfeiture of all the wins from 1993 and draconian sanctions against the program.

The disarray would eventually result in Coach Stalling's departure in 1997 and usher in an era of upheaval that somehow seemed to get worse every time you thought it might be getting better. The sordid tale of Mike Dubose, Dennis Franchione and Mike Price has already been told with expertise on the pages of this website so there's no need to hash it out again.

Like his prior work, Staffo's style is sometimes a pretty hard slog and not just due to the distasteful subject matter. He loves the direct quote and the book sometimes reads like minutes to a board meeting. A better copy editor would have been nice too. 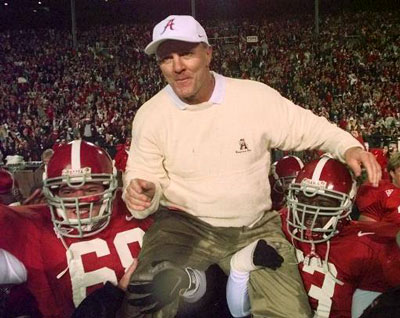 Mike Dubose. Because there's no way in hell I'm posting a picture of Franchione on this website.

A lot of the book relies on the input from people who write about the program rather than from those within the program itself. This doesn't necessarily call the veracity of the undertaking into question but it certainly robs it of it's immediacy.

What Staffo brings to the tale once again is a degree of perspective beyond the confines of the football team itself. Bama after Bear demonstrated quite clearly how Coach Bryant's passing left a power vacuum between the football program, the athletic department and the university administration. Until that was resolved, it was impossible for the program to move forward.

The pressures of the NCAA penalties led to a similar level of uncertainty between those three axes of power and the result was virtually the same. The resolution to the matter seems to have come with the arrival of Dr. Robert Witt as president of the university. He acted decisively on the Price debacle, brought in Mike Shula, a solid if unspectacular coach, to calm the situation and then let the athletic director do his job without direct interference.

The result was the hiring of Coach Saban and the assurance that he would be given complete control over his domain without interference from above. The result was success on the scale that once was simply expected of the football program. The hope now is that it can continue for some time to come.