Share All sharing options for: Crimson and White Roundtable: "Who Let Tower of Bammer Host?!" Edition

The loveable ne'er do wells over at Tower of Bammer drew hosting duties this week and, surprisingly, there wasn't a single dirty word to be found in their five questions.  They're slipping, apparently, and I for one am ashamed and disappointed to be associated with them in any way shape or form.*  With that being said, my responses:

1. While the actual players and coaches deserve some of the credit for last season's success, it was our collective superstitions and dark rituals that brought home the championship. What was your superstitious contribution?

I've been wearing the same inappropriate, scandalously tight lucky game day shirt for awhile now.  This is what it looks like: 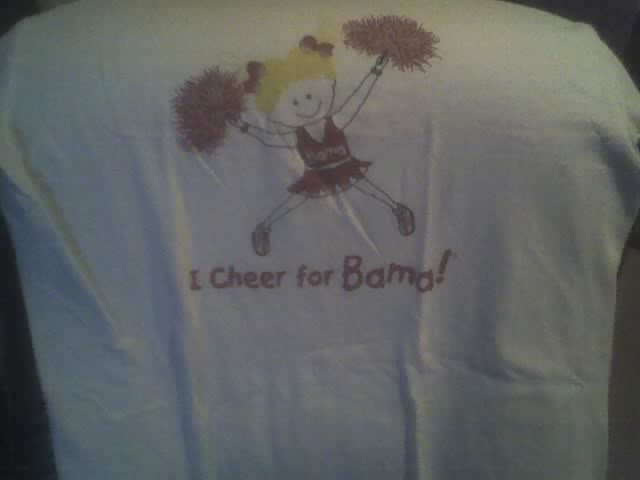 Luckily for all those around me I wear it underneath a different Alabama shirt.  In '08 I wore the same one every game, but last year I started wearing a different every week and that worked out pretty well, so I'll continue rotating the over-shirt this year.

2. Put on your Finebaum hat, dip your arrows in vile poison, and tell us which SEC coach is gonna be the first to get canned/and or bolt for greener pastures... like golf courses.

That's kind of tough, actually.  As for being fired, the two likeliest candidates are Les Miles and Mark Richt.  Both have seen seriously diminishing returns on there so far excellent recruiting, but when Richt shook up his staff it bought him at least another couple of years (on top of the "nice guy" capital that is good for at least one more sub par year), and the LSU people seem to be okay with Miles so long as they are hitting 9 wins and making New Year's Day bowls.  How much longer that lasts is up for debate, but unless he just royally screws up this year and LSU tanks completely (which they probably won't) I don't think he's getting the axe after the 2010 season.

The two most likely scenarios involving coaching departures from the SEC are Steve Spurrier retiring and Urban Meyer stepping down "for reals this time" if his health really starts taking a turn for the worst.  Spurrier retiring is the more likelier of the two; South Carolina is a sinkhole, and

3. We would love for this to go on forever, but let's face it, we have to lose a game at some point, right? What team on next years schedule (pronounced shed-jewel) should cause the most concern?

Shed -jewel? SHED-JEWEL? I'm sorry, did we get magically transported to Britland and I didn't notice?  Are you gonna start calling elevators "lifts" and stop brushing your teeth now?!  Maybe its dark outside and you need a "torch" to see which wrong side of the road you're driving on instead of a flashlight.  $#%*ing commies...

4. Joe Paterno has already screeched "You can't count on freshmen. Do you want to go down to Tuscaloosa with freshmen!?" but Penn State fans are buzzing about how true frosh Paul Jones looked in their spring game. Is JoePa playing it smart, clinging to an outdated case of freshmanastartaphobia, or just planning on starting a sacrificial lamb QB so Marcel Dareus doesn't eat his good ones?

A few years back when Penn State was in the crapper and everyone was calling for JoePa to step down, he did the unthinkable (at least for him): gave up on an outdated notion of "seniority" and loyalty to upperclassmen over more talented youngsters.  That's worked out pretty well for him so far, and I imagine that, whether he really wants to throw a freshman to the wolves that early or not, if he thinks he gives them the best chance at winning he'll do it.

5. Everyone I know has a crazy story about dealing with an out of control swamp-thing rival from Red Stick, whats the craziest thing you've ever seen an LSU fan do? (Just to make things interesting, lets disqualify Shaquille O'Neal's performance as a genie in Shazam)

I'll see your Shazam and raise you a Steel, which I have seen, and it is glorious:

On a more realistic note, I've never had any really crazy run ins with LSU fans, but I did have an amusing encounter last summer. The Dog has a charming habit of dropping surprise poops if we are out walking and there are a lot of people around, no matter if she already pooped two minutes beforehand with no one looking.  Even more amusing she looks around at me and everyone else with a smug look of satisfaction like "yeah, I'm a cute little dog, and I'm dropping poop wherever I want, because I'm a cute little dog and I can get away with it. Jealous?"  Anyway, I live close to Homewood Park and on this particular Saturday they were having some event (chili cook off or something like that) that was drawing a lot of people.  So as we're walking by on the sidewalk I feel a tug on the leash and look back to see her plopping a pile right in the middle of the sidewalk as families with their small children go strolling by.  It was embarrassing, no two ways about it, but as I'm standing there trying to act cool all of a sudden I hear "HEY! LOOKA AT LIL DAWG POOPIN'!" and turn around to see a guy in an LSU hat ribbing the woman next to him and pointing.  What made it even more funny was that he and his lady friend looked like your typical Homewood yuppies (dock shoes and sundresses), but the coonass flavor coming out of his mouth was pure gold.

* Not at all true. They crack me up and I had a great time meeting and talking to TJ at Egan's on A Day.