RBR at the Movies: THE DAMNED UNITED

Share All sharing options for: RBR at the Movies: THE DAMNED UNITED 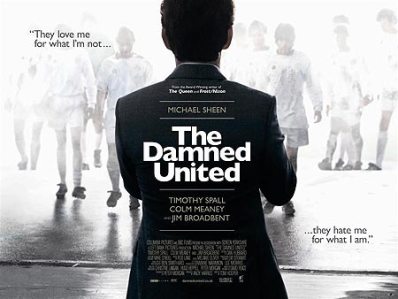 Brian Clough, the subject of The Damned United isn't a personality likely to be familiar to many readers of this site. That being said, the esteemed English soccer manager shares a lot in common with a couple of our favorite coaches. He had the ability to take a small club like Derby County and turn them into champions similar to the way Bear Bryant was able to take an historically unremarkable Kentucky Wildcats team and inspire them to greatness and earning their first SEC crown. Much like our current boss Nick Saban, Clough gave no quarter to the press. He had a wicked sense of humor and would speak his mind unfailingly at press conferences and on television appearances.

Additionally, he was a veritable quote machine and rather adept at self-promotion:

"I wouldn't say I am the best manager in the business. But I am in the top one."

Clough's self-assured nature even earned him a "jab" from Muhammad Ali one time:

Despite his great success as a player and a manager, Clough did have a rough patch or two in his career. The Damned United primarily focuses on his disastrous 44 day stretch in charge of Leeds United and on his adversarial relationship with the Leeds manager that preceded him, Don Revie.

Clough takes over for Revie at Leeds after Revie is given the job managing the English national team. Many were surprised that Clough took the job at Leeds given the way he frequently criticized the squad and Revie for dirty play. Clough had been managing Derby County, a team he'd brought up from the dregs of 2nd Division English soccer to be a championship caliber 1st Division team, but was fired after a disagreement with the club chairman and board of directors. To put it bluntly, Clough's mouth wrote a check his ass couldn't cash and he found himself out of a job and in the odd position of being offered the manager's job of his and Derby's arch-rival. At that time, Leeds were the greatest club in England, so Clough jumped at the job opportunity. It wound up being a total disaster.

Clough alienated many of Leeds' star players by his critique of their play and their former boss Don Revie. Clough was reported to have said to the Leeds team on his first day on the job:

"You can throw all your medals in the [trash] bin because they weren't won fairly."

Needless to say, that didn't exactly endear him to his new squad. Despite his stellar career as a coach, his personality clashes at Leeds with both players and executives found him fired after just one win in his first six games (which is kind of like Mike Price, though Price never coached a game), which at the time, was the worst start of to a Leeds season in twenty years.

I know a lot of folks around here aren't too keen on soccer, but I don't think you'd have to love (or even like soccer) to enjoy the film. As Alabama fans, I think we can appreciate the coaching acumen of a genius regardless of the sport. As Philip Martin of the Arkansas Democrat-Gazette put it, this is "...nothing like a conventional sports bio-pic; it's a character study of a difficult personality, a charming, enigmatic victim of self-sabotage." Unfortunately, hagiography is all too common when it comes to sports biopics and its really the Achilles' Heel of the genre in my opinion. That's where the appeal of The Damned United is for me: it's a good movie that portrays a beloved person with all of their qualities and faults and glories and failures. 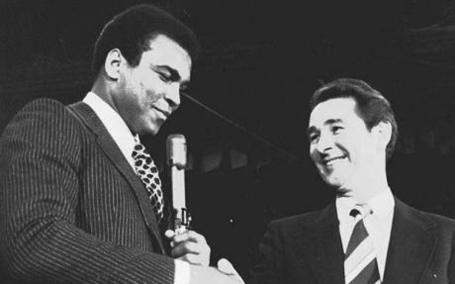 Muhammad Ali and Brian Clough enjoying a laugh together