Share All sharing options for: The Crimson and White Roundtable: Capstone Report's Turn

The Capstone Report ponied up with the questions this week, so away we go:

1. Is Alabama on the verge of a quarterback controversy? The backup quarterback is always a fan favorite, but A.J. McCarron posted good stats from the first spring scrimmage. What are the chances he some significant playing time in 2010? Would that be good or bad?

I doubt there could even be a true QB controversy between McElroy and McCarron at this point. Say what you will about McElroy during the middle of last season, he has an SEC ring, a National Title ring, and hasn't lost a game in like 43 years so I sincerely doubt there is a single person* out there thinking to himself "if we'd ditch that damn McElroy kid we might really have something next season." Once the season starts, though, all bets are off, especially if McElroy has any struggles resembling his mid-season slump from last year.  If that happens, don't think he won't get pulled for McCarron if the coaches think he gives the team the best shot at winning.

And even though this isn't really what they had in mind with "QB Controversy" I tend to think that at some point, should Star Jackson stick it out in Tuscaloosa, there could very well be a growing controversy surrounding why he isn't getting on the field. We've said over and over again on this blog and in Yea Alabama that Jackson isn't a "running QB," he's a pocket passer that's also a good athlete, but considering the thought "why don't we let Jackson run the Wildcat?" has popped into my head a few times I know it's had to have occurred to someone else. With McElroy entrenched and McCarron seemingly the next great 'Bama QB (and Phillip Sims right there behind him), if Jackson is going to stay at Alabama and a) really wants to get on the field and b) has proven to the coaches that he deserves a shot at being a part of the offense, then running the Wildcat/option may be the only way it's going to happen.

2. Were there any other bits of good or bad news from the scrimmage that fans should consider?

Who is John Baites?! Apparently he caught a 5 yard pass from McCarron during the scrimmage for a TD, yet he isn't listed on the roster. I'm sure he's probably a walk on (who knows what grouping or situational drill McCarron was working with at the time) that just isn't listed on the official roster, but at the same time I'd like to imagine he's some super secret special weapon Joe Pendry built in his garage during spring break and his score was intentionally leaked to the press in order to.....do something. One can never know the complex workings of a mind like Joe Pendry, obvs, but rest assured John Baites is safely secured beneath Bryant Denny, waiting, charging, ready. 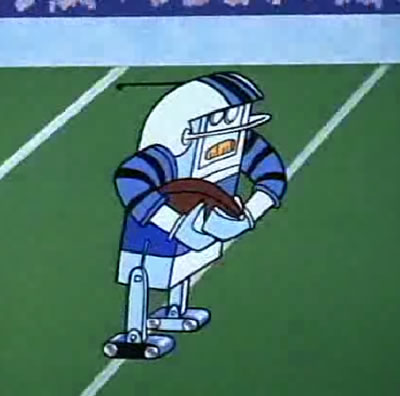 Artist's rendering of the terror that is John Baites.

3. Homecoming is October 16 against Ole Miss. Thoughts? Is it ever good to play an SEC squad for homecoming?

Considering the last time we played Ole Miss for homecoming was 1988 and we lost 22-12, maybe it isn't good hoodoo to name the Rebels as homecoming again.  On the other hand, the only sideline Bill Curry will be walking in Tuscaloosa this time around is the visitor's so maybe it ain't so bad.  Besides, SC was homecoming last year and even though the offense struggled mightily, it worked out pretty well for Ingram.

Maybe having an SEC team for homecoming this year means Trent Richardson will bring home a Heisman...

4. What does the Menzie injury do to Alabama’s projected depth in the secondary?

Well, it obviously hurts depth at a position of need, though not sure how it affects "quality" depth.  BJ Scott, Dre Kirkpatrick, and Phelon Jones all have a year in the system at DB and I find it hard to believe Menzie was going to come in and get the start from day one.  On the other hand, we don't recruit JUCO kids lightly and I imagine he was probably going to be expected to at least contribute in nickel and dime packages, so not really having the fresh bodies to rotate in game (or, God forbid, should we run into some bad injury luck) like we did last season could prove harmful.  I guess we'll really just have to wait and see how well Milliner and Fulton do in spring and fall to really know what whether or not having Menzie healthy would have been huge or not.

5. Happy that Duke won the tournament? Happy the basketball season is finally over?

I know a lot of people hate Duke; watching the end of the game the other night The Girl commented that she wanted Butler to win because she's so sick of hearing about Duke, just like she gets so sick of hearing about Alabama (she went to Ole Miss), and all I could say was "that's loser talk."  People can talk all they want about how they hate Duke and North Carolina and Kentucky (or, in our case, Alabama football) for phoney baloney reasons like "the refs give them all the calls, their fans are jerks, blah blah blah", but when it comes down to it the reason they're hated is because they win, and they win a lot, and odds are that whoever your team is has repeatedly been on the losing end of their success.  So even though I was sort of pulling for Butler (everyone loves and underdog, so long as they aren't playing your team), Duke winning didn't bother me one bit.

* there are undoubtedly people thinking this exact thing on an al.com message board right now, but we don't like to consider them "people."