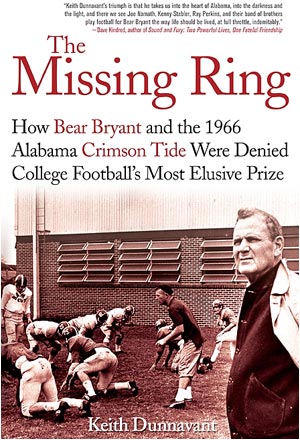 Among the more common stereotypes foes of Alabama football employ against the Crimson Tide partisans centers on the 13 National Championships the university claims. Given the capricious manner by which the title has been awarded over the history of the sport, a certain amount of debate would seem to be inevitable.

Yet the matter is very straight forward in the minds of Alabama fans; we don't particularly care what the naysayers think because we remember what happened in 1966. The title of Keith Dunnavant's 2006 book says it all: The Missing Ring: How Bear Bryant and the 1966 Alabama Crimson Tide Were Denied College Football's Most Elusive Prize.

Alabama was awarded the national championship in 1964 and 1965 and were chasing an unprecedented third title in 1966. They were the pre-season No. 1 team, they were undefeated and untied in the regular season and they completely blew out the highly ranked Nebraska Cornhuskers in the 1967 Sugar Bowl.

Instead, Notre Dame, a team that not only had a tie on its record but settled for that outcome rather than playing to win, was crowned champions. Clearly something much more than what is apparent on the playing field was afoot and Dunnavant's book sets out to understand exactly what.

Dunnavant's book is one of the best about Crimson Tide football. He demonstrates a deft touch with the narrative showing a distinctive flair without succumbing to the sins of sentimentality. In the concluding chapters of The Missing Ring he lets his allegiances come to the surface but not at the expense of the overall work itself.

I think this is partially due to the specific scope he allows himself in The Missing Ring. By focusing on one season the abundance of material about the program and it's larger than life coach can be cast as background. Instead of a mountain of anecdotes and data you have a better understanding of the immediate drama of each phase of the season and how it slowly developed and reaches its bittersweet conclusion.

The Missing Ring deftly sketches the background of the Crimson Tide program, the legendary head coach, Paul W. Bryant, and the main players who were involved in the 1966 campaign. If there's a villain here it's Notre Dame head coach, Ara Parseghian, who decided to play for a tie in the match with Michigan State setting the stage for the controversy that followed.

Parseghian's decision was far too cynical a gambit in the mind of Alabama fans who were still staunch idealists when it came to their view of football.

"When you're the champ, you don't go for a tie," Coach Bryant once said. "You're out there to win."

The Missing Ring would be simply another Alabama hagiography if Dunnavant left it at that and, thankfully, he doesn't. A odious as Parseghian's decision was, it didn't represent the heart of the problem. Pollsters had too cast their votes and there was more at work on their decisions than just the outcome of football games.

The 1966 squad was playing on the edge of an era. It was one of the last great teams of one-platoon football playing in the days before television and the pro game dominated the national consciousness. "For most fans in 1966," Dunnavant writes. "Football existed much more in the mind than in the eye."

But that perception was inexorably being caught up with the vast social turmoil in the country. The opposition to the war in Vietnam was feeding the burgeoning counter-culture movement and both becoming mainstream issues. Even more pressing was the civil rights struggle that had enveloped the south for more than a decade.

Southerners might have felt these issues were neatly compartmentalized but by the mid-1960s it was increasingly apparent they were not.

One of the key points Dunnavant makes is that while the Crimson Tide football program was emblematic of everything Alabama held dear - it also represented the more distasteful aspects of their society. Segregation was a fact of life through the mid-1960s in the South and the football team in Tuscaloosa was a very visible reminder of that fact.

Even as Bryant and his coaches and players worked long hours to build a powerful football program that their state could be proud of, they were engaged in a contentious struggle for the meaning of Alabama in the nation's eyes. Was Alabama about excellence in football? Or bigotry?

The answer to that question isn't nearly as clear cut as either side tried to make it and The Missing Ring is important in laying out the many conflicting details of the situation that are often overlooked due to the mythology that Alabama football tends to attract and the stereotypical shorthand we too often let pass for our understanding of history.

The Missing Ring succeeds because, instead of trying to assign blame for what happened in 1966, Dunnavant attempts to show how the tragedy of the season underscored more profound truths about the era and the country as a whole.

In an ironic twist, by denying this clearly deserving team the national championship, the 1966 team has become one of the best remembered in the history of Alabama football. The sustained excellence of Coach Bryant's teams sometimes means the various squads become muddled and confused with each other - but no-one ever forgets Ken Stabler, Ray Perkins and the boys of '66.

Because no team in the history of college football ever had a greater claim on the national championship than that squad that year and the powers-that-be decided it wasn't to be and that's the way it is.

But act all shocked when we turn around and insist our rightful claim on the titles from other years.