Crimson and White Roundtable: "I Used to be Good at Coming Up With Clever Titles, I Swear" Edition

Share All sharing options for: Crimson and White Roundtable: "I Used to be Good at Coming Up With Clever Titles, I Swear" Edition

3SIB is back on the hosting duties, so without further ado:

1. Whenever a media outlet evaluates the Tide heading into the fall, the first three questions are always 'how will the Tide replace Terrence Cody?', 'will the secondary be a weakness?', and 'what sort of liability will special teams be?' After these three obvious questions, is there another area not being discussed that could be problematic this fall?

Well, those three questions are always asked because they really and truly are the "only" tangible - at least on paper - concerns facing the Tide this season.  Wide receiver?  Stocked.  Running back?  Sux for y'all LULZ.  Offensive line?  3 of 5 back and without the seemingly uphill climb that the '09 group faced and conquered.  Rebulding defense?  Loaded with guys up front who have seen plenty of quality playing time and everyone else is practically pooping Rivals points.  The only areas not really being discussed by anyone but Saban and the team are the intangibles, namely motivation and being tough enough mentally to handle adversity.  There's been plenty of talk about how hard it is to repeat for those exact reasons, and even though I believe that Saban and his staff are the kind of coaches that can keep a team motivated and focused in the warm afterglow of a national title, I've also seen how hard it is to keep a team motivated and focused while in the hunt for a national title and at some point the team is going to come out flat.  Its just going to happen, and as well prepared as the coaches are and as great of a game plan as they may have put together, this isn't NCAA 10 where they are controlling the players on the field.  We'll just have to get on our knees and pray to the football gods each and every Saturday morning that if the team comes out flat that whatever calamity occurs from it is early enough to get their heads back on straight and finish.

2. Every season since Coach Saban showed up on campus, at least two true freshman have distinguished themselves either as starters or as standout contributors on offense or defense. In 2007, it was Rolando McClain and Kareem Jackson, followed by Julio Jones and Donta Hightower in 2008, and last year it was Trent Richardson and (arguably) Nico Johnson. Who do you see being an immediate asset for the class of 2010?

I think we're safely to the point where we won't have any true freshmen making a big impact like Jones, McClain, et all because we're finely to a point where we don't need a true freshman to step up at a critical position on the field.  That's not to say that it won't happen - DeMarcus Milliner or John Fulton enrolling early wasn't just important because we really wanted them to play on A Day - but I would be really surprised if one was able to get enough quality playing time on offense or defense to blow up like any of the above mentioned did right away.

With that said, special teams is still an area where we need help and an area where a true freshman could make a name for himself and get ahead of the line for a starting spot later on.  I would be very surprised if it was as a return specialist, though; we need someone who has proven they can field kicks cleanly and not put the ball on the ground more than we need someone who is a "weapon" right now, and a true freshman might not be able to handle that right off.  But looking at how Dre Kirkpatrick stood out as a gunner last year, and how Courtney Upshaw was such a force in kick coverage the year before, that avenue is definitely open. And that's not mentioning that we are essentially forced to rely on true freshmen at punter and place kicker, which we won't mention, because it makes us horribly sad. 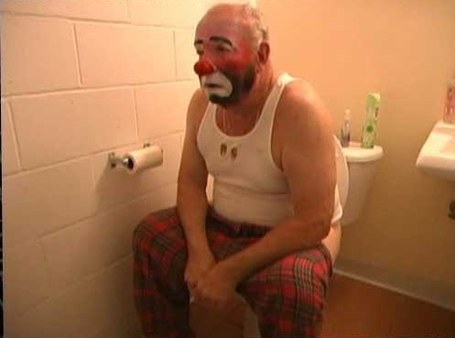 And believe me, you don't want to see us horribly sad.

3. We're all hopeful that Alabama goes undefeated for the third consecutive regular season, but 'unlikely' doesn't begin to describe the difficulty of that. If Alabama is going to lose at least one game, the question is not which is most likely, but which loss could you stomach the easiest?

Stomach a loss?  Y'all might as well just be a full time Tennessee blog...

4. Lots of people are pointing to the Georgia State game as the functional equivalent of a bye week. Agree or disagree?

Disagree strongly.  Chattanooga was supposed to be a "functional equivalent" to a bye week last season, but when it all boils down it was still a game that had to be prepared for.  Yes, Alabama was more than likely peeking ahead at Auburn during those preparations, but while the War Biebers were enjoying an off weekend our boys were still going through the motions of preparing for a game.  A bye week schedule and a game week schedule are two completely different animals, and on top of that we're looking at a weird week with Thanksgiving and a game on Friday to throw even more monkey wrenches into the works.  And even beyond that, you're still talking about a football game.  People get tackled in football games, and people get hurt in football games.  Maybe not horrible career ending injuries, but still the kinds of bumps and bruises and aches and pains that can affect performance a week later, a la Roy Upchruch and Julio Jones being limited for a large portion of the '09 season after minor injuries against Florida International. There is risk in playing anyone, while there is no risk in sitting on your butt at home watching everyone else play.*  So even though we could start the second team against Ga. State and still probably drop 100 on them, it's not a bye week.

5. We've been talking about hypothetical expansion for weeks now and the consensus is that the SEC will expand if it feels so compelled by the moves of other conferences. For a few days a specious rumor has been circulating on MSM sources that the Big Ten has extended invitations to Nebraska, Missouri, Notre Dame, and Rutgers (one version includes Syracuse). If this group of invites were true, would this be enough to cause the SEC to attempt expansion? Why or why not?

I really just don't see how the SEC could feel like it needed to expand just to keep up with the Big Ten, and that's not some (well earned) smug sense of conference superiority talking, it's just basic economics.  The Big Ten is keen on adding television markets?  The SEC already has the richest best TV deal in the country.  (ed.- per Kenny in the comments, the SEC's TV deal is not the richest in the country, but I still maintain that it is the best TV deal in the country.  Either way, excellent points and huzzahs to you.) The Big Ten wants more teams to split into divisions and add a conference championship game to keep the conference relevant into November?  SEC was light years ahead of everyone else on that.  I just really don't see the economics working out.

* yes, yes, a power surge could cause the TV to explode or something, but you know what I mean.