Share All sharing options for: Oakland Raiders Fans Are Learning to Love Rolando

You might remember a few weeks back we had a visit from one of the guys over at Silver & Black Pride, the SB Nation blog covering the Oakland Raiders. He was asking for our input about the pride of the Crimson Tide's 2009 defense, Rolando McClain, and we made sure he knew exactly what we thought about the Butkus Award-winning linebacker.

Well, turns out they visited all the sites covering the colleges of their 2010 draft picks. And last week they did a roundup post about  the responses. Needless to say, they were a bit awed (in a colorfully NSFW way) by Alabama football fans' admiration for Ro.

That, in turn, got picked up by one of the Oakland Raiders forum and we've been getting hundreds of visits each day since from these guys. And they aren't the only ones who have been vocal about their excitement over No. 55.

The best part has to be the comments. Its kind of a reverse meltdown with extra awesome. I might have doubts about the Raiders ability to develop Ro into the Hall of Fame player he can be, but I don't harbor any reservations that this fanbase is going to give him the respect and admiration he deserves.

man those 'bama fans have me pumped about McClain all over again. i'm seriously tempted to buy a McClain jersey right now, and I haven't bought a jersey in years.

i'am 44 and been a Raider/Bama fan since I was 7. But when Raiders went to L.A and were never the same. I kinda lost interest. But now, with Mcclain, I can see the light. Oakland is coming back, lead by an awesome, mean-ass defense. Just like the good days of Madden. INTIMIDATING, RUTHLESS.

I just saw another interview with McClain and I really like his CRAZY LINEBACKER EYES!!! Call me simple but sometimes it's in the eyes!

I said I wanted McClain and that just furthered my hype about this man in the middle have them ready come sunday McCLAIN!

I want to make a romance explosion.

Rolando McClain is a fiery leader. Something that this team has needed badly for years. The more and more I read & hear anything about McClain, the more I fall in love with us drafting him in the 1st round.

If he is half of the guy that they are saying I will be stoked.

And, if we needed more evidence of how much these guys love Rolando already, at least one guy has taken one of those cheesy Alabama player wallpapers, added Raiders insignia to it, and is using it as his signature. Beautiful. 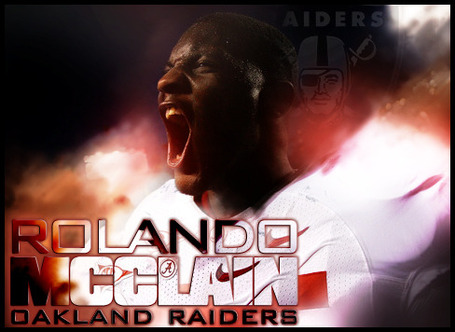