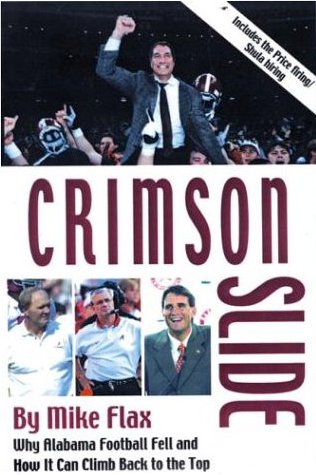 A few weeks ago I read one of the best books about Alabama football ever penned and, as if to even the karmic scales, the next one I had the chance to peruse was one of the worst.

The premise of Mike Flax's 2003 book, Crimson Slide: Why Alabama Football Fell and How It Can Climb Back On Top is certainly enticing: an Alabama practice squad player between 1997 and 1999 appeals to his buddies on those teams and pens an insider account of the turmoil that beset the program during that era.

Instead, what you get is more of a whiny rant from a few players who act like they had to run wind sprints a few too many times and decided they were going get back at the coach responsible.

Rather than any kind of insider account, Flax clearly despised former head coach Mike Dubose and Crimson Slide is the product of that. That it's his first book and suffers in terms of its composition certainly doesn't help matters much either.

A total of  ten former players are on the record in the book and almost all of those are simply providing general comments. The bulk of information is provided by just two guys: linebacker Paul Pickett who only played for Mike Dubose his senior year and Jonathan Richey, a walk-on quarterback who languished behind Tyler Watts and Andrew Zow during his time in Tuscaloosa.

These two may have been stand up contributors to the Tide team but they come off here as disgruntled players with axes to grind and Flax has provided the perfect opportunity to do so.

The one member of the coaching staff quoted in book, former offensive coordinator Charlie Stubbs, does provide a helpful sliver of insight into the working of the Dubose's staff. But even his contribution becomes painfully self serving before too long.

I'm certainly not about to defend Dubose's tenure as Bama's HC as any kind of high water mark for the program, but neither do I think he was directly responsible for every single thing that went wrong with the team under his watch as Flax seems to believe.

The author despises Dubose to the point he actually commends Dennis Franchione's leadership and integrity with out a smidgen of irony. Conversely, the tenure of Gene Stallings is held up as an idyllic period to the point that Flax insists on overlooking or marginalizing the problems it bequeathed on the next coach.

As much as Stallings is rightfully revered by the Bama Nation, he did the football program no favors with his the handling of the Antonio Langham situation and the subsequent fallout from the NCAA. A book that professes to be an insider view of the team in that era would be expected to address these events in more than just a passing manner. The forfeiture of the 1993 season isn't even mentioned.

The result is a reader is inclined to dismiss all of Flax's complaints and that's regrettable since there a number of points he makes here that are dead-on correct; Dubose was obviously in way over his head as head coach, Bob Bockrath had absolutely no idea what the hell he was doing as Athletic Director and the lack of talent on the roster proved to be an insurmountable hurdle in conference play.

If you are looking for an account of the program from Stallings' time at The Capstone to the arrival of Coach Saban you're much better off picking up Donald Staffo's recent effort Alabama Football or, even better, check out outsidethesidelines account posted right here on Roll Bama Roll.

Eventually what Crimson Slide succeeds in making a compelling case that the Alabama program had gone seriously awry in the late 1990s, but not for the reasons it outlines. What becomes obvious is that the players on the squad were almost completely overcome with their own sense of entitlement despite producing producing mediocre records to warrant it.

Say what you will about Mike Dubose but he still
deserves credit for the 1999 SEC championship.

Worse, the program had run so far amok that the players are unable to perceive how pathetic they had become.

What becomes apparent reading Crimson Slide is the Alabama locker room was as much a part of the problem for the program's mediocrity as anything done by the coaches ostensibly in charge.

The book constantly emphasizes how everyone but the players were to blame for the shortcomings on the football field after 1997. Out of condition? Bad conditioning program. Discontent in the locker room? Remote head coaching style. SEC Championship in 1999? Dumb luck and not that good a season anyway.

In one of the rare moments of honesty, Flax illustrates the problem flat out:

"Between 1997 and 2000 [Dubose's] players suffered massive injuries, skipped workouts or slacked through workouts, and scored bad grades in easy classes," Flax writes. "The majority of the 1997 class did not last or reach their potential. Of the 26 signees in 1997, 15 players were kicked off the team or transferred to other schools, or quit. "

Yes, the head coach is accountable for this but the responsibility of living up to the demands of being a championship-caliber team lies solely on the shoulders of the players. By Flax's account, the very idea that accountability should precede their own sense of entitlement seems to have never crossed their minds - a fact hammered home as the one player who seems to do this is held up as a negative example in the narrative.

Flax chastises Dubose for harboring favorites such as standout running back Shaun Alexander (who obviously was not interviewed for the book) and then presents anecdotes of the star running back's behavior in the locker room to support the contention. But in these instances Alexander is clearly assuming leadership and challenging his teammates to rise to the challenges facing them. That they chose not to certainly isn't a reflection on him.

Crimson Slide doesn't stop there though. Flax finishes his book with a chapter on how he believes the Alabama football program could be fixed and to call the suggestions appalling would be understating how horrifically bad they are.

He insists that the program needs to seek out blue chip players, and give them everything they want - up to and including paying them - since that's the only way to retain such talent. Worse, he insists that the Athletic Department should focus all of its attention on football at the expense of every other sport.

"Until the Alabama Athletics department spoils their breadwinners The Crimson Tide will continue to suffer through mediocrity and unparalleled disappointment," he writes. "Truth be told you're either all football, or no football."

I'm going to simply assume that Crimson Slide is more revealing about  the author's personal biases than an kind of realistic representation of the Alabama teams it purports to give the "inside story" about. One thing is for sure, the players it depicts wouldn't have lasted very long under Coach Nick Saban.