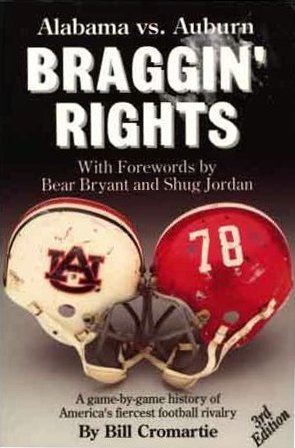 This week, Roll Bama Roll has invited Jerry Hinnen of War Blog Eagle -- by far the best source of information about Auburn football out there on the sports blogosphere -- to review Braggin' Rights, Bill Cromartie's book on the rivalry between The Alabama Crimson Tide and "that cow college on the other side of the state."

Greetings, RBR readers. I'm guessing most you know me by now, thanks to our annual Q&A and my need to pop up and whine incessantly at Todd whenever he has the brazen audacity to vote Central Michigan No. 21 in his BlogPoll ballot instead of Auburn. (How could you, Todd? Honestly.) But both Q&A time and BlogPoll whinging time are months away, of course, so why am I here?

Because the good folks here at RBR thought it might be a nice change of pace to inject some outside perspective into the Reading Room, and since an Auburn perspective wouldn’t be worth much when reviewing, say, Snake (unless you’d enjoy reading "We shoulda won in 1967, damnit, We shoulda won in 1967, damnit" over and over again, "All work and no play"-style, and neither you nor anyone sane would), Kleph asked me to read Bill Cromartie’s book Braggin’ Rights: Alabama vs. Auburn.

The concept of Braggin’ Rights couldn't possibly be simpler. It’s a year-by-year history of the Iron Bowl, one summary for every game, starting in 1893 and covering all 46 games through 1981. The book (as best I can tell) is out-of-print, and my copy is a second edition, concluding with Bear Bryant’s 315th victory in ’81; a third edition was apparently published in 1994.

I’d particularly recommend that third edition to Auburn fans, since finishing the chronology one year before "Bo Over the Top"—and with the Tide still riding their nine-game streak in the series—is, ahem, a bit of a downer. But I’d nonetheless encourage any fan with an interest in the series’ history, Tide or Tiger, to find a copy if they can.

Kenny Stabler's "Run in the Mud"

Because as easy reference material goes, Braggin’ Rights should prove awfully handy. If you’re the sort of fan, like me, who knows that the Snake rambled through the mud at some point in the late ‘60s but doesn’t remember the exact date, the season-long context in which the game was played, or other pertinent details like "why exactly was that game so legendarily painful for Shug Jordan?", the book keeps them all straight for you.

It was 1967; the Tide were ranked No. 8 with a 7-1-1 record, while Auburn sat at 6-3; after three straight losses and back-to-back blowout defeats against Alabama, the Tigers were desperate to avoid sending their seniors out without a win in the Iron Bowl … and then they blew chance after chance inside the 20 to let Stabler’s one big run carry the day.

As with most of the recaps, there’s a rough play-by-play, statistics, postgame quotes, and even some reproduced photographs and headlines from the state’s newspapers. If you need to look up any particular fact about any particular Iron Bowl, it’s here, and the year-by-year organization makes it easy to find.

(Braggin’ Rights would also make excellent bathroom reading material. Each synopsis is just a few pages long, and of course you can read one year, put the book down, and pick up right where you left off.)

That said, it’s hard to recommend Braggin’ Rights as a one-shot, cover-to-cover read. After a while the play-by-play, deluge of statistics, and endless references to elements like the series’ all-time score can start to run together and make for some pretty dry reading. The book’s best section comes in the pre-war, pre-cessation-of-hostilities days, when Cromartie relies heavily on the wonderfully colorful newspaper accounts of the day, like this passage from the Birmingham News’ story on Alabama’s 30-0 win in 1905:

"The team that it was believed would give Alabama a tough fight and play the Crimson and White to a standstill, was crushed and battered by a mass of muscle and educated chain lightning."

Let’s see someone sneak a sentence like that past their J-school instructors these days. My favorite sub-headline, from Auburn’s 1901 win in Tuscaloosa: "THE VISITORS WERE TOO HEAVY." These kinds of nuggets are all over the first third of the book.

But as Cromartie heads towards more modern times he leans more and more on his own descriptions and storytelling, and unfortunately he’s not much of a prose stylist. As mentioned, he can let the facts of each "case" overwhelm the narrative, references to issues outside the Iron Bowl (like Vietnam war protests or, weirdly, the Birmingham World Football League team from the ‘70s) feel painfully forced, and there’s always a stylistic awkwardness that reminds you you’re reading something written in the late ‘70s/early ‘80s. His portrayal of a pivotal play in the ’81 encounter:

"Late in the first quarter, Auburn quarterback Joe Sullivan (brother of Heisman Trophy winner Pat) completed a 31-yard pass to Ed West to Alabama’s 19. Driving on down to the eight, where it was first-and-goal, Coach Dye, shuffling three quarterbacks in and out of the game, now had freshman Ken Hobby at the controls. On first down, Hobby threw an ill-advised pass into the endzone. It was intercepted by Tommy Wilcox. ‘Drat! Drat! Drat!’ screamed Auburn fans."

Call me crazy, but I don’t think that even in 1981, Auburn fans were screaming "Drat! Drat! Drat!" after that play. But the passage still illustrates why the book is so intriguing; who knew that an allegedly staid coach like Dye would play three different quarterbacks, one a freshman, in the biggest game of the year? The older generation of fans who remember the game itself, yes, of course … but not me, that’s for sure.

So if reading Braggin’ Rights start-to-finish over a few days became a bit of a slog at times, it still managed to make an impression, an impression that might best be distilled down to: this series is important. The newspapers of the day make it clear that the Iron Bowl was the single biggest event on the state’s sports calendars as soon as the two schools agreed to play, and between the Alabama legislature’s attempts to broker a deal during the cessation, the endless sellouts at Legion Field, the larger-than-life status of the Bear and Shug, that’s never changed.

But it’s easy to forget, now that we’re almost 16 years removed from the 1994 clash-of-undefeateds, how critical the Iron Bowl regularly was on both the national and conference scene. Total up the two teams’ records heading into the season finale in 1971, ’72, and ’74, and you get a mark of 56-2. ("Punt Bama Punt," as the majority of you here no doubt recall, was the Tide’s only regular season loss in that four-season span.)

There was some pooh-poohing of the Iron Bowl’s importance from both sides in the final days of Tubby’s streak (as Auburn fans pretended to be bored with victories over Alabama in an effort to get under the skin of Alabama fans, and Alabama fans pretended the rivalry meant little to them in an effort to assert their superiority even when their team couldn’t manage it on the field … as I’ve written a few times, we all have our jobs to do), but I imagine that kind of chatter will stop if both teams can finally return themselves to national prominence at the same time. And as the historical precedent so painstakingly illustrated by Braggin’ Rights shows, there’s no reason they can’t.

That’s the way both of the Iron Bowl’s legendary coaches would have wanted it, anyway. Cromartie had Jordan and Bryant each write a brief foreword for the book’s first edition, and this is the way Bear’s ends:

"It is a good clean series that is important to the State of Alabama. And I’m sure that to Auburn people it is the biggest game of the year, just like it is to Alabama people. May that never change."

Jerry Hinnen covers Auburn football at War Blog Eagle (formerly The Joe Cribbs Car Wash) because somebody has to. He is also an occasional contributor to the SB Nation SEC blog, Team Speed Kills.