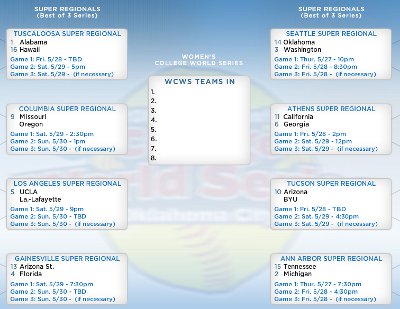 With a number of games that wrapped up on Monday, the original 64-team field of the 2010 NCAA Division I Softball Championship has been pared down to the 16 squads that will face off in the Super Regionals. The winners of the eight three-game series will advance to the Women's College World Series in Oklahoma City. 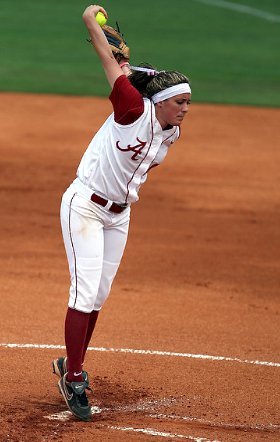 Alabama (51-9) is the No. 1 seed in the tournament and riding a program record 27-game win streak. The Tide advanced  to the next round of the tournament - the sixth consecutive time Bama has made it to the NCAA super regional - with a 5-2 victory over Atlantic Sun Conference champion Lipscomb on Sunday.

They will welcome the No. 16 seeded Rainbow Wahine of Hawai'i (47-13) this week in the NCAA Tuscaloosa Super Regional. Hawaii earned their way into the super regional with a 7-1 win over Texas Tech yesterday to win the Stanford Regional in Palo Alto, California.

The first game is slated for Thursday and will be televised on the ESPN family of networks (probably ESPNU). In addition to the Tide, three other SEC Teams remain in contention; No. 4 Florida (check out Alligator Army's coverage), No. 6 Georgia (check out Dawg Sports coverage) and No. 15 Tennessee (check out GoVolsExtra's coverage).

In a related note: Alabama set an attendance record for all the regional series with 7,140 fans on hand over the three-day event. The 2,647 fans who showed up at the Alabama Softball Complex on Saturday to see the tripleheader set the largest one-day record for the tournament as well.