The Crimson and White Roundtable Says Goodbye to Memphis Tider

Share All sharing options for: The Crimson and White Roundtable Says Goodbye to Memphis Tider


Via con dios you hairy son of a gun

As kleph noted yesterday, Memphis Tider's hosting duties for this week double as his farewell to the blogging world.  As an original participant in the C&W Roundtable way back when and also the supplier of the grill for the hilariously inept "Monsters of Blog" get together on that A Day, he will be missed.  On to the questions:

1. After hearing as much as I have about BJ Scott, Dre Kirkpatrick, Rod Woodson, etc, is it possible that the secondary this year may actually be better than last year's squad?

We interviewed Tom Luginbill for Yea Alabama a few weeks ago, and that was one of the topics of discussion.  I honest to goodness wish I could just post the interview now but Shakespeare got to get paid, son we have this whole "non-compete clause" thing going with Maple Street Press so you'll just have to fork over the cash to read it (pre-order available now!).  Anyway, the topic of course came up and I think his take on it pretty well gibes with everyone else's, namely that this group is, at least on paper, the most talented secondary that Saban has put on the field yet.  They have the ability and talent and were highly coveted DBs for a reason, but what they don't have is the experience of Javy, Marquis Johnson, and Kareem Jackson, and we just don't know how they are going to respond to adversity.  I would bet that by the end of the season they'll be doing fine, but in the early goings (especially against the likes of Arkansas) they are going to look like the inexperienced bunch that they are. All I can say is thank goodness for a pass rush package that will have Marcell Dareus, Courtney Upshaw, and Dont'a Hightower with their hands down...

2. How will all of the awards and honors, especially from his hometown, affect Mark Ingram's performance this season?

I don't think it will affect him at all.  First, he's always seemed like a good, hard working, humble kid ever since he got here and even in all the aftermath of the Heisman he's seemed like the same guy, always willing to point out the rest of the team and the staff and how they've helped him instead of taking credit himself.  Second, he also seems like the kind of kid who knows that hard work got him where he is, and with Trent Richardson and Eddie Lacy (plus everyone else) right there behind him fighting for carries, I don't think it would be possible for him to get a big head for long.

3. Could you see Greg McElroy as a legitimate early round selection in the NFL draft next year? Why or why not?

Honestly I can't.  Look, you can't argue with the kid's record so far and I'll be the first to tell you that you're an idiot if you really think McCarron is going to overtake him in fall.  Unless he's hurt or just has a meltdown of spectacular proportions, McCarron isn't seeing a quality snap in 2010.  With that being said, McElroy is more Jay Barker than Joe Namath.  He finds ways to win, sure, but he doesn't have the arm or the accuracy to be a consistent down field threat and without that there isn't a team out there that's going to spend an early round pick on him (I'd toss in a "if he runs a really fast 40 at the combine Oakland will be all over him" joke, but they finally made a smart first round pick with Ro and therefor I owe them my begrudging allegiance so long as he's in Silver and Black).  That's not to say he won't get drafted at all, though.  If he has another phenomenal season in the W/L column and has decent production and a solid TD/INT ratio, someone will take a shot on him late, but early round?  Never happen.  Unless he runs a really fast 40 at the combine... 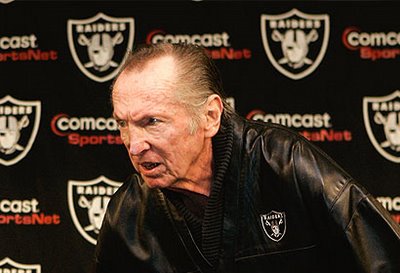 I just couldn't help myself...

4. James Willis was a master recruiter and one hell of a linebackers coach. We haven't talked much about what the loss of him means to our staff. Tell us what you think the effect will be with him gone to Texas Tech.

I don't know that we'll feel his loss on the field so much as in the living rooms, really.  When he came he provided a seamless transition into Lance Thompson's Mobile area recruiting duties since he recruited that area extensively for the Teagles.  I have faith that Saban's personal forays into Mobile, both as our head coach and back in his LSU days, will keep that pipeline open but whoever is responsible for that area now

5. Have you ever seen a state whose political views can be switched by football rumors? The Tim James fiasco is absolutely incredible to me how much football can mean to a state.

I'd be it probably wouldn't have gotten so blown out of proportion if it hadn't been for Finebaum fanning the flames, but yeah, now we can throw "football rumors" into the circus that is Alabama state politics, which I guess is really only appropriate.  What can I say, we have our priorities in order.