Today is Memorial Day, the day we set aside to commemorate those who have died while in the course of their military service to the United States of America. While the loses from the most recent conflicts justifiably carry the strongest personal connections for us this day, it is worth taking a moment to remember the sacrifice of the more than three million men and women from the armed forces who have given their lives since the American Revolutionary War.

And, as always, we appreciate the sacrifices made by all the men and women currently in active service around the world. Now, onto the roundup...

This Memorial Day the caretakers at Arlington National Cemetery expect to see a proliferation of mementos left at the graves of fallen service men and women - particularly Section 60, where many of those killed in the current wars are buried. Sometimes it's the traditional flowers but other times it's something more personally significant. "I have seen everything from report cards to an Alabama football ticket stub," said Roderick Gainer, a curator with the Center of Military History which collects, catalogs and stores the items for posterity.

The Alabama softball squad started off the NCAA Tuscaloosa Super Regional white hot with a mercy rule victory over Hawaii on Saturday. The Rainbow Wahine regrouped, took the second game of the double header and then went on to win the final game of the series on Sunday with a two-run, walk-off home run.  Meanwhile in Hoover, the Tide baseball team fell 4-3 in a hard-fought 11-inning battle royale against LSU in the SEC Championship Game.

Randy Kennedy at The Press-Register asks if the combo of Mark Ingram and Trent Richardson is the best running back duo in the history of state's football tradition. He gives a great rundown of the competition and notes the current Crimson Tide backs have their work cut out for them "but they are on the verge of joining some pretty impressive company."

The Minnesota Star Tribune has a short sports column about the colorful history of Steve Kerzie, an 89-year-old track and field official. He is the rarest of the rare, a man who played under Coach Paul W. Bryant at Vanderbilt; "He was rough and great." Bryant was an assistant for the Commodores under Red Sanders from 1940-1941 and served as acting head coach in a game against Kentucky - his first time to lead a team on the sidelines.

Dept. of Bring 'em On

Our poll last week asking which out-of-conference team Alabama should seek to get on the schedule in the future proved to be pretty popular with more than 1,500 folks participating. Notre Dame quickly took the lead and kept it the whole way, finishing with a full fifth of the vote. USC, who brought along a legion of fans with lots of time on their hands while waiting for the NCAA to call, came in a strong second. A number of Utah and Boise State folks also popped in to give their teams a good showing as well.

Thanks to everyone for participating. Here's the final pie. 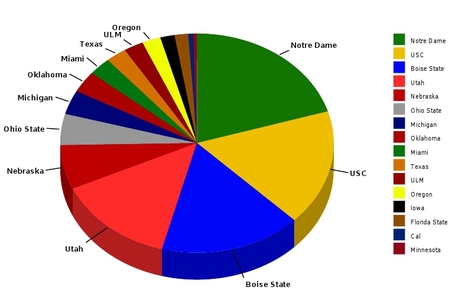