The RBR Reading Room: A Double Shot of Namath Edition

Share All sharing options for: The RBR Reading Room: A Double Shot of Namath Edition 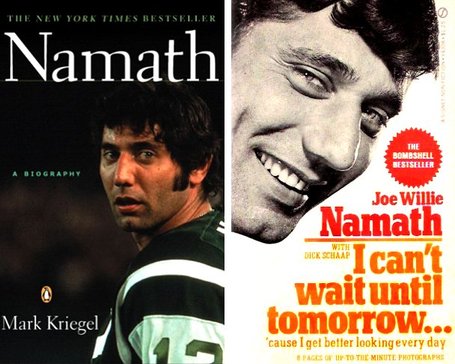 Ok gang, I'm up on this one, and I'll give you fair warning: I'm not all that great with book reviews. It's usually either "yeah, it was good, you'd like it" or "eh, I mean, if you want to read it..." with me, so you'll have to bear with me on this one since I was the only one among us who had read both of the Namath selections and (foolishly?) volunteered. Anyway, as far as just basic recommendations go, skip "I can't wait until tomorrow..." and head straight for Namath: A Biography. Kriegel did a fantastic job of researching the life and intimate history of Namath, while the autobiography was written and published during his battle with the NFL over his ownership of "Bachelors III." At it's best its filled with the kind of "aw shucks, I'm just trying to have a little fun" charm we all think of when we think Joe Namath, and at it's worst it's a self serving diatribe against an amorphous and poorly defined host of supposed enemies. What it isn't is an honest look at the upbringing and roots of Namath and an exploration of just how a free spirited trouble maker from the unlikely hometown of Beaver Falls, PA managed to become not just one of the greatest athletes of all time, but one of the greatest sex symbols and TV pitchmen as well. In that regard, Namath: A Biography is the far superior of the two, and the one I'm going to focus on here.

In Kriegel's research, we don't necessarily find out much about "Joe Namath." Sure, we get plenty of details on his early life and loads of interviews with childhood friends and classmates, but what stands out most by the end of the book is that the only person out there who has even a chance of knowing anything about Joe Namath is Joe Namath, and maybe even he isn't all that aware either. Most of this stems from his early years and what seemed like a heavenly anointed talent for "the hustle," the quality that allowed young Joe to simultaneously be the sensitive mama's boy at home, the gregarious mischief maker at school, the dynamic athlete on the field, and the self assured prince of the street. Namath just seemed to have a way to make anyone feel the way he wanted them to feel and see what he wanted them to see, all while understanding how to take advantage of it for his own ends. As an athlete, Namath excelled at basketball, baseball (he received offers from a number of MLB clubs and would have signed with the Pittsburgh Pirates if not for his mother's desire to see him go to college), and of course football, where he used those instincts against opposing defenses. Much has been made about Namath's arm, with even Coach Bryant proclaiming him the best pure passer he'd ever coached, but, at least in Krieger's estimation, it was "the hustle" that made Namath the quarterback into Namath the Legend. Consider Super Bowl III, before which Namath famously guaranteed victory. Through interviews with Namath's teammates we get a picture of a Jets team that understood they were the better team. The AFL was a passing league while the NFL was a more conservative "rushing and defense" league. Although the Baltimore Colts were heavily favored due to their defensive dominance in the NFL, the Jets were astonished at how poorly they defended the pass (which, in a league that never passed...) and how slow they seemed on film, even going so far as to ending film study early at times so they wouldn't get over confident. Namath backed up his guarantee but not through the air. Although Namath threw for over 200 yards, it was his understanding of the weaknesses in the Colt's defense and his ability to take advantage of them with his on the field play calling that "hustled" the Jets to a 16-7 victory. And so it was time and again; although the Jets were never able to reach the same heights as the 1968 season, with Namath at QB they always felt like they had a chance because Namath felt like they had a chance.

Beyond the football field, Namath's whole life was a hustle. Though portrayed as some icon of the counter culture come to subvert the all Americanness of pro football, Namath was virtually in step with mainstream America. Sure, his hair and sideburns were a little long, but he was apolitical to a fault, his musical tastes leaned more towards Sinatra than the Beatles, he appreciated fine cars and clothes, and at the end of the day Joe Namath's major concern was making sure Joe Namath and his family were taken care of financially. Despite the outrageous (for the time) deal he signed with the Jets, the biggest portion of it was payed out over many years and was designed to guarantee he and his family would have something to fall back on should his traitorous knees run out before his contract. Namath never bothered to dispel any of the myths and loose talk concerning his wild living, though, because he knew his legend was more important than his good name (famously acknowledging "booze and broads" were responsible for a poor performance because, even though he didn't believe it, he knew its what the people wanted). Even his commercials were a hustle. Joe Namath would sell anything to anyone if the check didn't bounce whether he liked and used the product or not, up to and including women's pantyhose. Just by being associated with the product and dripping that easy charm all over it Namath made you want it because you thought he wanted it, and that's really the one big drawback in Krieger's account. He's so caught up in the hustle that is Joe Namath's life that he gets hustled right out of it. There are plenty of details concerning Namath's early life, high school athletic career, his time at Alabama (did you know Namath was the only player ever allowed into Bryant's observation tower?), and his post football life, but it still leaves the reader feeling like they haven't really learned anything about Joe Namath. Which, I suppose, is really the only way a story about Joe Namath can end.