Share All sharing options for: Crimson and White Roundtable: Picture Me Roundtablin'

Picture Me Rollin' came out of retirement a few weeks ago to take part and is now hosting, so without further ado:

1. There’s been a lot of talk about schedules and future opponents recently with Georgia Tech dropping off for 2012 and 2013. This question gets thrown around a lot, but it’s pertinent once again. Pretend you’re Mal Moore. Who do you target for a future home-and-home series or who would you seek for a one-shot, neutral site game?

I was all set to talk about how I love the one off neutral site games and am kind of happy that GT has been pushed back, opening up a couple of dates to play in Atlanta or Dallas against some non-standard OOC fare, but then I thought to myself "actually, if I were Mal Moore, I'd be doing some revenge scheduling, because I (by which I mean "I" Todd Jones, not Mal Moore) am a small, bitter person with an unhealthy tendency towards misdirected rage."  So even though it would be cool to play Miami in Atlanta or a Big 12 or Pac 10 team in Dallas, I want a home and home with Louisiana Monroe. 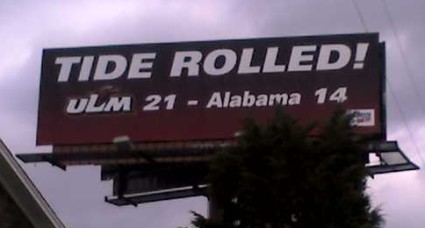 That's right, we need to get the Warhawks on the schedule for some good ol' fashioned revenging.  As it stands we're 0-1 against ULM, so it's gonna take two games to get back on the winning side of the ledger.  Plus, I figure if we pay a visit to their stadium the same year we play at Baton Rouge, it would give us a chance to revel in some good, hearty coonass misery twice in one year.

2. The recently completed season has gotten us all filled with fresh, good memories. A new crop of players have completed their eligibility and endeared themselves to Crimson Tide faithful forever as have some guys that are still on the roster. Have any of the recent players unseated their predecessors for the top spots on your own personal "all-time greatest" players list? If so, who are they?

I can't really say I've ever had a defensive lineman that I just really loved, but who doesn't have a special place in their heart for Terrence Cody now?  I've openly lobbied the Girl to name our first born son "Terrence Cody Jones" and have recommended it as a name to some friends of ours that are expecting.  Even though neither of those scenarios will likely happen, I can tell you this: The next dog we get, it's gonna be a boy, and it's gonna be named Terrence Cody.

I also have to say that Mark Ingram has become my new favorite Alabama running back.  I always considered Derrick Lassic to be my favorite because of the '93 Sugar Bowl, and I also always liked Shaud Williams if for no other reason than he transferred here from Texas Tech 'cause of Francione and then stuck it out after he left and played his heart out for Shula even though he had zero ties to the school or even state.  Plus, he was always the epitome of the "he plays bigger than his size" cliche to me.  But Ingram?  Man.  I keep going back and watching games and clips on YouTube, and he is just flat out amazing.  I have no doubt that Trent Richardson is just as good and will likely wind up being a "better" back the next few years, but the way Ingram runs is just beautiful.

And even beyond that, you just have to like the guy. You can't watch him accept the Heisman and go out of his way to thank every last person on the team and staff from the offensive line to Coach Saban to the interns without thinking he's either the most media savvy football player in the SEC or just genuinely a a good, humble kid.

3. Conference expansion is all the rage across the country, which in my opinion is a response to the recent and foreseeable dominance in the SEC. Now expansion of our conference is being discussed as a possibility. Are you for or against expansion of the SEC and why? Whether you are pro-expansion or not, list the teams you like to see added (and/or removed) to the league roster if expansion takes place.

Honestly, I really hope the SEC doesn't expand into a 16 team mega conference like the one the Big 10 is supposedly considering.  Its just too much and I think it turns the whole concept of a "conference" into a joke.  With two eight team divisions, there's either going to be less inter-divisional play or we'll add another conference game to the schedule.  I don't like the former because it just makes the other side's teams even more unfamiliar, and I don't like the latter because it's less opportunity for big time OOC scheduling.  Now, my heart wouldn't be broken if Arkansas were to jump ship for the Big 12 like a lot of people think.  Nor would I shed any tears should South Carolina decide to head for the ACC or Big East where they might actually be competitive.  I mean, here it is almost 20 years later and they still just seem weird to me as conference members.  Of course, whoever replaced them would have to be a great fit because then we'd just be thinking the same thing in a decade, so I propose Georgia Tech and Tulane.  Yes, Tulane.  They have just as much history in the SEC as GT (actually, were in the Southern Conference/SEC for two years longer than Tech) and even though they suck now....ok, I can't really say anything about moving up to the SEC from CUSA would really get them over the hump with a straight face, but the fact remains they just fit with the conference from a historical standpoint better than Arkansas and SC ever will.

4. Pre-season indications (which are admittedly totally my own prognostications) are that our two biggest rivals, Tennessee and Auburn, are going to suck and be somewhat improved respectively. Agree or disagree?

Tennessee is just a horrible situation right now so have to agree there. I don't doubt that Dooley is the man for the job and, unfortunately for us, could very easily right the ship and get Tennessee back to a high level of achievement, but he's really got nothing to work with up there this season.  Auburn is anyone's guess, though.  If they can get some young guys to contribute on defense they'll have a better year, but they were still a 3-5 team in the conference last year and looked like the absolute luckiest team in the entire world at times.  West Virginia gave them a win with one boneheaded turnover after another, the bowl game was one of the most head scratchingly sloppy games I've ever seen, and there were so many times that they just seemed to stumble into wins.  So while I can't necessarily agree that they are going to suck, I can't disagree either, because you just never know when the wheels will come off the offense (a la Arkansas and Kentucky) and how long they'll stay off.

5. Tell us what team will be the biggest surprise, good or bad, in the SEC this season.

Ole Miss will be surprisingly good, if only because Houston Nutt's teams are always best when no one is paying any attention.  I'm not saying they are going to challenge for the division or anything, but another Cotton Bowl (or other New Year's Day Bowl) appearance isn't that far fetched either.