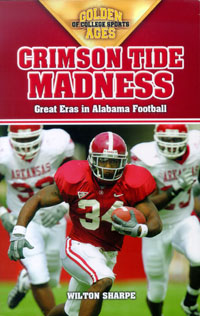 There is a certain category of Alabama football book that seems to find its way onto every Crimson Tide fan's shelf. These are the generalized titles that are fairly interchangeable in terms of content and packaging. They also are usually pretty cheap so they are usually the product of a moment of weakness while perusing a garage sale.

You're there thinking "lawn mower" but you look down and in the box among the Marrillion tape cassettes and dreamweaver wind chimes you see the image of Kenneth Darby booming it up the middle yet once again. You let out a sigh, curse Mike Shula under your breath and plunk down your three dollars on the folding card table the nice lady is using as her makeshift desk.

Crimson Tide Madness: Great Eras in Alabama Football by Wilton Sharpe is a prime example of this kind of book. Published in 2007 its one of a line of sports books featuring the "madness" name. Other teams covered by the series are Florida, Notre Dame, Ohio State and Georgia.

The angle here seems to be the particular format. It's not written as a narrative, but rather a series of quotes and anecdotes credited to the various folks who make the utterance. Most seem to be culled from newspapers reports and better books written about Bama football and the various personalities that have become legendary by virtue of their varied exploits.

It's an interesting approach that I assume is driven by the fact culling quotes is a hell of a lot cheaper to produce than hiring someone to actually write a book.

As a result it works almost like a devotional. The various entries serving as a way to remind the reader of the key elements of the Alabama  fandom and give comfort in the repetition of the well-known anecdotes. Flip it open to any page and there's an entry that that you know by heart but take comfort in hearing again anyway.

The first time you quit, it's hard. The second time, it gets easier. The third time, you don't even have to think about it. -- Bear Bryant.

In this respect there's nothing in Crimson Tide Madness that you shouldn't already know. Or, to put it the other way, if you read this book and run across something you don't know, you probably need to look it up or ask an old timer about it. But that's not to say the book is a complete retread, either.

For a number of the more legendary figured described in the book -- Coach Bryant, Joe Namath and Dixie Howell in particular -- the broad brush strokes of these comments somehow serves to give a truer picture of the subject than hundreds of words of prose. In some ways they are just too big be be tethered by the confines of straightforward descriptions and a smattering of impressions often gives a better sense of their stature.

Overall, Crimson Tide Madness is actually pretty good in it's selections. You get all the key ones you expect to see and then there's a real effort to highlight players and coaches that are often overlooked, such as Lee Roy Jordan, Bobby Humphrey and Coach Frank Thomas. The important games and key rivalries are all here and accounted for as well.

Reference-wise there a list of the rosters for every Alabama National Championship squad (sans 2009, of course) that I wish I had last year doing all the historical pieces on the Crimson Tide's Rose Bowl appearances. There's also an All-Time Greatest Players List that is a little suspect, to put it lightly.

So while Crimson Tide Madness isn't a book anyone should seek out to ensure the bookshelf devoted to Alabama football titles is complete it's also not one you should leave abandoned in a garage sale. It deserves a better fate. Pay the nice lady and give it a good home.