Since I was born in 1985, I was never alive to witness Bear Bryant's tenure at the University of Alabama. My wife got me a whopper of an anniversary gift.... A signed copy of Bear: The Hard Life and Good Times of Alabama's Coach Bryant from 1975. I had mentioned wanting to collect autographed sports books, and she decided what better way to start that off than with a book about Bryant. And yes, I did get her a gift as well... the watch she told me she wanted. I think I got the better deal, but I guess it's in the eye of the beholder. 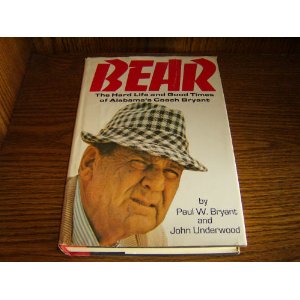