Four years removed, the day of reckoning for the USC Trojans has finally arrived and if the early indications are correct then this is going to be Albert Means: Part II. For those of you who were thinking USC was the NCAA's golden boy who would skate right through, well, let's just say it sounds like myself and Pete have been vindicated. According to a tweet from Bruce Feldman: 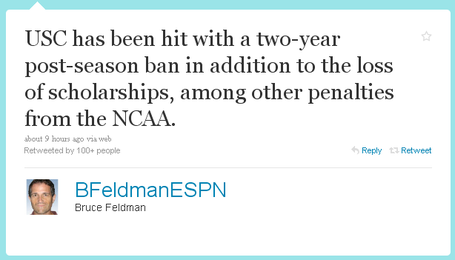 Meanwhile, the Los Angeles Times expounds upon the scholarship sanctions and other penalties imposed by reporting that:

A two-year bowl ban and a loss of more than 20 football scholarships are among the sanctions that the NCAA has dealt USC, a source with knowledge of the situation said Wednesday.

Limited recruiting contacts, probation and forfeiture of victories are also among the penalties regarded as possibly in play.

USC sources, who requested anonymity because they are not authorized to speak about the situation publicly, said they were bracing for the worst.

Again, if that is true, this is Albert Means all over again. Remember, for that debacle we received five years of probation, lost twenty-one scholarships over three years, and had a two-year bowl ban. It looks like that USC will receive that, and the end result will likely be even be worse because they will apparently also have the forfeiture of victories (notice, interestingly enough, the LA Times wrote of forfeiting games, not vacating, so maybe it will be that even though the NCAA has stepped away from using that punishment in recent years) not to mention all of the penalties against the basketball program.

We'll update this thread throughout the day with all of the latest reports, including some of the sure-to-be-juicy tidbits released in the actual report.

Update I: This isn't any actual news, but it is funny as hell to me. This comes via Conquest Chronicles, and is apparently what one of their upperclassmen tweeted upon hearing of the sanctions:

Can't say the guy doesn't have a sense of humor.

Update II: Um, guys, that 2004 national championship could be gone. I'm kind of hoping it sticks just because that is Pandora's Box, but ESPN has published a story with the following lead:

The USC football program will receive a two-year postseason ban, a reduction in scholarships and a forfeiture of wins from at least the 2004 season when the NCAA releases its sanctions on Thursday, a source told ESPN's Shelley Smith.

If that's true, wow. I really cannot see any way that you could forfeit wins from the 2004 season and still hang on to the national championship in the same year. Obviously this may be an erroneous report, but if it's true then that is absolutely huge. The Cal SB Nation Blog is already screaming from the top of their lungs that they are now undisputed 2004 Pac-10 Champions. I bet all of Auburn is topping off the tractors with 87 unleaded just in case. If nothing else, ESPN feels confident about that claim... it leads off both their website and Sportscenter.

Update III: According to ESPN reports being aired on Sportscenter, the vacated (not forfeiture) wins from 2004 do include the blowout victory over Oklahoma in the BCS National Championship Game. Huge.

Update IV: Joe Schad on Sportscenter reports that the BCS will follow in-step with the NCAA, thus if the NCAA vacates the 2004 wins for the Trojans, someone from the BCS will be heading soon to Heritage Hall and walking out of there with a crystal ball in hand. Literally and figuratively.

Update VII: Per SportsbyBrooks, this one may get very juicy:

I have no clue if that's true, but if that doesn't provide entertainment interest then I don't know what does. Given all of the celebs that Carroll had roaming the sidelines, I'm just praying to sweet Baby Jesus that Ricky Bobby is involved in this somehow.