The Crimson and White Roundtable Now Has "God Gave Rock 'n Roll to You II" in My Head, Jerks

Share All sharing options for: The Crimson and White Roundtable Now Has "God Gave Rock 'n Roll to You II" in My Head, Jerks

The Tower of Bammer is hosting this week, and their Bill and Ted themed opening question managed to get some horrible, non-makeup era Kiss stuck in my head. Suffer with me, won't you?


...put it in the soooouuuulllll of everyone...

1. If you could pick one ex-Tide player up from the past (via Bill and Ted’s phone booth), to come in and shore up one of the 2010 team’s question marks, who would it be?

I'm with TJ on this one...wait, I'm also a TJ. HOW HAVE I NOT REALIZED THAT BEFORE AND ALSO MY MIND IS NOW BLOWN. Anyway, like the other TJ said how can this answer not be Lane Bearden? I know it's tempting to say Rashad Johnson or Roman Harper or George Teague or any other great DB because we need experience and leadership in the secondary, but if we played a game tomorrow our best option at punter would be Taylor Pharr, a backup offensive lineman. We will be sinking or swimming with a true freshman this season and if you think having to worry about which super stud DB recruit is going to play the Star when we go nickel is the worst of our troubles, man you have another thing coming. We need a punter, and we need one bad, and for my money the kind of guy we need is the kind of guy that can not only punt with a torn ACL, but make a few tackles with one, too. So yeah, anyone got a time traveling phone booth they're not using?

Overall I have to go with "Yay, more downs", but it all sort of depends on the game and what's going on.  When you're running North Texas out of the stadium and the walk ons are getting snaps, it starts seeming a little tiresome, but early on and especially in tight games where first downs are precious and it really is something to celebrate, I'm all for it.

3 . It’s been a while since we’ve seen that fiery Scott Cochran tell us to get our flu vaccine, what should his next commercial be?

I was about to say "if Scott Cochran got on the TV and told me to go pick up trash off the side of the interstate I'd be out there every weekend" but then I remembered that I never got a flu vaccination because I watch the X-Files and know that vaccinations are nothing but the government taking DNA samples to warehouse and use for sinister purposes later so I can't really say he has much sway over me.  I mean, if he got up on the TV and was all "GO EAT YOUR WEIGHT IN PIZZA AND DRINK A CASE OF COKE FOR BREAKFAST" or "BE NICE TO OLD PEOPLE!" I'd do it, but only because I already do that, but if he got all up in my face from the TV and wanted me to do something even remotely inconvenient I'd just stay on my butt and think about what an awesome S&C coach he is instead of paying attention to the actual words flying at full velocity from his mouth.  Actually, he should just do a commercial where all he screams about is how awesome he is, and they can show clips of Alabama players ripping phone books in half and pulling tanks with their teeth, and it could be 17 hours long and be the best commercial ever.

4. When Urban Meyer finally decides to pursue his musical career and start the Acid Reflux Heart Attack Band, will Tim Tebow be able to join in playing mad drums, or will his pro career still be going strong?

Tim Tebow is probably never going to be a superstar on the level of a Joe Montana or Dan Marino, but I wouldn't be one bit shocked if he has a long, productive career as an NFL quarterback.  He has his deficiency (holds onto the ball too long, isn't a great pocket passer), but he also has the arm strength and downfield accuracy you want in an NFL QB, he's shown the kind of commitment, heart, and most importantly humility that it would take someone with those kind of deficiencies to put their every effort into overcoming them and doing what is necessary to become what his team needs, and he was drafted by a team that clearly saw something they wanted in him and will have to invest  the time and coaching into developing him considering all the money they spent getting him.  The kid is set up for success, and there's just nothing he's ever done that makes me think he won't take advantage of it.  He may never lead a team to the Super Bowl, but he's going to be a starter for someone and he's going to win a lot of games for them.

All that being said, I also wouldn't be surprised if Tebow hangs it up after only a few seasons.  Love him or hate him for it, but the kid's faith is a huge part of who he is and he may discover that football and the NFL may not be his particular calling after all.

Mark Ingram is going to rush for a lot of yards this Fall.

Trent Richardson is going to make a lot of defenders look foolish this Fall.

Marcell Dareus is going to affect a lot of quarterbacks this Fall.

Dont'a Hightower is going to get a lot of revenge against Arkansas this Fall.

John Brantley is going to have a lot of unfair comparisons to Tim Tebow made about him this Fall.

Les Miles is going to make a lot of stupid judgment calls this fall.

Mark Richt is going to have a lot of people curious about his job security this Fall.

Bobby Petrino is going to send a lot of people into a tizzy when he inevitably does something vaguely indicative of a possible move this Fall.

Dan Mullen is going to get a lot of praise and respect when he inevitably beats someone he shouldn't this Fall (I just really really hope it ain't us).

Lane Kiffin is going to make a lot of excuses this Fall.

The Big XII conference schedule is going to have a lot of awkward moments this fall.

Todd is going to eat a lot of chili this Fall.

The Girl is going to make a lot of storm out of the room in disgust over the results of all that chili gestures this fall.

The whinier portion of the RBR readership is going to make a lot of whiny comments about Emma Stone this Fall. 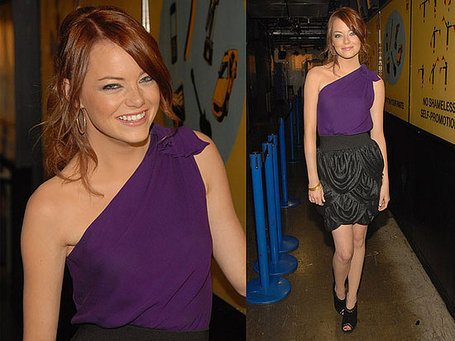