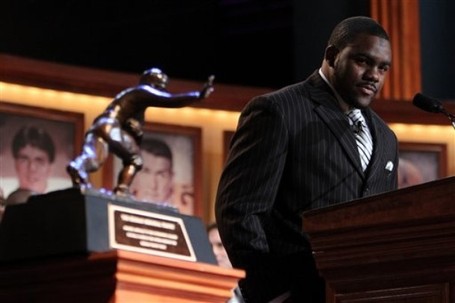 For Alabama fans, there's a lot of reactions to sift through in the wake of the NCAA sanctions on the USC Trojan football program. The first and foremost is the horrible sense of recollection from back when we were on the receiving end of one of these rulings. It's not a pleasant sensation and it's not one we take much pleasure in seeing any other fan having to endure.

Still, after weeks of being told that our assessments of what would happen were hopelessly off-base and nothing like that could possibly happen to the Trojans, well... I'd be lying if I didn't admit to a bit of schadenfreude over that. And there's the natural human delight in watching hubris take it's inevitable path to absolute destruction.

But after that wore off - and it does surprisingly quickly - I was left with quite another reaction, and that was thankfulness. Thankfulness for the Alabama program that has finally been rebuilt from the wreckage left in the wake of the Means case and the lessons learned from it have not been for naught. It was the hardest trial this program has ever endured but by going through it Alabama has built an Athletic Department that sets a standard in the sport. If there's any doubt just look at how the textbook case was handled by the university.

I have a hard time imagining a scenario where Coach Saban would be unaware of any assistant's connections with agents much less allow it to continue (or, god forbid, permit them access to the locker room and sideline). I find it difficult envisioning Mal Moore dismissing allegations as "nothing but a lot of envy." I find it simply impossible to believe Alabama's Heisman Trophy-winning running back Mark Ingram would ever do anything like what Reggie Bush has done to his team, his school and the host of fans who admired him.

The one thing I'm finding myself thinking about over and over again is last year's Heisman Trophy ceremony and Mark Ingram's acceptance speech. Never have I been so glad for this young man to be representing Crimson Tide football than I am today. Because no matter what you think about the fairness of the sanctions themselves given the facts of the case made by the NCAA against USC, you can't argue that "student -athlete 1" is a loathsome human being.

Spencer Hall nails it pretty well over at EDSBS:

Reggie Bush comes off in the report as nothing less than a complete asshole: wheedling cash out of his business partners for a '96 Impala with rims and a booming sound system, "getting a big head" according to testimony and asking for more, refusing to cooperate with investigators and finally burning everyone involved in the case by ditching his prospective business partners--who, as demonstrated, wasted thousands of dollars on him--and torching his school's football program in the process.

The COI report paints a picture of a man who had two goals - money and fame - and the USC football program was more than happy to provide it to him. And now Bush has gotten these things he's shown few qualms at throwing his alma mater under the bus. I simply cannot conceive of Mark Ingram doing any of these things and I defy you to find any hint in his past that suggests he might.

As happy as the 2009 National Championship made me - and it's damned hard to put into words how happy that actually is - it's immeasurably more important that it was done by this team. And I've never been more grateful for that fact than today. So thank you, Mark. Thank you, Coach Saban. And thank you to everyone who worked their ass off on the field, on the sideline and in the university offices to make this a team the University of Alabama can be proud of.