While it has seemed like a mere formality for the past 48 hours, Chip Brown confirms once again this morning that Nebraska will be leaving the Big XII: 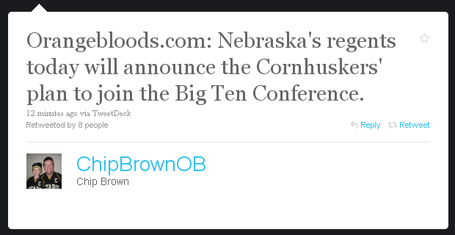 If you want to follow the events online, the Omaha World-Herald will have a live blog of Nebraska Board of Regents meeting this morning.

With Colorado having officially bailed yesterday, this will likely put the Big XII over the top. After the departure of Colorado, the only real chance of having that conference stick together was to have the Big Ten somehow, someway pull the rug out from under Nebraska -- Notre Dame joining, perhaps? -- in a way that would force the Cornhuskers to remain in the Big XII. Obviously, though, that is apparently not going to happen, and that will spell the death knell of the Big XII as we know it.

With both Colorado and Nebraska gone, the Big XII is left with two vacancies and is suddenly down to ten teams in an era of budding super-conferences. Put simply, as I have said many times the past several days, there just aren't any viable replacement candidates out there to plug into the conference and move on. The Big XII is done, the question now is just who goes where, when do they officially announce their moves, and what becomes of the handful of schools not attractive enough to be wooed by the Pac-10, the Big Ten, or the SEC.

And, frankly, we know where Texas, Texas Tech, Oklahoma, and Oklahoma State are going... to the Pac-10. The question is just when, and most reports have it pegged as probably being sometime next week before we hear anything official.

You do have talk that the SEC is indeed wooing Texas A&M, with the A&M-to-the-SEC contingent within the Aggie administration being led by regent, and former Alabama coach, Gene Stallings. I cannot necessarily find any reason to substantively doubt the interest on both sides... surely the SEC is appealing to A&M, and you know Mike Slive would absolutely love to add such a massive institution with incredibly deep pockets that would also help bring the SEC one of the nation's largest media markets (Houston). According to Brown:

But sources say Texas A&M is still seriously exploring joining the Southeastern Conference. That charge is being led by A&M regent Gene Stallings, who, of course, won a national title in 1992 at Alabama as head coach.

The other four Big 12 South schools may wait through the weekend before making any kind of formal announcements about joining the Pac-10 to allow some time to pass from Nebraska's expected announcement on Friday.

But if Texas A&M waits too long to commit to the Pac-10, the Aggies could be put on the clock, possibly opening up their invitation to another school, sources close to the Big 12/Pac-10 merger said.

Schools that could possibly be considered for invitation to the Pac-10 in place of Texas A&M would include Utah and Kansas, among others, the sources said.

But, of course, there is reality. Texas is not coming to the SEC, and Texas A&M is not going to go anywhere without Texas following them. Oh sure, some Aggies may feel very strongly about wanting to join the SEC -- and they might even wait it out a bit and be given a hard "deadline" by the Pac-10 -- but realistically it is not going to happen. The political machinations within the state of Texas will never allow it, and as entertaining as a discussion on the subject may be, it would really just be a waste of time discussing a hypothetical situation almost certain to never have any chance of coming to fruition.

Truth be told, I imagine sometime next week you will see Texas, Texas A&M, Texas Tech, Oklahoma, and Oklahoma State announce that they are joining the Pac-10. And from there, that's when it will begin to get very interesting for the SEC, and the days of officially sitting on the sideline and munching on the proverbial popcorn will come to an end. As I've said for weeks, if the gauntlet is thrown down and other conferences expand, the SEC will expand in kind. And now, with the Pac-10 poised to go to sixteen teams and the Big Ten poised to go to at least fourteen, the SEC will likely begin making some moves in the near future.