Though largely forgotten now, Nick Saban had more than his fair share of critics shortly after he arrived in Tuscaloosa. Aside from those who accused Saban of being the ultimate liar and the destroyer of the college game, believe it or not more than a few questioned his legitimacy as a football coach. More than a few argued that Alabama grossly overpaid for him. Others thought he really wasn't much of an actual coach, but only a great recruiter who won by putting more talent on the field than his opponent, and someone who wouldn't be able to continue those recruiting successes at Alabama. Still others thought he was just another NFL washout who probably wouldn't be able to re-establish himself as an elite coach once again in the college game.

All of that is laughable now, of course, after Saban has gone on to have even greater success in Tuscaloosa than he had in Baton Rouge. With him now having two national championships in the BCS era at two different institutions -- which, in and of itself, puts him in a class all to his lonesome -- after building both from the ground up (with hopefully more to come), Saban has probably transcended the label of a mere "great" coach, and at this point it can probably be legitimately debated just how he compares with the all time greats.

The two biggest landings to date, of course, are Derek Dooley at Tennessee and Jimbo Fisher at Florida State, men who have now risen to the top of traditional powerhouse programs. Perhaps not as well known, however, is Michigan State head coach Mark Dantonio, who served as a defensive backs coach for five years when Saban resided in East Lansing. Dantonio is now heading into his fourth year at Michigan State after leading the Spartans to three consecutive bowl games. Likewise, Mike Haywood -- who spent three years under Saban as running backs coach at LSU -- is heading into his second season as head coach at Miami (Ohio). And, finally, another major landing is waiting in the wings with Will Muschamp being dubbed the head coach in waiting at Texas. 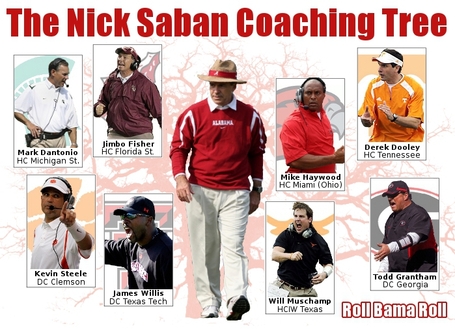 The impact is being felt on the assistant level as well. Kevin Steele turned a short stint at Alabama into a defensive coordinator position at Clemson, which he felt to be the next step in a return to the head coaching ranks. Likewise, James Willis turned a one year stint in Tuscaloosa into a defensive coordinator position in his own right, with him joining his other old boss Tommy Tuberville at Texas Tech. Ron Middleton is another, leaving Tuscaloosa at the end of 2007 and becoming a man of all hats for David Cutcliffe at Duke, where he is associate head coach, tight ends coach, and special teams coordinator. Finally, we have Todd Grantham at Georgia. He earned coaching jobs in the NFL after spending a three year stint as Saban's defensive line coach at Michigan State, and he has now been given the defensive coordinator position in Athens, where he is installing the 3-4 defense and where he will likely be the single person who, more than anyone else, will determine the future of the Mark Richt era of Georgia football.

Furthermore, this is a trend that shows no signs of stopping any time soon, as the current coaching staff at Alabama is littered with men destined to ascend the coaching ladder. While there are some who likely relish their careers as assistants -- Joe Pendry and Bobby Williams, for example -- others are clearly living on borrowed time in Tuscaloosa. Offensive coordinator Jim McElwain will be rewarded with a head coaching job in the near future, the question is just how long he decides to hold out and where he decides to take over. Simply put, offense sells tickets and high-end offensive coordinators rarely remain assistants for long; McElwain will coach his way out of Tuscaloosa in the near future. Likewise, linebackers coach Sal Sunseri is on the fast-track as well. He turned down overtures for the Florida State defensive coordinator position last year, but the point remains that -- if he so chooses -- it seems to be only a matter of time before finds himself leading a defense at a powerhouse program (or more).

And then we have Kirby Smart, one of the undisputed rising stars of the coaching ranks. His alma mater Georgia pursued him heavily last year and threw a massive amount of cash at him in an attempt to convince him to come back to Athens -- Smart is a Georgia native and was an All-SEC defensive back at UGA in 1998 -- but Smart chose to remain in Tuscaloosa. The real-world implication from that rejection was relatively simple... Smart will not be leaving Tuscaloosa for a defensive coordinator position, he's only going to leave as a head coach. At only 34 years old, the sky is the limit for Smart. No one doubts that he will be head coach of a powerhouse program one day, and if he really wants it the odds are that he could very well parlay his success into a head coach in waiting position in Tuscaloosa. While Saban tends to understate things, he has been relatively outspoken in the past in support of succession planning, and given that he will almost certainly have a role in choosing his successor at Alabama, it should come as no surprise to any observer if Saban endorses Smart as his successor in Tuscaloosa.

At this point, simply put, becoming a member of a coaching staff led by Nick Saban almost guarantees an upward move in the coaching ranks.

But it does not have to be that way. Some people hold onto the notion that a natural byproduct of winning is raided coaching staffs, but history tells a slightly different story. Some programs do experience that, to be sure, but many others do not. Take Phil Fulmer, for example, and his run at Tennessee. For all of the success that program had during its peak in the late 1990's and early 2000's -- complete with a national championship and a literal NFL factory in the locker room -- few outside programs began poaching the Knoxville area looking for coaches. At the time many of those who imbibed the puke orange kool-aid wrote that off as a seemingly amazing ability of Fulmer to retain his assistants, but in hindsight what it was really telling us was that the Vols were a poorly coached team that was really just getting by mostly on raw talent. Of course, Tennessee fans eventually learned that bitter lesson the hard way, beginning with Nick Saban's upset of ungodly-talented Volunteers in the 2001 SEC Championship Game.

Simply put, some coaches win for a while, fizzle out, and fade into oblivion. Others, however, spin off countless proteges who use the lessons they learned to forge their own successful coaching careers and to carry on the influence of their mentors. Saban clearly belongs in the latter group, not the former. As his coaching tree continues to blossom, Saban's legacy and impact on the college game will only grow further.

Note: big hat-tip to Kleph for all the work entailed in generating the Saban coaching tree image. May that he have to make many more additions in the years to come.