Share All sharing options for: Bad News for Erique Florence

We have some surprising news coming out of Valley regarding 2011 safety prospect Erique Florence. Per Andrew Bone: 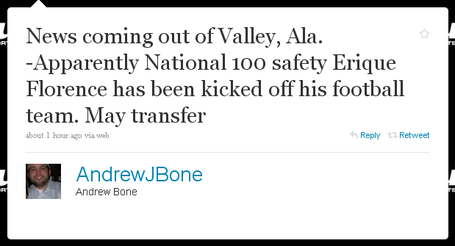 For the record, Florence is a highly-touted prospect and has been recruited by Alabama. Florence is widely considered one of the better prospects in the nation, and most have him as one of the top five players in the state of Alabama in the 2011 class. So far everything has shaped up as an Alabama v. Auburn battle, but in terms of offers Florence could realistically go just about anywhere in the country.

With that said, however, the early indications are that Florence will be heading to Auburn. His hometown of Valley is right in the backyard of Jordan-Hare Stadium, and he has visited the Plains more frequently than Tuscaloosa. While he has previously stated that he will wait and announce his decision after the 2010 season -- he also plans to play in the Under-Armour All-American game -- the smart money at this point is clearly on him signing with the Tigers.

With the latest news, however, I doubt anyone is going to be shedding any tears if he spurns the Tide. There have previously been rumblings of off-field issues for him, but clearly those whispers go to another level after all of this. While Alabama could certainly use more talent in the defensive backfield -- and while the odds are probably pretty decent that we may continue recruiting him -- we already bagged the top safety prospect in the country, and undoubtedly more highly-touted DB's will follow regardless of what happens with Florence. At this point, unless there are some serious mitigating factors in play here, hopefully we will just move on to some other prospects.