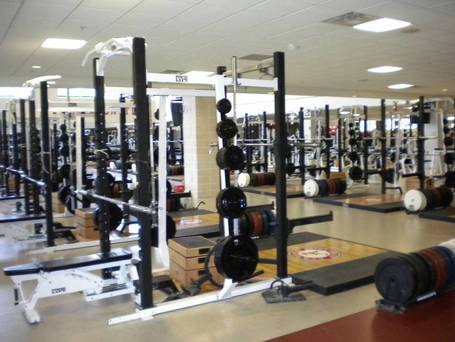 Pictured above is the training and conditioning facility. You might call it "Coach Cochran’s Office". The photo does not fully capture how vast the space is. By way of comparison, I have also been to the Titans training facility in Nashville. The locker room facilities are equivalent, but the Tide’s weight room is larger and has more equipment than the Titans.

Evidence of Coach Saban’s philosophy is everywhere you look and the players cannot go to and from the practice field without encountering motivational messages. For example: 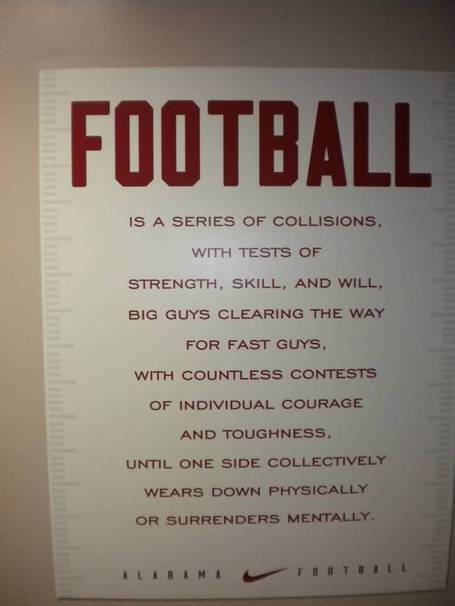 As the players leave the locker room and head to the practice field they have to pass by a pyramid of the logos of the teams they will play this season. 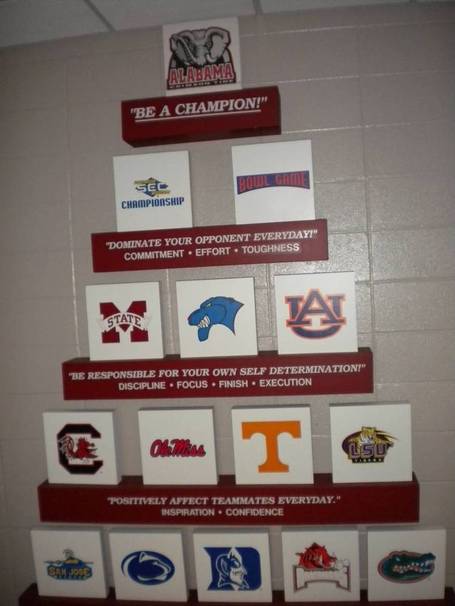 As each game is played, when the Tide wins, the opponent’s logo is removed from the pyramid and placed on the wall leading from the locker room. Each player who contributed to the victory autographs the logo and it remains on the wall as evidence of the team’s success. 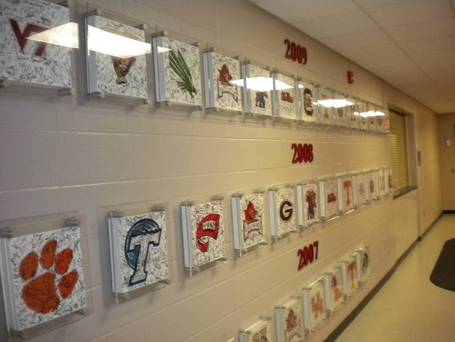 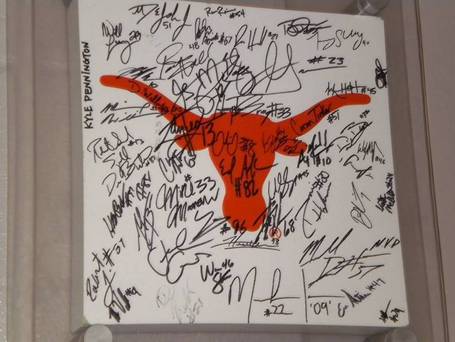 Teamwork, commitment to the team, and to the program are ingrained into the culture. We asked our guide about Coach Saban’s statue along the Walk of Champions. It should be completed and unveiled prior to the opening game this fall. How will Coach Saban be depicted; coat and tie, sideline attire or dressed for practice? Dressed for practice; complete with straw hat and wind-breaker vest. After all, he’s a working coach. But the statue nearly didn’t happen. Coach Saban did not initially consent to have his likeness cast in bronze and put on display. He relented only after the University agreed to this condition: In addition to his statue, there will be a bronze plaque containing the name of every player who contributed to the 2009 season! University officials like the idea so much that they plan now to retrofit each of the existing coaches monuments to include similar plaques for the other 12 national championship teams.

Another example of this culture of teamwork is found in the home locker room at BDS. Notice the Alabama logo in the floor of the locker room: 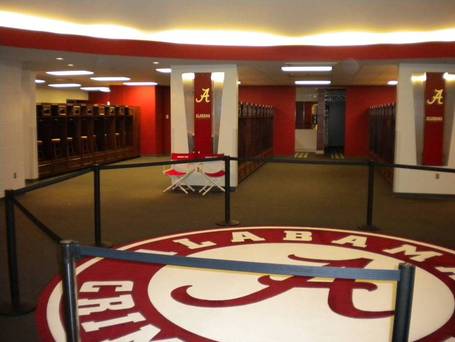 It is roped off for a reason.

No individual is allowed to step onto the logo. On game days, the team as a whole gathers on the logo and takes a knee. The ceiling above this spot is a dome, and whatever is said from that spot can be heard everywhere in the locker room. This is where the team spends its final moments before moving out of the locker room and onto the field for the game. 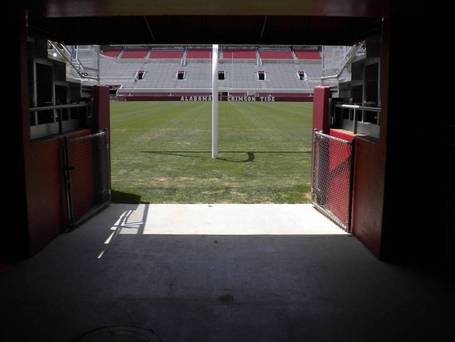 This is the portal through which the team enters the field.

Wherever you are in BDS you realize that it is a big place. But there is nowhere that the stadium seems larger than down on the field.

The work on the south end is nearing completion. 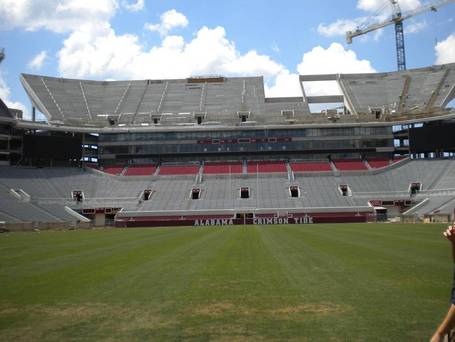 The south “Zone” club seats are those in red in this picture.

The south bleachers, including the upper deck will be student and faculty seating.

Future plans are to replace the existing bleachers throughout the stadium with improved bleachers that have back rests.

Tuscaloosa is pretty empty in the month of May. Building construction and road work are going on everywhere on campus. But before you know it, the hum of construction work will be replaced by the bustle of students moving into the residence halls and heading off to class at the start of the fall semester. Across campus, the sounds of pads colliding, whistles blowing and coaches exhorting players through drills will be heard.

This is Memorial Day weekend; the traditional start of the summer. Come Labor Day weekend, the 2010 Crimson Tide will take the field at Bryant Denny Stadium to begin a campaign to repeat as the national champions of college football. On Labor Day itself, the San Jose State logo will be off the pyramid and on the wall. One down. Thirteen more to go.