The past couple of days have been highly eventful in terms of conference expansion news, so let us get up to speed. To begin with, let us start with the following story from the Associated Press:

The Pac-10 board has given commissioner Larry Scott the authority to pursue any possible expansion for the conference.

Scott spoke following the conclusion of the conference meetings in San Francisco on Sunday. Earlier in the day, he addressed the chancellors and presidents about possible expansion and was given authority to move ahead without having to go back to the board for approval.

The upside of that is that Scott now has free reign to do whatever he wants whenever he wants with regard to conference expansion. He can, at his own discretion, choose how much he wants to expand the Pac-10 -- twelve, fourteen, or sixteen teams -- and he can choose which institutions get invitations. The vast amount of power entailed in that discretion speaks for itself. And, of course, it is common sense that large amounts of power have a tendency to be put to use and to not merely sit around unused and collecting dust, so perhaps the following report today in the New York Times should come as no real surprise:

"Larry Scott wants to fire the first bullet," said a Big 12 athletic official who spoke on condition of anonymity because he was not authorized to talk publicly about the topic. "The pressure is being put on Nebraska and Missouri. Over the next two weeks, we’re going to know where we stand."

That is perhaps the most interesting dynamic in all of this. The overwhelming majority of the attention regarding conference expansion has focused on the Big Ten and all of the supposed earth-altering moves they are pondering. In reality, however, the Pac-10 is also looking to expand and has probably been just as aggressive in their attempts at doing so, but just haven't tried to create the media buzz in the process. That is until now, anyway.

And with the Big Ten talking expansion to anyone who would listen the past few months, perhaps this statement by Michigan State President Lou Anna K. Simon should not be unexpected:

"Our announcement in December has caused institutions to consider their future and conferences to consider their future," said Michigan State president Lou Anna K. Simon, the chair of the Big Ten’s council of presidents/chancellors. "That has had an impact on our deliberations. … We had targeted a timeline that was as long as 18 months. It’s possible that the timeline may be altered, but not the process.

"The actions of others are obviously important to us and they impact us, but the process is as we’ve outlined it."

That is an elongated response, of course, but the additional words cannot bury the underlying meaning of it. Put simply, if the Pac-10 decides to make a move in the next few weeks, the Big Ten will act immediately. Oh sure they may take their sweet damn time if given but the opportunity, but if the hand is pushed they will respond quickly.

The interesting thing about all of that, however, is that there does not necessarily need be a quick response. Aside from the Texas-to-the-Big-Ten rumors -- which realistically will never happen -- the Pac-10 and the Big Ten are not fighting over the same schools. The Pac-10 is not interested in the viable Big Ten expansion candidates, and by that I mean Notre Dame, Nebraska, Missouri, and schools from the Big East. In that vein, the Pac-10 and Big Ten could expand at their own volition without one being necessarily forced by the other, but in any event it does not seem like either conference will allow that.

Now, with all of that established, moving on to the specific teams, the latest likely possibility has the four Texas schools -- Texas, Texas A&M, Texas Tech, and Baylor -- moving to the Pac-10 along with Oklahoma and Oklahoma State to form a "Pac-16," which would be broken into two eight-team divisions (essentially "old" Pac-10 versus "new" Pac-10"). The thinking behind that is as sound as it is obvious. For all of its crown jewel status, the political machinations in the state of Texas will likely require the 'Horns to bring along the Aggies, Red Raiders, and Bears. There is, realistically, no way that either the SEC or the Big Ten could accommodate all of those programs, so in essence it is likely either Pac-10 or bust. Sure, getting Texas and Texas A&M would be a great move, but realistically you have to be able to carry their extra baggage, and only the Pac-10 can feasibly do that at the moment.

And besides, really, why would Texas and Texas A&M want to join the SEC? Per Pete Thamel... 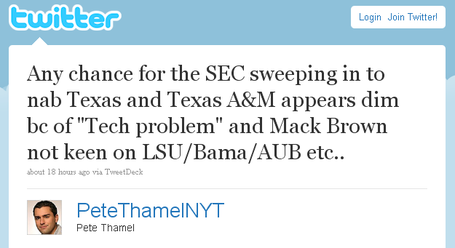 Honestly, why would Mack Brown and company want to join the SEC and then have to fight through Alabama, Florida, LSU, Georgia, Tennessee, Auburn, and whoever else we add just to get to the top of their own conference? Especially when they could just go to the Pac-10 where their biggest opposition, aside from the Big XII members they bring with them, will be a Lane Kiffin led USC program likely trying to recover from harsh NCAA sanctions.

Now, for the Big Ten, this all probably has very few, if any, implications. The Texas rumors were probably nothing more than wild fantasies in the first place, and of their "realistic" candidates, nothing that the Pac-10 does affects any of those institutions. The same schools they were looking to bring into the mix will still be there when they ultimately look to expand, and those schools should be just as willing as before to join the expanded Big Ten.

For the SEC, though, taking Texas and Texas A&M off the board does have a pretty big implication. With those two schools off the board, it effectively means that the SEC must expand within its current territory, thereby largely eliminating the ability of the SEC to significantly expand its geographic footprint. Suddenly, if the SEC is indeed going to expand, the only realistic possibility for doing so is to raid the ACC of the likes of Florida State, Miami, Georgia Tech, Clemson, and Virginia Tech. One of those teams will left out in the cold, of course, but if the SEC does expand to sixteen teams, the additional four will likely come out of that group of five.

And in that sense, believe it or not, if conferences are truly going to expand to sixteen teams, we actually have a pretty good idea of who will go where. The four schools from Texas will go to the Pac-10 along with Oklahoma and Oklahoma State. The Big Ten will pick up Nebraska and Missouri to go along with three teams from the Big East. The SEC will raid the ACC. The Big XII will implode, and the Big East and the ACC leftovers will likely try to cobble something together, with the same going for the Big XII leftovers and the Mountain West.

In the end, though, the wild card in this whole deal is probably still Notre Dame, and they are the ones who could significantly alter expansion for everyone. The Big Ten is still pursuing them, I'm sure, and I would bet good money that at some point the powers-that-be at the Big Ten make one final bid for the Fighting Irish. That means that, for all of their independent blustering, Notre Dame will have to look in the mirror one final time and make that decision, one that could impact them for decades to come. Given the super-expansion that will follow, the choice for Notre Dame is likely pretty clear... join a conference now, or be independent forever.

And again, Notre Dame could significantly alter the course of all of this. Their preference is for the Big Ten to expand to twelve teams, not sixteen, and if they agreed to join the Big Ten that would probably end any thought that the Big Ten previously had of expanding to sixteen teams. That would probably keep the SEC from expanding -- clearly, the SEC would prefer to keep the current order -- and that could also limit the expansion of the Pac-10 to twelve teams. For all of the talk of Texas, Notre Dame could still be the monkey wrench in conference expansion.