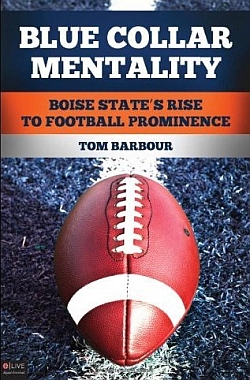 Boise State exploded into the national football consciousness on New Year's Day 2007 with a thrilling 43-42 Fiesta Bowl victory over the Oklahoma Sooners. We've all the seen the highlights a million times by now: the hook and lateral, the statue of liberty play to win the game, Ian Johnson proposing to his girlfriend after scoring the winning two point conversion. No matter whether your take on the Bronco's is that of lovable and plucky underdog or obnoxious pretender fighting for scraps from the big boy's table, you have to hand it to them, they go out and get the job done with the schedule they face. People may say that Boise doesn't play anyone, but nobody else has been as dominant in their conference as BSU, not even in the Sun Belt or MAC. With two BCS bowl victories in the last four seasons and record of 122-19 since 1999, the Broncos have earned the right to be taken seriously.

How did this team that's only been Division One (now FBS) since 1996 ascend to such heights so rapidly? That is the question that Tom Barbour's Blue Collar Mentality: Boise State's Rise to Football Prominence seeks to answer. That's also the reason that I, as a "fan of the game," wanted to read the book. Some of you may think a review of this book has no place on an Alabama football site, but given the amount of virtual ink spilled about the Tide and Broncos both here and elsewhere, it seemed like a worthwhile endeavor.

Unsurprisingly, the book begins recounting the 2007 Fiesta Bowl and after that it's a bit of a time-hopping affair that might be talking about the Broncos' time as Boise Junior College one minute and their first season in the WAC the next. This episodic, meandering style was a bit frustrating and often lacked the coherence to pull off those time-hopping writing devices, which can be rather satisfying to read when properly executed. Even the first chapter, titled "The Fiesta of All Fiestas" inexplicably ends with a roughly two page story about former Boise State quarterback Bart Hendricks who last played for the Broncos in 2000

One of my other issues with the book is that there is an incredible amount of tangential information in it. There's one (admittedly, brief) section that debates who the greatest athlete from the state of Idaho is. It's a discussion of two Major League Baseball players. One can only assume it's included because one of the players played football for the Broncos when Boise State was a junior college.

At other times, it feels more like a collection of related newspaper or magazine articles rather than a book. Chapter two pits the recruiting and career experiences of cousins Gerald and Rufus Alexander against one another. Gerald, played cornerback for Boise State and Rufus played linebacker at Oklahoma. The cousins turned opponents (Gerald from California and Rufus from Louisiana) only met for the first time in the week leading up to the 2007 Fiesta Bowl. It's a great story, and it's certainly interesting, it just doesn't seem to mesh well into what the book purports to be about.

The blurb on the back of the book states:

Through meticulous research and individual interviews, Tom discovers what makes up a football program relying on a Blue Collar Mentality, rather than blue chip players to find itself, year after year, in the hunt for a top 10 ranking and a major bowl berth.

Knowing that Barbour interviewed former players, I was hoping for more insight on how the program is run instead of vague comments about Boise State's athletic director being a visionary and carefully selecting head coaches (to their credit though, carefully selecting head coaches seems to be something we're only periodically interested in and/or capable of and they've seemed to have mastered the art.)

Barbour does spend a lot of time talking about recruiting and how the coaches have had success in developing a keen eye for talent (as well as for player development) given that Boise isn't capable of recruiting on the level of BCS conference programs. The Broncos' success is even more incredible considering they've only ranked fourth out of nine teams for recruiting budgets in the WAC. Credit must certainly be given to the staff for both recruiting acumen and development given their serious limitations.

I have two issues with Barbour's heavy coverage of recruiting though: There's a lot of "X team's recruiting class averaged ____ amount of stars and Boise's averaged _____ amount of stars and look at what Boise did instead of that team." There's certainly something to be said for doing a lot with a little, but it's incredibly statistic heavy and success on the field isn't the kind of thing that can always be quantified numerically, especially when comparing teams from different conferences. I'm guessing this heavy lean on number crunching is from Barbour's time as a CEO of a regional securities brokerage firm in California (kudos to him for that by the way, it's an impressive accomplishment.)

My other issue with all of the recruiting talk is the inclusion of the instance of Allen Bradford at USC. Bradford went to USC in 2006 and switched positions twice and didn't play much his first two years (28 total carries.) Barbour seems to insinuate that he was a star player lost in the rough waters of a huge, powerful program. Playing time doesn't come easy at big programs like that and it has to be earned and Braford's gone on to some success at USC. Bradford was USC's #2 RB in 2009 with 668 yards on 115 carries (5.8 avg.) with 8 TDs not to mention six tackles and a forced fumble on special teams and went on to be an honorable mention Pac-10 player. The book has a 2009 copyright and only covers through the 2008 season and it appears as if Bradford is no longer "languishing" at a position where USC has "talent to burn."

The book gets a couple of jabs in at Alabama for losing to Louisiana-Monroe and Utah, but does acknowledge that the SEC is the toughest conference in college football. I guess Alabama gets the last laugh after the 2009 campaign.

Though I do find some major flaws with the book (primarily going off on tangents and overall organization), it is an interesting and quick read at a mere 205 pages and one I recommend (with some reservation) to our readers that have interest in football outside of the SEC (and especially outside of the BCS conferences.) Like it or not, Boise is making some noise on the college football landscape. If Boise continues to be giant killers and sustains this level of success, there will certainly be other works written about them in the future.  Barbour's Blue Collar Mentality, despite its flaws is a welcome addition to the small amount of works on so-called "mid-majors."