Thoughts on Conference Expansion: The Issue of Timing

Share All sharing options for: Thoughts on Conference Expansion: The Issue of Timing

Currently, the Pac-10, the Big Ten, and the Big XII are in a race against time regarding conference expansion. Less than 48 hours after gaining the power to issue invitations to join an expanded Pac-10, the latest reports have commissioner Larry Scott putting that power to use:

According to Chip Brown of Orangebloods.com, "Scott will start extending invitations formally to six Big 12 schools this week."

Obviously Scott is trying to make this go as fast as possible. But why does timing matter? Yesterday morning I wrote:

That is an elongated response, of course, but the additional words cannot bury the underlying meaning of it. Put simply, if the Pac-10 decides to make a move in the next few weeks, the Big Ten will act immediately. Oh sure they may take their sweet damn time if given but the opportunity, but if the hand is pushed they will respond quickly.

The interesting thing about all of that, however, is that there does not necessarily need be a quick response. Aside from the Texas-to-the-Big-Ten rumors -- which realistically will never happen -- the Pac-10 and the Big Ten are not fighting over the same schools. The Pac-10 is not interested in the viable Big Ten expansion candidates, and by that I mean Notre Dame, Nebraska, Missouri, and schools from the Big East. In that vein, the Pac-10 and Big Ten could expand at their own volition without one being necessarily forced by the other, but in any event it does not seem like either conference will allow that.

Consider that poor writing on my part, as that excerpt perhaps gives the impression that timing is irrelevant because the Pac-10 and the Big Ten are not pursuing the same teams. In reality, however, not only is timing important, quite frankly timing is likely everything.

The short answer is because, while the two conferences are not pursuing the same schools, the actions of one directly impacts the counter-responses of both conferences seeking to expand and institutions exploring the possibility of joining a new conference.

The long answer requires a bit more of an in-depth look at all of the players involved, so let's delve into that.

At this point, we are all well aware of the deadline ultimatum that the Big XII recently issued to Nebraska and Missouri regarding their flirtations with an expanded Big Ten. While some have dismissed this as unenforceable on the part of the Big XII, the point remains that this ultimatum -- while admittedly unenforceable -- does play a key role in the developments that will follow. Silence will clearly be interpreted as confirmation of Big Ten flirtations, but if the Big XII is legitimately convinced that Nebraska and Missouri plan to remain members of the Big XII, then suddenly the odds of the Pac-10 successfully pursuing Texas and company are significantly lower. If Nebraska and Missouri remain in the Big XII and the current Big XII structure looks to remain intact, the incentive of Texas and company to spurn the Big XII for the Pac-10 are significantly reduced.

On the other hand, if Nebraska and Missouri either ignore the ultimatum or give an unconvincing response, rest assured that Larry Scott will seize on that instantly. Perhaps in as little as a few minutes, Scott will likely send out offers to Texas, Texas A&M, Texas Tech, and either Baylor or Colorado (likely Baylor) to join the expanded Pac-10 Conference. At that point, Texas will have a decision to make... either hold tight in the Big XII and live with the possibility of Nebraska and Missouri deserting the conference -- which would require a frantic search for two replacement members and what all that may entail --  or simply say to hell with it all, give Larry Scott a resounding yes, and watch the Big XII as we know it implode in their wake.

And then there is Notre Dame, who has somehow been somewhat forgotten in recent weeks in expansion talks. It should not be forgotten, however, that in all honesty the ideal scenario for the Big Ten is not to expand to sixteen teams, but to instead get Notre Dame, expand to twelve, and call it a day. To hell with Missouri and Pitt and willingly being the test balloon for the working feasibility of a sixteen team super-conference, the Big Ten has coveted Notre Dame forever now, and they would almost certainly discard any thoughts of adding anyone else if the powers-that-be in South Bend would stamp their golden ticket (no pun intended).

The Fighting Irish, however, are running out of time. By the looks of recent events, they do not have months to make a final decision, as had been indicated by the rough timetable that Big Ten officials have made public.

And simply put, Notre Dame can change everything. To illustrate this point, consider the following hypothetical... tomorrow morning, Notre Dame athletic director Jack Swarbrick calls Big Ten offices and speaks the following sentence, "All right, Notre Dame has decided it would be in our best interest to join the Big Ten." Then what happens?

Notre Dame becomes a member of the Big Ten. With a twelfth team in place, the Big Ten likely calls it a day and ends there, splitting into two divisions and scheduling a Big Ten Championship Game. Nebraska and Missouri have the proverbial door slammed in their faces, and they have no choice but to remain in the Big XII. The Big East institutions that would otherwise spurn their current conference are likewise locked in. The Pac-10 may still expand, but with Nebraska and Missouri being locked into the Big XII, it would be almost impossible for them to pull off a coup with the likes of Texas and Oklahoma. They may still expand by two teams in order to become a twelve team conference, but they would almost certainly lose out on any potential headliner additions and would instead have to settle with two choices from the likes of Colorado, Boise, Utah, and BYU. Meanwhile, the SEC would retain its current format, and both the Big East and the ACC would survive in their current form.

And again, all that would be required for that scenario to play is for Jack Swarbrick to wake up tomorrow morning and say, "All right, Notre Dame has decided it would be in our best interest to join the Big Ten."

Oh, and yes, guess what? Well look what we have here... 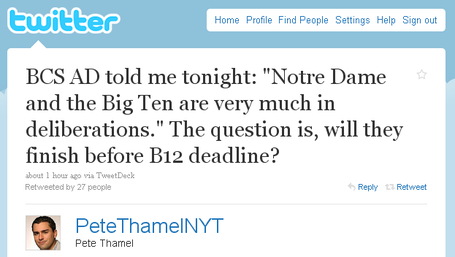 I've said it many times before and I will say reiterate it again here... Notre Dame, despite all of their previous denials, will get one final chance at joining the Big Ten. The Fighting Irish are just entirely too big of a prize and they have been coveted entirely too long by the Big Ten for that not to be the case. Maybe they turn them down yet again, but then again maybe they finally say yes. Either way, the question here is time.

If Notre Dame waits too long -- and in the current context, "too long" may mean merely another week (if that long) -- then they transform themselves from the ultimate power player to just another hapless bystander along for the ride. If the Big Ten indeed moves on with Nebraska and Missouri, which leaves the Big XII in turmoil, and teams from the Big East, suddenly Notre Dame either has to remain independent or be willing to join a 16-team Big Ten (something they would likely never consider). Put simply, it's now or never for Notre Dame and their independent status, and their decision will likely alter the landscape of college football one way or the other.

For the SEC, of course, time doesn't matter. With Texas all but off the table, the teams that the SEC will expand with will all be available even after the Big Ten and the Pac-10 finish doing whatever they are going to do, so for now the SEC is just munching on its proverbial popcorn. Likewise, the Mountain West has decided it to be in their best interest to just watch for a while and then try their hand at expansion in the wake of everyone else's moves:

Speaking at a press conference that's still ongoing as I type this, commissioner Craig Thompson announced that the conference would not be expanding, which means Boise State will remain in the WAC.  For now.
Citing the uncertainty on the collegiate landscape, Thompson stated that the conference's board opted not to make a decision to expand at this time.

The Pac-10, the Big Ten, and the Big XII, however, have no such luxury. Time is not just a factor here, it could very well be the determining factor. The notion that the Big Ten has been purporting for some time now, that the process would be slow and deliberate and that expansion would not happen for months, looks highly unlikely to come to fruition. Unless something happens to apply the brakes, it seems that the expansion movement may break in the coming days and the institutions that fire the first shot will play a major role in how expansion will play out across the college football landscape.