Things To Freak Out About for 2010: Coaching Attrition

Share All sharing options for: Things To Freak Out About for 2010: Coaching Attrition

Last December, as Alabama was preparing for its first National Championship game in a generation, the future of the team's Frank Broyles Award-winning Defensive Coordinator Kirby Smart was very much the center of debate. From the moment Georgia showed beleaguered DC  Willie Martinez the door last December, Smart was at the top of Dawg Nation's list of replacements. While the former Georgia player and coach was pursued heavily by his alma mater, Smart eventually declined the offer and Georgia chose another Saban protege, Todd Grantham, instead.

And he's not the only one on Saban's staff being eyed enviously by Athletic Directors of other schools (not to mention the fanbases). Crimson Tide offensive coordinator Jim McElwain has been wooed for head coach by the likes of San Jose State, Marshall, UNLV and Louisville and it's more likely than not that his name will continue to come up as HC vacancies emerge.

Alabama should prepare themselves for the parade of programs looking to lure it's coaches away and the wild-haired media speculation that traditionally accompanies it. And as the annual coaching bloodbath starts in mid-November or so, that's a good two months of distractions for a Crimson Tide team that needs to focus on key post-season games.

For his part, Smart downplayed the situation in January saying that his lifelong goal was to be a defensive coordinator: "If I ever got a chance at a head job, that’s great. But that’s not something I’m going to draw my career, and say, ‘You know what, I’m a failure (because) I didn’t get to be a head coach.'"

Which did wonders to quell the speculation and keep the issue from becoming too much of a distraction heading into the contest with the Texas Longhorns in Pasadena... but that sentiment is not likely to diffuse the almost certain repeat of the situation next season.

In light of the furor around Smart last year, Saban made an interesting comment about his coaches departing for other positions:

I'm not pleased when guys make lateral moves because it's a little bit human nature to think – like my dad used to say, the grass is always greener on top of the septic tank. You always think it's better someplace else.

Quite a few folks took the comment as a personal affront and missed his point entirely. One of the natural results from working in a successful program is to be courted by other programs who want to emulate that success. The success of Saban's assistants elsewhere is a testament to this. But it does nobody any good if a quality coach takes a job that is a bad fit professionally.

And Coach Saban obviously puts a lot of effort in in finding coaches for his staff that fit his system precisely. Saban brought Kirby Smart with him to Tuscaloosa in 2007 and named him the defensive coordinator shortly afterward. McElwain was the OC at Fresno State when Saban tapped him in 2008 to take over the position at Alabama in the wake of Major Applewhite's departure for Texas after one year in the position. With the pair at the helm, Alabama has seen an astonishing improvement in performance.

While the head coach is answerable for the win/loss record, the coordinators must account for the ability of the team to score and be scored upon. The overall production on the field is a component of this that bears examination as well. Looking at both the points per game and yards per play over the past six years, there's a marked improvement on both sides of the ball since McElwain and Smart took over their respective positions.

Since Smart has been coordinator, an already good defense has undergone substantial improvement. Opposing offenses now produce a yard less per play when running the ball and there has been a 25% reduction in pass efficiency against the Crimson Tide defense -- the latter of particular significance as the defensive secondary is also part of Smart's job description.

It's a mirror image on offense under McElwain. Alabama's running game has improved by a yard-and-a-half per carry since 2007 and the team's passing rating of 138.46 last year was almost 20% better than under Applewhite.

While there remain key elements of Alabama's game that need to show improvement, the overall trend for both the offense and the defense has been unmistakable. And that's only one part of the package Smart and McElwain have to offer. They've got an almost unparalleled familiarity with Saban's highly successful recruiting system - something other programs are eager to replicate. 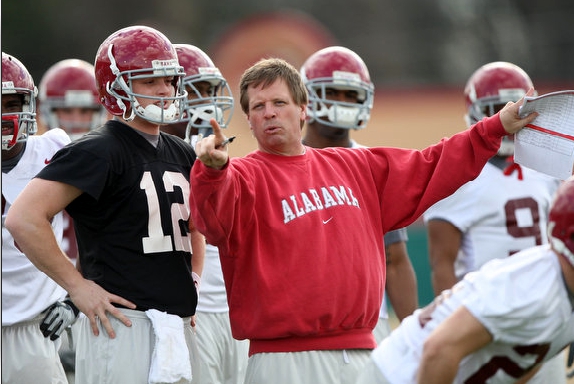 END_OF_DOCUMENT_TOKEN_TO_BE_REPLACED

Working under Saban is, once again, a sterling credential in this department for up and coming coaches. While Coach Saban gets the credit for the program's three straight top-five recruiting classes, the fact is the real work is done by his coaching staff (particularly since new rules restricting head coach's access to players have been created).

McElwain and Smart each have key recruiting responsibilities for Alabama. This year McElwain has snagged the commitment of five-star safety Ha'Sean Clinton-Dix while Smart has convinced four-star defensive end La Michael Fanning to play for the Crimson Tide. So they both have a proven record for luring top flight talent to play for them.

While coaching attrition is a certainty for any successful program, Coach Saban has taken steps to limit it's effect to the on-field product. The most obvious step was in netting raises for the key personnel on his staff.

The pay raises don't ensure he coaches will stay at The Capstone indefinitely, but they do mean that programs wanting to woo key people away from Saban's staff will have to pay them on par in what they are worth. Instead of a revolving door of assistants, it creates a more manageable stability in terms of coaching turnover.

But turnover in the coaching staff is inevitable as losing key players to the NFL draft and it's a  situation Alabama is going to have to weather every season for as long as Coach Saban is running the show.