Yea Alabama 2010: Go Forth and Consume

Share All sharing options for: Yea Alabama 2010: Go Forth and Consume

At long last, folks, it is here. The fourth edition of Yea Alabama, available for pre-order now and available on newsstands later this month: 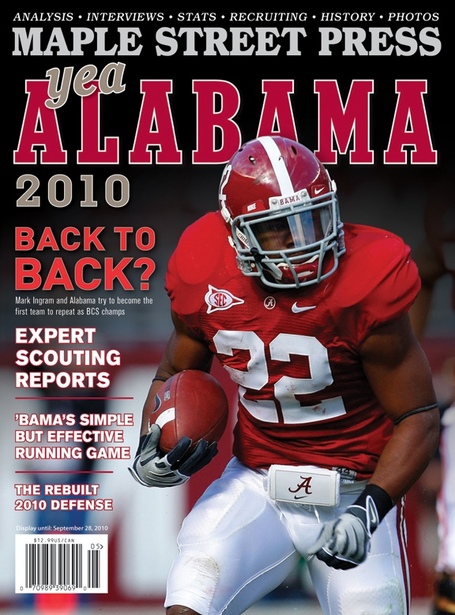 Yea Alabama 2010 prepares the Alabama fan for the upcoming title defense with detailed player and opponent profiles, as well as in-depth and entertaining features on the team's recruiting and play calling. Of course, no Alabama publication would be complete without a look back at the storied history of the program, including last year's magical run. Edited by Todd Jones and Joel Gamble of RollBamaRoll.com, Yea Alabama is 128 pages of the most in-depth and entertaining Crimson Tide analysis available anywhere.

As mentioned earlier, this is the fourth edition of Yea Alabama, and after browsing through the copy MSP sent out the other day, I must say that I think this one is the best we've published to yet. Some of the articles and authors who contributed this year include:

Finally, yours truly has a few pieces this year, including:

All in all, it's been a lot of work, but we are exceedingly proud of the final product and hopefully you'll all find it was worth it.  Pre-orders should ship in the next few days and hard copies will be available on newsstands later this month, so go ahead and reserve your copy.