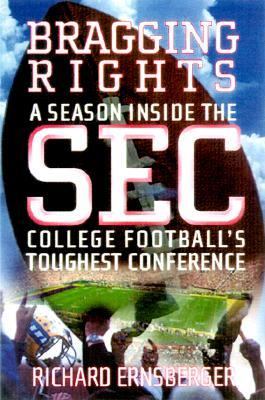 This week, Roll Bama Roll has invited CocknFire of Team Speed Kills -- the SB Nation website covering all things pertaining to the Southeastern Conference -- to review Bragging Rights: A Season Inside the SEC, College Football’s Toughest Conference, the Richard Ernsberger Jr. book on the 1999 football season in the greatest conference in the country.

By the time you get two-thirds of the way into Bragging Rights: A Season Inside the SEC, College Football’s Toughest Conference, you realize something. (Aside from the fact that the book, by Richard Ernsberger Jr., has a really long title.) You notice that for a book about a football season, it has very little football in it.

In fact, the realization that this is probably going to be the case might have already struck you in the introduction to the book, where Ernsberger lists five regular season games -- out of 96 -- that he and his "reporting associates" attended. Three of those games, plus the SEC Championship Game, warrant their own chapters: Tennessee-Florida, Auburn-Alabama and Georgia-Florida.

At one point, the book goes 124 pages -- out of 344 -- between football games. The actual narrative of the SEC Championship Game -- after the scene-setting and before the reflection on it -- begins at the bottom of page 318 and ends at the top of page 320.

Which makes it obvious that this is not an "insider’s" account in the manner of (to use a political example) The System, David Broder and Haynes Johnson’s classic account of the collapse of Clinton’s health-care push in 1993-94, which goes over all the process and strategy that politicos love. This is in the mold of Game Change, a retelling of the 2008 election that has been criticized as gossipy and character-heavy -- more mass appeal, perhaps, and a "better" story.

South Carolina warrants few mentions, and then usually as "the worst team in the SEC." (Even as a Gamecock, I can’t argue much; they were 0-11 that year. But a great story about Lou Holtz‘s first game, in which South Carolina played N.C. State in the middle of a tropical storm … nowhere to be found.) Arkansas? Who’s Arkansas? Ole Miss? Actual quote from the book: "My biggest regret is that I was unable to write a chapter about the Grove, as I’d planned. I simply did not have the time." Did not have the time?

You might be tempted to say at this point that Ernsberger is focusing on the powerhouse teams in the conference. But there’s an entire chapter on Vanderbilt, "a place for people (here is the stereotype) who wear glasses, speak well, floss regularly and average 1,300 on their SAT test." (Ernsberger, in case you're wondering, is a southerner who just doesn't seem to care if he's reinforcing stereotypes about the region.)

And Alabama -- the conference champion in 1999 -- gets relatively little on-field treatment. (The Iron Bowl chapter is entitled: "Reflected Glory: Auburn Versus Itself (and Alabama).")

In addition to that, there are enough factual questions to make you wonder who edited the book. Ernsberger recounts Spurrier’s game-winning kick against Auburn in 1966. Then:

Let’s move ahead sixteen years.… ["…" Ernsberger’s; manuscript not cut.] In the fall of 1992, Steve Spurrier is standing on the Florida practice field.

Except that’s 26 years. I know, because I thought it looked wrong and checked in on my calculator, which took all of 30 seconds.

In the middle of the book, Ernsberger decides to provide a list of the best coaches for reasons passing understanding. (The author’s best explanation is: Americans and sports fans love their lists!) His defense of Lou Holtz as a top-tier coach begins:

How can a guy who has won one game in two years, who was winless last year (zip and 11) make the top tier?

Which is even more amazing when you consider that Holtz had not won a game in two years at all, having not coached the Gamecocks (or any other NCAA football team) in 1998. Of course, Holtz is also described as "by far the most articulate coach" in the SEC, something that will come as a surprise to anyone who’s ever watched his ESPN appearances.

Those are just a couple of the factual errors that run through the book, little things that don’t undermine the narrative so much as drive someone who knows better crazy.

There are also other interesting character judgments. On Lynn Lang, the high-school coach of Albert Means:

But over time I grew to like him. Beneath the occasional blather, he seems a more than decent man.

This is in the middle of a section, mind you, about Lang’s suspicious purchase of a Ford Expedition after Means was recruited. As I doubt I have to remind Alabama fans, Lang later pleaded guilty to racketeering-related charges as part of a conspiracy to get Means to go to Alabama.

And there are weird formatting decisions in the book -- chapters that serve almost as glorified charts, one that’s a group interview with three LSU players, the coaching list as Chapter Twelve because … well, because every book needs a Chapter Twelve.

It’s not that the book is bad. There are some truly great chapters in the book; Ernsberger is in his element profiling players and coaches. Some of his vignettes about players like Shaun Alexander and Quincy Carter are beautifully drawn. "The Memphis Avengers," a chapter about the battle between Roy Adams and Logan Young (who would be convicted in the Means case), is a great look at boosters. Steve Spurrier and Phil Fulmer are just as fascinating profiled in print as their football battles were on the field.

And reading the book 10 years after it was published leaves you with a sense that some of the concerns about college football -- How do you reconcile the academics with the athletics? Is it fair to place this much pressure about where to go to college on 17- and 18-year-olds? Just how much cheating does go on in recruiting? -- are still with us today.

Ernsberger covers the rise of the recruiting services, mentions the Internet message boards that were emerging by 1999 and warns that the SEC might be catching up with Spurrier’s pass-happy offense.

The days when Florida and Tennessee played with SEC titles on the line and when South Carolina was the worst team in the conference might be gone, but a lot of the deeper trends that have shaped the sport continue. And Ernsberger captures many of those trends.

You’re just left wishing that he had spent as much time on the field as off it.

During the season you can find cocknfire at his usual haunts over at Team Speed Kills and on occasion at the SB Nation South Carolina site Garnet & Black Attack which he contributes to while wailing and gnashing his teeth as his coach attempts end zone fade after end zone fade against Alabama's secondary.