Looking Back at the 2008 Chick-fil-A Kickoff Game

Share All sharing options for: Looking Back at the 2008 Chick-fil-A Kickoff Game

Two years ago, our beloved Alabama football team was coming off a shaky 7-6 inaugural season under Coach Nick Saban and there were a lot more questions in the air than answers. The squad was widely seen as at least a year away from competing in the SEC West much less at the national level of college football.

And the first game of the 2008 season was expected to be a doozy, since the Bama had agreed to take part in the first Chick-fil-A Kickoff Game. That meant they faced the highly touted Clemson Tigers in a nationally-televised prime-time contest in the Georgia Dome.

Going into the game Clemson was ranked ninth in the nation and heavily favored over the No. 25 Tide. Despite the underdog status, some of the more learned observers predicted Alabama would provide a hard-fought contest. Both camps turned out to be wrong as what transpired was more along the lines of this... 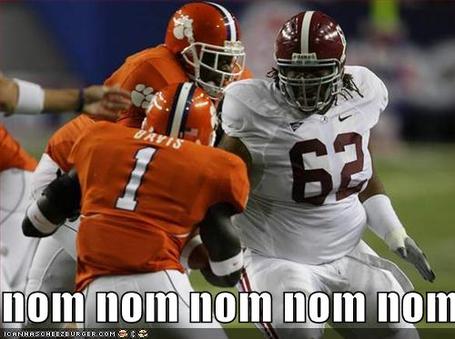 That game proved to be a turning point for both teams. As you are all well aware, Alabama went on to rip off a pair of undefeated regular seasons and a National Championship. The Tigers dumped their coach two months later and began the painful process of rebuilding. And the Chick-fil-A Kickoff Game became renowned as the killing field for highly-touted ACC teams at the hands of the the SEC in general and the Crimson Tide in particular.

The SB Nation's blog covering the Tigers, Shakin the Southland, is here to help. They are giving a detailed look at this contest and its impacts on the Clemson's football program. They started off yesterday with a superb examination of the game and followed it today with a detailed a breakdown of its aftermath.  Their blunt assesment is as follows:

Alabama simply whipped Clemson's ass. In all phases of this game, the Tigers were completely dominated and simply embarrassed on national television. Clemson--and its coach--were once again proven to be chokers who were unable to build on momentum and definitely unable to nut up and win when placed on the national stage.

Why should we care? This is all ancient history, right? Not exactly. As obvious all all these things seem to us today, it's worth stepping back to August of 2008 and noting they were not at all clear cut to any reasonable observer.

While I certainly agree with Coach Saban that crowing over past victories doesn't due much to assure there will be further success in the future I also humbly suggest it's a valuable exercise if for no other reason than attaining the right perspective for 2010.

Because back in July of 2008, Alabama was widely viewed a team with a lot of potential but hobbled due to major issues. Lack of depth, a new offensive coordinator and a tumultuous off-season had led some to even surmise Saban was on the hot seat. Instead, the Crimson Tide went out in that game and did what Coach Saban taught them to do -- flat out dominate the opposition.

It's clear that the 2010 team has more talent and experience than the 2008 model. And while there are serious obstacles facing this year's squad I have a hard time believing they are more dire than those from two years ago. Yes, expectations are higher, but as long as that will to achieve greatness we saw in that Clemson game is still there there is no reason to believe this season will be anything short of sensational.