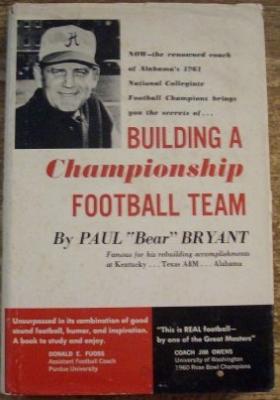 Despite continued deification and worship, I would argue that by and large very few people have a good understanding of Paul Bryant as a football coach. Almost thirty years after his death, in my ways Bryant has been reduced to the status of a mere figurehead. The substance of the football coach has been lost amidst the re-telling of the same ol' boring stories over and over, complete with a bunch of football axioms that he supposedly lived by but really didn't. Fortunately, to remedy such shortcomings, we have Building a Championship Football Team.

Originally published in 1960, almost two years before he secured his first of six national championships, Building a Championship Football Team can rightly be considered the magnum opus of Paul Bryant on football. The book was actually ghost written by his young assistant, Gene Stallings, but in any event nevertheless gets to the very heart of Bryant's views on the importance of football as a sport and exactly how to go about building a winner.

To be frank, this is not the typical book written by a football coach, or a sports figure for that matter. Usually in books like this you have a coach who writes a book with no real substance just to make a couple of bucks and to get a little bit of exposure for himself and his program. All serious topics are usually ignored, and in their place you see a few anecdotes and some nostalgic ramblings about favorite players and memorable games, thereby rendering the final product both a waste of ink and paper to print and a waste of time to read. This book, however, is clearly an exception to that general rule. It's in-depth, on-point, and comprehensive in its discussion of just about every aspect of the game of football.

In hindsight, arguably the real surprise with the book is that it was ever written in the first place. Absolutely nothing whatsoever is spared. This book has everything you can imagine on football, and I do mean everything. If any opposing coach wanted a deep and meaningful understanding of just how Bryant operated, after 1960 he only needed to go down to his local bookstore. Just about every conceivable topic is covered, all the way from organizational planning to offensive and defensive schemes to practice drills to off-season preparation. In many ways, reading the work reminds you of George C. Scott's famous line in Patton, "Rommel... you magnificent bastard, I read your book!"

The book goes into such maniacal detail that even the exact specifics of the team meals throughout the week are listed, all the way down to how the exactly how the entrees are to be prepared .For example, the typical Friday evening dinner menu prior to a game is listed as:

One pint of milk or iced tea

And, of course, when you detail exactly how the steak must be cooked and how much ice cream is to be doled out and of what flavor, it's clear that no detail has been spared.

Furthermore, Building a Championship Football Team serves as a definitive rebuttal to many of the mistaken assumptions of Bryant as a football coach. For example, all of us have heard the supposed Bryant belief that "three things can happen when you throw the football, and two of them are bad," a statement which is frequently cited in support of the need for a run-heavy offensive attack. In reality, though, Bryant expressly refuted that statement several times in his coaching career -- he explicitly denied being the man behind the statement, and in any event found it to be useless because clearly more than three things can happen when you throw the football -- and in the book what we see is, in fact, a coach who understands how important the passing game can be, for both the offense and the defense, and how crucial it is to excel in that regard in order to win. Many other similar examples can be cited here, but the underlying point of all of them is that this book helps divorce myth from man.

Perhaps most of all, though, this book serves to showcase how Bryant viewed football as a way to prepare for the future off the field. Football was not just a game to him, but of more fundamental importance a way of teaching the difficult lessons of life and a way of helping transform boys into men -- something Bryant makes examples of several times throughout the book with specific references to the Junction Boys. Perhaps most telling, regarding the intrinsic value of the game, Bryant writes:

Not only is football a great and worthwhile sport because it teaches fair play and discipline, but it also teaches the number one way of American life -- to win. We are living in an era where all our sympathy and interest goes to the person who is the winner. In order to stay abreast with the best, we must also win. The most advantageous and serviceable lesson that we can derive from football is the intrinsic value of winning. It is not the mere winning of the game, but it is teaching the boys to win the hectic battle over themselves that is important. Sure, winning the game is important, and I would be the last to say that it wasn't, but helping the boy to develop his poise and confidence, pride in himself and his undertakings, teaching him to give that little extra effort are the real objectives of teaching winning football.

If I had my choice of either winning the game or winning the faith of a boy, I would choose the latter. There is no greater reward for a coach than to see his players achieve their goals in life and to know he had some small part in the success of the boys' endeavors.

Finally, at the risk of sounding like an Alabama homer desperate to make comparisons, reading this book it is indeed striking to see the resemblance of Bryant to the man currently in charge in Tuscaloosa. Much like Saban, Bryant did not just happen to win a lot of football games, there were reasons behind it. Football consumed him, and he approached the game as if he was maniacally obsessed with it (which he clearly was). No detail was ever too small, and no amount of work put in -- no matter how long and ridiculous the hours, and remember, the 18-hour work-day was the norm for Bryant -- was ever nearly enough. Again, in that regard, the similarities are striking. For example, given Saban's frenzied practice sessions in preparation for an upcoming opponent, one Bryant passage in particular almost jumps off the page:

Coaching football is a race against time. Time lost on the practice field can never be regained. We attempt to utilize every minute possible in preparing for our opponents and our practice sessions.

In reviewing this book, only two shortcomings stand out. First, and perhaps most troubling for the reader, is that while much of the book is very readable, it is in many ways a book largely defined by its discussion of football strategy. For a reader unaware of many of the strategic concepts and terminology of the game, that makes a large portion of the book a difficult read. It's not impossible, mind you, but it's something that will take a few passes to properly grasp. Of secondary concern to the reader, however, is that this can be somewhat of a difficult book to find. While it was a commercial success -- it had six different publishings by 1966 -- the book is no longer in print, and many of the remaining copies that are well-maintained can be somewhat expensive. Fortunately, though, you can find some cheaper copies with some wear and tear, and you may be able to locate a copy for free at your local library.

Nevertheless, those shortcomings are minor in nature and should not excuse the reader from picking up this title. It's all here, all the way down to exactly how he graded game film and precisely what characteristics he looked for in assistant coaches. If you really want to learn about Bryant the man and Bryant the coach -- as opposed to Bryant the myth and Bryant the legend -- this book must be your starting point.

Note: Special thanks to Kleph for sending me a copy of this book for review.