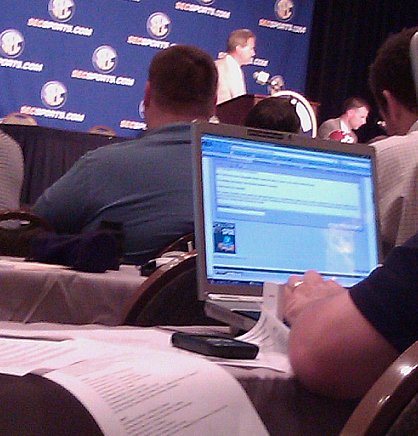 The view from the trenches.

Day 1 of the SEC's annual three day, three ring circus is in the books and it left us with a few noteworthy soundbites (which is good in a room full of people desperately craving soundbites.) Our own illustrious Nick Saban easily took home the gold with his now famous quip about rogue agents:

"The agents that do this — and I hate to say this, but how are they any better than a pimp?"

The statement is certainly newsworthy after what feels like an endless parade of agent related problems at several universities including North Carolina, South Carolina, Florida and Georgia in addition to Alabama. Saban stated he was in favor of measures where agents can be suspended for compromising the eligibility of college players and further stated that hitting these guys in theirs wallets would be about the only way they would stop.

Other interesting things Saban touched on:

<fanboy> I have, of course, seen Saban speak at post-game press conferences, on his coach's show, and in interviews, etc., but I have to say the man is an exceptionally engaging speaker in person. He had the entire room dangling on his every word. There was a lot of chit chat and movement around the room when Dan Mullen was speaking, but everyone was rapt with attention when Saban was on the podium. On twitter earlier today, I likened his ability to speak at length and still be compelling to that of Henry Rollins. It's really not a peculiar comparison given how insanely focused and driven the two of them are and how they both seem to have a pathological hatred towards anything that stands in the way of achieving their goals. Intensity is interesting I guess. </fanboy> 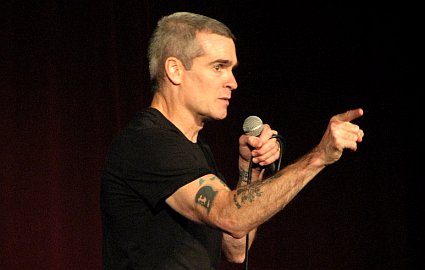 Regarding the Mark Ingram portion of the show, Holly pretty much hit the nail on the head about the ridiculously soft questions he was being asked:

Mark Ingram is the featured player interviewee, and is being asked every bullshit question under the sun, from who his best friends on the team are to how he handles the horrific pressures of invites to the Playboy Mansion.

At this point, Holly and I were joking that we should ask Ingram which mythological creature he preferred: unicorns or minotaurs?

After Saban and Ingram, the exodus from the room before Dan Mullen stepped up to the mic could only be likened to that of the 1947 partition of India. That being said, Mullen's presser wasn't a total snooze in that he got a jab in at Saban after a reporter mentioned Saban said he thought pro-style offenses better prepared college players for the pros than spread offenses:

“I’ve had a lot more first round quarterbacks drafted than he has…We also had the NFL Offensive Rookie of the Year last year in Percy Harvin. A lot of people say that about the spread, but factually the offense prepares players better than other offenses.

Earlier in the day, Mike Slive delivered a gem when mentioning there were three new coaches in the league, noting that two came to their position through the retirement of their predecessors and the other job was vacated because the coach was reconnecting with his "western roots." Big laughs all around. He then went on to welcome Derek Dooley by name while avoiding specific mention of Kiffen. Spencer said it best when he said that Slive "holds his switchblade with a velvet glove."

I only managed to see Slive, Saban and Mullen today because real life rudely intruded and prevented me from seeing Joker Philips and Urban Meyer. I should be able to see just about everyone tomorrow and everyone on Friday. Hopefully the wi-fi at the Wynfrey will be a fully operational mothership on Thursday and I'll be able to do more live updates.