Stadiums I've Been To: Sanford Stadium

Share All sharing options for: Stadiums I've Been To: Sanford Stadium

The blackout. Mmmmmmmmm. I don't think we'll ever tire of stories from the famous blackout game. That was a weekend to remember for me, not only as an Alabama fan, but also on a personal level as it was one of those "leave the house with no real plan" kind of weekends. I made new friends, saw a great concert and experienced opposing fans hostile enough to make me hope I made it through the weekend unscathed. I had a plan, but it went semi-askew when a photographer buddy of mine that was going with me had to bail on the trip when a last minute, lucrative photo shoot was presented to him.

Normally setting off on my own wouldn't be a big deal, but there were some obstacles to this being a normal football weekend for anyone. Hurricane Ike had ripped through recently and greatly impacted fuel supply routes and Georgia in particular was hit rather hard by these interrupted routes. There were several stories warning of gas shortages and that the game traffic would further drain already strained resources for the Athens area. The situation was so dire in fact that Atlanta-based oil executive Tex Pitfield publicly called on Georgia Governor Sonny Perdue to cancel the game and expressed his concern on local radio about how it would impact the citizens of Georgia:

"That is just a huge amount of gasoline that this structure, this system, this state cannot handle the expenditure on right now. That gas needs to be used for people to go to work and for people to take care of their families."

Obviously there was no way that was going to stop me or any other football fan in his or her right mind. My plan was to fill up in Birmingham before I left, fill up again somewhere between Anniston and the state line and then fill up again on the outskirts of Atlanta if possible and hoping I could make it back to a gas station that actually had gas before I ran out for the return trip on Sunday. I opted for heading over on Friday knowing the traffic wouldn't be nearly as bad and I didn't want to burn up precious fuel idling in my car in gameday traffic. So, I set out on Friday afternoon, with no real idea of where I was going to sleep that night. 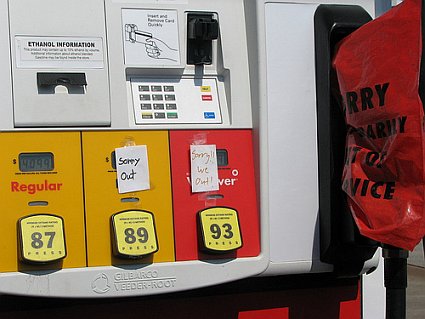 A common site on that trip.

Normally I would've just stayed in Atlanta with friends there, but given the fuel shortage, I didn't want any part of gameday traffic, so I decided to head onto Athens even with accommodations (or lack thereof as it were) still a huge question mark.  A close friend of mine (who doesn't like football) went to school at UGA (and didn't attend a single game there in four years) still had quite a few friends in the area so I put a call into him to see if he could drum up a place for me to stay for the night. He called and called and called and got nothing but voicemails. He said he left my number for all of them to give me a call and that he did the best he could. He wished me luck, I said "thanks" and hoped some friend of a friend would eventually call me offering me a place to sleep. But first, there was music to be heard.

Atlas Sound, one of my favorite currently active bands was opening up for underground lounge legends Stereolab in Atlanta that night at the Variety Playhouse. It was a double bill that really couldn't be missed considering it was on the way and only a couple of miles off of the interstate. I was sporting a Bama t-shirt at the show and got a few cheers (and free beers) and quite a few jeers from those in attendance. Atlas Sound was fantastic. Stereolab was good, but they would've been better to see in the 90s. At some point during Stereolab's set, I get a phone call from a number I don't recognize but with a 706 area code (an Athens number!) and it's a friend of my friend offering to put me up for the night. He says, "What part of Athens are you in? I'll come get you." I said, "I'm kind of in the Atlanta part right now seeing Stereolab, but I'll leave." He told me to enjoy the show and to head over afterward and that he'd be up late anyway. I eventually make it to Athens and this guy and his wife are both super cool. We stay up to the wee hours drinking ouzo after we discovered all of us had recently been to Greece as well as swapping stories about our mutual friend.

I drive near campus and find myself a nice $40 parking space (one of the cheapest I saw.) A Bama fan friend of mine was tailgating with some Georgia fan relatives and I was invited to their tailgate, so I set off to navigate the unfamiliar landscape in order to find my party. I probably wasn't 25 yards away from my car when one of the drunkest people I've ever encountered screams at me "Go back to Alabama you f***ing redneck" in one of the thickest drawls I've ever heard. Oh, irony, you are so tasty and delicious in the morning.

I eventually found my tailgate and was treated to both food and beverage by some of UGA's most gracious fans. After swapping stories and some good natured trash talking about the game, I then I set off to meet some other Bama folk at another tailgate on what was possibly the the most distant point imaginable from where I was presently tailgating. That was kind of a lonely walk. I got a lot of aggressive shoulder bumps on that walk not to mention that I was the target of a lot of not-so-good-natured name calling. It was starting to get late and as the 8:00 pm kickoff drew near, the intensity began to ramp up as people got more alcohol in them and nerves about the game intensified. I started to not feel so good about walking around by myself. 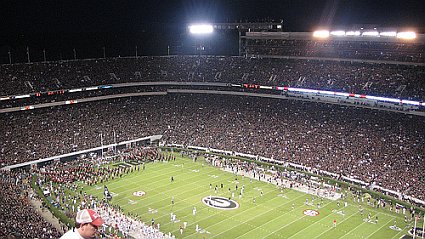 You've gotta give 'em credit, it did look cool.

I eventually met up with folks and had a good time and as we were making our way into the stadium some belligerent UGA fan started yelling at me. I guess I'd finally had enough of being harassed by the Dawg faithful and said back to the guy, "I hope you've enjoyed the season so far, because you won't even get a sniff at the national championship when we're done with you tonight." Needless to say, that guy wasn't too thrilled and started yelling at me some more. Oh well, thankfully security was all over the place and I wasn't the one yelling or drawing attention to myself.

Needless to say, y'all know what happened next....

That was fun. Especially after a day of taking insane amounts of crap off of people. I had a single ticket and was, of course, sitting around a bunch of guys I didn't know. Surprisingly, they too had come over to the game solo and like me, weren't relishing the idea of navigating Athens at night by themselves all whilst trying to avoid dejected, alcohol-fueled Georgia fans looking to take their aggression out on Alabama fans. These guys had walked a couple of miles from their respective hotels and all of a sudden, the walk back seemed like a bad idea, so I struck a deal with them: "You guys walk me to my car and I'll drop you off at your hotels." Safety in numbers folks. The walk to the car was thankfully uneventful besides a few not-so-gregarious taunts from Georgia fans and few apologies from other Georgia fans hearing said taunts. Despite all of the inhospitable fans I ran into, the trip to Athens definitely ranks among my 2-3 favorite football road trips ever.